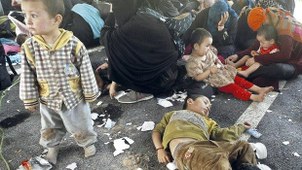 ‘We Feared They Would Kill us if we Were Sent Back to China’: Uyghur Mother Who Fled to Thailand

Patima and her children detained in Thailand for six months before resettling in Turkey.

A feminist and rights activist born after the 1989 Tiananmen massacre talks about its impact on her, growing up in China.

‘She Might be Out, But She’s Under Surveillance’: Sister of Uyghur Former Camp Detainee

Gulzire Taschmamat describes hearing from her sister for the first time since her detention in 2017.

Zhao Huaiguo is taken away by state security police, ostensibly for posting about the coronavirus epidemic on social media.

Elnur Sidiq discusses her husband’s detention and the uncertainty of his situation.

Li Qiaochu is being held at an unknown location after playing a prominent role in social justice movements in China.

Interview: ‘To Fight for Truth is a Great Calling’

Nanjing resident Jin Yan roasts the Chinese president in a social media video for failing in the battle of "good vs. evil."

‘If They Hadn’t Tortured My Husband, He Wouldn’t Have Fallen Into a Coma’

A Uyghur mother of two says her husband’s interrogation in detention led to his death.

'I Don't Think This Could Ever Happen in China': Interview

Ren Ruiting, fled to Taiwan with five other family members after Chinese authorities raided her church shares her reaction to watching her first fully democratic election.

Li Wenzu, who has campaigned tirelessly for the families of those affected by a crackdown on China's legal profession, evaded state security police in order to receive it.

'We Will Stay Committed to Peaceful Forms of Protest'

Bonnie Leung says the people of Hong Kong aren't afraid to face danger in pursuit of democracy, and calls for international support.

Huang Chun, a retired professor from the Guizhou Nationalities University, describes being held in a facility that issued no official documents.

‘So Many Women Are Standing on The Front Line’

A student leader and anti-extradition activist talks about the role of Hong Kong women in the four-month-old protest movement.

Wang Shuping refused until the last to bow to pressure from the Chinese state security police, publishing a statement of defiance in the last weeks of her life.

Wang Quanzhang's memory and personality appear to have been profoundly affected following years of incommunicado detention, his wife says.

‘This Has Been Delayed For Too Long’

Taiwan author Chi Pang-yuan speaks about infusing the next generation with a love of world literature.

'I Have Seen China's Dark Side, So I am Even More Determined'

Rights activist and petitioner Li Yufeng vows to continue her rights activism after serving a four-year jail term for speaking up.

'Anything Your Enemies Teach You is Valuable'

Lee Ching-yu talks to journalists during a trip to the U.S., where she attends the State of the Union address.

Women in the News

Relocated an hour an a half a way, some women return to the Cambodian capital to work as prostitutes.

Interview: 'All That Matters Is Sombath Be Found Quickly And Returned Safely'

One year after his disappearance, Lao civil society leader Sombath Somphone's wife says she can do nothing but hope for his return.

Behind most dissidents and activists is a wife who quietly supports his cause and struggles just as much. They speak to the media when their husbands are in prison, they protest and plead authorities - often to no avail. They are creative like Chinese activist Hu Jia's wife Zeng Jinyan, who became a famous blogger, or just holding on and being pillars of strength for their husbands.

The dissidents' wives are extraordinary women, fighting in their own way for freedom of information and human dignity. When they speak up, they open the world’s eyes to the very high cost paid by their families.