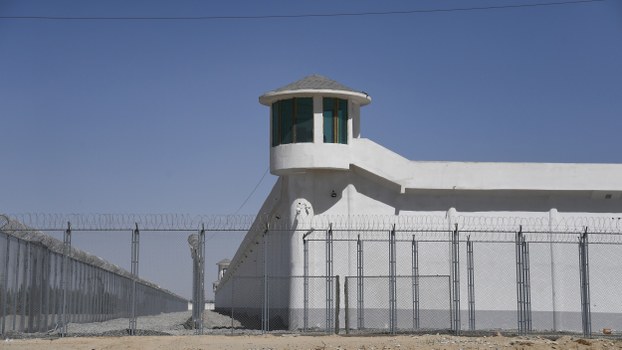 Elnur Sidiq, a Uyghur mother of four who lives in exile in Turkey, last heard from her husband Muhemmet Imin Abdulla in March of 2017 before he disappeared back home in northwest China’s Xinjiang Uyghur Autonomous Region (XUAR). She learned from sources in the region the following year that Abdulla, the head of traditional medicine wholesaler Xinjiang Tangnuri Co., was detained in an internment camp beginning in October 2017 and sentenced to 15 years in prison in 2018. While Sidiq is certain her husband is being held in a jail in the XUAR capital Urumqi, she doesn’t know which one, and has no information about his legal status or well-being.

Sidiq recently told RFA’s Uyghur Service that she believes Abdulla was targeted for maintaining financial ties abroad—including sending money to his family in Turkey—and for traveling overseas to countries Chinese authorities have blacklisted Uyghurs from visiting, citing a fear of Islamic radicalization. She noted that four of Abdulla’s uncles and two of his younger brothers have also been detained in their hometown of Hotan (in Chinese, Hetian).

RFA spoke with Sidiq, as well as her 10-year-old daughter Fatime, about how they learned of Abdulla’s imprisonment and the hardships they endure, wondering if they will ever see him again.

Sidiq: The last time he came [to Turkey] was in 2016. He wasn’t able to come back after that. He traveled through Dubai, he always traveled through Dubai. He returned to our homeland and told me he’d made it safely. After that I messaged him several different times but never got a response.

In the fall of 2016, he left [Turkey], and in March 2017 he disappeared. I have a close friend, someone who knows my family really well. When I checked with her, she said, “He’s gone to study” [a euphemism for someone who has been detained in an internment camp], over the telephone. She said he’d gone to study in March or April of 2017. I asked her to pass on a few things to him. Later, my friend’s husband passed away during an interrogation at the airport. And thus, we lost contact.

RFA: Did they not say which prison he’s in?

Sidiq: They didn’t say which prison he’s in, but they said he’s in an Urumqi prison and sent a picture of the prison from the outside. Later, when word started getting out about [the authorities] transferring middle-aged people to prisons in the interior [of China], we looked into [my husband’s case] again. [The policeman] said he was still there and hadn’t been moved, and he sent a photo of the prison. So, it was clear that he hadn’t been transferred. We asked again in March and April of 2019. At that time, the policeman sent a message asking that we stop seeking his help. We haven’t been in touch with the policeman since.

RFA: What line of business was your husband involved in Urumqi?

Sidiq: He went to Urumqi [from Hotan] in the 1990s to do business, wholesaling traditional medicines. He started a company called Xinjiang Tangnuri in 2006 … Basically, we dealt in saffron, cardamom, other spices and medicines used in Uyghur medicine. We sourced the medicines from private individuals, from farmers, and then we sold them wholesale. We sold the medicines wholesale to the large hospitals practicing traditional Uyghur medicine in [the cities of] Hotan, Korla (Kuerle), Kashgar (Kashi), and Urumqi … For a while we imported medicines from Pakistan.

RFA: What has been the fate of the company?

I believe it’s been more than five years now since we came to Turkey. I lost contact with both of my older sisters right about a year after I left. They were in Ghulja (Yining) city. My father and two older sisters, up to now we’ve had no contact with each other.

RFA: So, as for his health and how he’s doing in prison, do you really have absolutely no news?

Sidiq: I went looking for help from a cousin of mine in Urumqi to see if they could go to the prison to check on him, take him money, and the like. They said that they didn’t want me to ask for help though, after which I didn’t seek them out again. But as for how long he’s been in prison, how long he was in a camp, I haven’t been able to get any news at all about this. His health was always really good before, but I don’t know what it’s like now. I have absolutely no news. We had a number for the company and tried to call that, but it didn’t go through.

‘Very difficult for me’

Fatime: I miss my dad with all of my heart, but I can’t see him.

RFA: When was the last time you spoke with your father on the phone?

Fatime: I don’t remember. He left while I was sleeping one night, crying as he said goodbye. But I woke up the next morning and at first, I wasn’t scared because I thought he was going to come [to Turkey] again. But later I got really sad. Now, everything is in lockdown and there’s [the coronavirus], and I’m about to give up hope. His telephone is cut off and everything is erased from it, there’s nothing on it anymore. We can’t even talk to our family when we want to, because they’ve been rounded up now. It’s very difficult for me to be without my father.

RFA: Do you remember your father’s face?

Fatime: I can remember his face, but I can’t remember his voice, because he’s not here with me … We don’t know what is fated for us. He was one of my most favorite people I had around me, my friend, my dad, my parent. He kept me close.