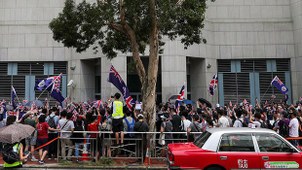 The UK rolls out its residency scheme for holders of British National Overseas (BNO) passports.

Pham Thanh, a dissident blogger charged with spreading 'information against the state,' has been moved from his detention camp to a mental hospital, his wife says.

The authorities are constantly expanding restrictions on what Chinese citizens can do, see or say on line, experts say.

Police in Shenzhen say they have finished their investigation, paving the way for a trial.

Zhang Wuzhou stood trial this week by video-link on charges of "picking quarrels and stirring up trouble.'

The next treason and incitement hearings in controversial case are set for January and March.

Rakhine state is ready to vote after weeks of quiet in ethnic war, say authorities.

Rhona Smith suggests such legal actions constitute a serious violation of due process.

Residents of temporary relocation centers say they have not been paid living allowances for the past five months.

Hoang Duc Binh, now serving a 14-year prison term for his role in environmental protests in 2016, says he was convicted unjustly and is not a criminal.

The protesters are calling on Beijing to reverse its phasing out of Mongolian-medium teaching in the region's schools.