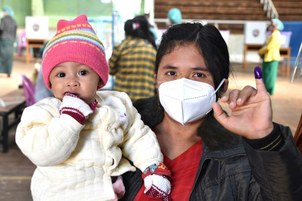 Officials of Aung San Suu Kyi's ruling National League for Democracy have claimed victory in Myanmar parliamentary elections on Nov. 8, which saw millions of voters brave long lines under tight coronavirus restrictions to turn out for the country's second democratic election since the end of military rule. Votes were still being counted and no official projection has been released.

Residents of central Vietnam are surveying the damage and cleaning up debris after Typhoon Molave smashed coastal regions Wednesday, leaving at least 3 dead, and 26 missing. Quang Ngai and Quang Nam provinces suffered the brunt of the latest deadly storm in a month of extreme weather events that have claimed nearly 150 lives in the Southeast Asian country.

Vietnam Braces for Typhoon Molave After a Deadly Month of Storms

Fishermen moved boats to safer ground and villagers boarded up their homes across a wide swathe of coastal central Vietnam, as the Southeast Asian country prepared to evacuate nearly 1.3 million people ahead of Typhoon Molave. Molave, which is expected to make landfall on Wednesday, will be the fourth storm to hit Vietnam in a month that saw 130 people killed and left 20 others missing.

Myanmar, a multiethnic nation of 54 million people the size of France or Texas, holds nationwide elections on Nov. 8, with some 7,000 candidates from more than 90 parties, as well as independents, are vying for more than 1,100 seats available in both houses of the national parliament and in state and regional legislatures.

Tropical storms have caused flash floods throughout the neighboring nations, destroying crops and infrastructure, and impacting hundreds of thousands of households.

A Global Day of Action to Resist China’s Communist Party

The US-China Rupture Accelerates in 2020

A timeline of actions and reactions in the downward spiral of U.S.-China relations in 2020, as the world's two biggest economies spar over trade, the coronvirus pandemic, technology, the South China Sea and repressive Chinese policies in Xinjiang and Hong Kong.

Seventy years after North Korean founder Kim Il Sung (1912-94) launched the June 25, 1950 surprise attack on South Korea that sparked the Korean War, Kim’s grandchildren, Kim Jong Un and his younger sister Kim Yo Jong, are in charge in Pyongyang – and embroiled in conflict with Seoul and Washington over nuclear weapons and economic sanctions.

China Sweeps Up Prominent Business Figures In Crackdown On Uyghurs

Once prominent public figures have not been spared by the Chinese crackdown in the Xinjiang Uyghur Autonomous Region. There are at least 18 business figures whose detention or internment have been confirmed by RFA’s Uyghur Service.

Cambodian opposition leader Kem Sokha is on trial for treason, accused of conspiring with the United States and other foreign powers to topple the government of Prime Minister Hun Sen. Critics say the charge against Kem Sokha is politically motivated and evidence of Cambodia’s slide into authoritarian rule.

The trove of secret cables, known as the Xinjiang Papers, call for an “all-out ‘struggle against terrorism, infiltration and separatism.’”

Gambia has brought a case to the International Court of Justice accusing Myanmar of genocide during a military crackdown in August 2017 that forced more than 730,000 Rohingya to flee to neighboring Bangladesh. U.N. investigators have reported widespread rapes and killings. Myanmar says it was a counterterrorism operation and denies committing genocide.

Cambodia's courts have issued a series of rulings against opposition leader Sam Rainsy, with more on the way as he prepares to come home on Nov. 9, 2019.

In a battle of letters that unfolded at the UN Human Rights Council in Geneva this month, 22 countries formally condemned China's mass detention of some 1.5 million Muslims in determent camps. In response, China enlisted the support of fellow authoritarian countries. The resulting letter was signed by 37 states, and read: "We commend China’s remarkable achievements in the field of human rights.”

This week’s meeting in Pyongyang is the fifth between Chinese leader Xi Jinping and North Korean leader Kim Jong Un. It’s the first to take place in North Korea.

The tariffs hit a broad range of goods, from vegetables and livestock to textiles and natural gas.