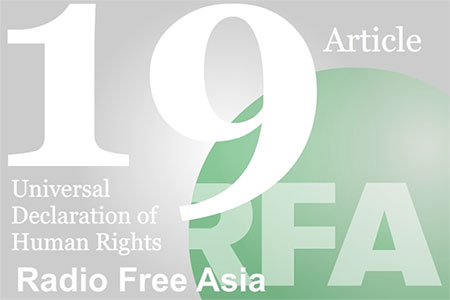 Radio Free Asia operates under a Congressional mandate to deliver uncensored, domestic news and information to China, Tibet, North Korea, Vietnam, Cambodia, Laos, and Burma, among other places in Asia with poor media environments and few, if any, free speech protections. All broadcasts are solely in local languages and dialects, which include Mandarin, Tibetan, Cantonese, Uyghur, Vietnamese, Lao, Khmer, Burmese, and Korean.

RFA adheres to the highest journalistic standards of objectivity, accuracy, and fairness, as defined in the code of ethics for its reporters and editors. In countries and regions with little or no access to accurate and timely journalism, as well as alternative opinions and perspectives, RFA’s nine language services fill a crucial gap. RFA aims to retain the greatest confidence among its audiences and to serve as a model on which others may shape their own emerging journalistic traditions.

RFA is a private, nonprofit corporation, funded by the U.S. Congress through the U.S. Agency for Global Media (USAGM), an independent federal government agency that oversees all U.S. civilian international media. In addition to providing oversight, the USAGM works with RFA to ensure the professional independence and integrity of its journalism.

"Everyone has the right to freedom of opinion and expression; this right includes freedom to hold opinions without interference and to seek, receive, and impart information and ideas through any media and regardless of frontiers." — Article 19, The Universal Declaration of Human Rights