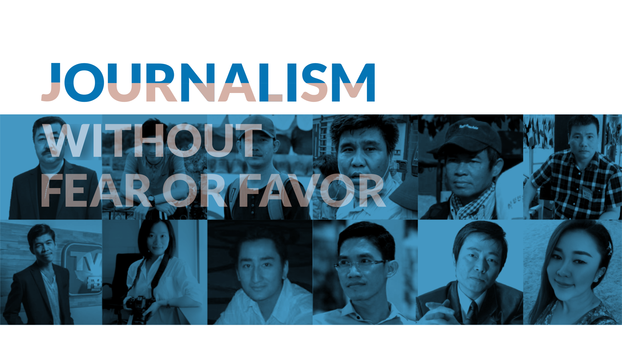 WASHINGTON -- Marking World Press Freedom Day, Radio Free Asia (RFA) President Bay Fang reiterated the call to release RFA contributors, former journalists, and family members targeted by authorities in connection with RFA’s journalism. The cause of press freedom has taken on a greater urgency as the world fights back against the COVID-19 pandemic, she stated.

“RFA has witnessed governments resorting to the most brutal of methods in cracking down on free press, whether it’s jailing RFA contributors for critical coverage in Vietnam, detaining the relatives of RFA’s Uyghur journalists in China, or prosecuting former RFA reporters on politically motivated charges in Cambodia,” Fang said. “The continued erosion of press freedom in RFA’s broadcast countries, as audiences seek answers, only reinforces the need for independent journalism.

“As the world battles a deadly pandemic, journalism and journalists -- and all of those involved in the news-gathering enterprise -- are more essential than ever.”

Radio Free Asia (RFA), along with 73 other media outlets, and press freedom and safety groups, signed onto a letter led by the Committee to Protect Journalists (CPJ) urging Asian heads of state to release jailed journalists -- including RFA Vietnamese contributors Truong Duy Nhat and Nguyen Van Hoa. The letter, published Monday on CPJ’s website, invokes the threat that the coronavirus poses to imprisoned populations, and addresses, among other leaders, the heads of state of four RFA broadcast countries (China, Cambodia, Vietnam, and Myanmar). Two Cambodian journalists formerly with RFA's Khmer Service, Yeang Sothearin and Uon Chhin, continue to face politicized charges after a protracted two-and-a-half-year legal battle. At least six of RFA’s Uyghur journalists currently have relatives detained, missing, and jailed in connection with their work in exposing the human rights crisis in China’s Far West, where at least a million Uyghurs are being held in internment camps.

RFA's target countries are among the world’s most repressive media environments, according to Reporters Without Borders’ (RSF) recent 2020 World Press Freedom Index. Seven out of RFA’s nine language services broadcast into countries that are ranked among the survey’s bottom 10 places. Freedom House, which assesses countries based on political rights and civil liberties afforded to citizens, classifies all of RFA’s broadcast countries as “not free.”

“Journalism stands in the way of the CCP and authoritarian rulers in other countries deceiving their publics over their handling of COVID-19,” Fang said earlier in a commentary piece. “Our mission -- despite threats, intimidation, and censorship -- must never cease, as long as there is truth and the public good to be defended.”