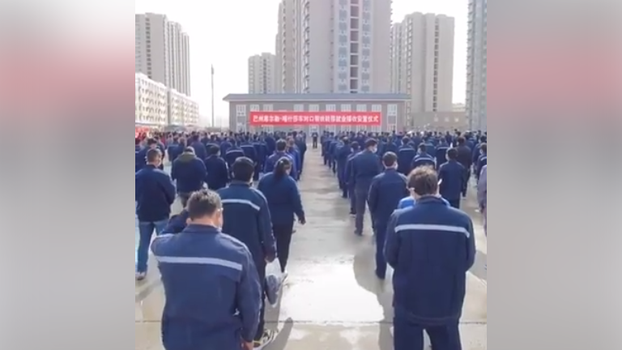 RFA’s Uyghur Service recently received information that the former detainees in Korla (in Chinese, Kuerle)—a county-level city in Bayin’gholin Mongol (in Chinese, Bayinguoleng Menggu) Autonomous Prefecture and the XUAR’s scond-largest city—are serving the deferred sentences at home, but are subject to harsh restrictions.

Those serving deferred sentences reportedly live under constant and heavy monitoring and surveillance, and have to report regularly to the police. The sources, who declined to be named, citing fear of reprisal, told RFA they have trouble finding work and financially supporting themselves and their families.

The claims follow multiple tips in recent years that the number of detainees in four known Korla internment camps had grown so excessively large that jails and prisons had been repurposed to house the overflow. Authorities in the XUAR are believed to have held up to 1.8 million Uyghurs and other Muslim minorities in a vast network of internment camps since April 2017.

RFA spoke with a Uyghur employee of the Korla Judicial Department who, when asked about how local authorities were dealing with overflow, referred questions to “the people in charge of these matters.”

“You’ve got the wrong number,” she said.

However, RFA also spoke with a Uyghur police officer who confirmed that more than two dozen Uyghurs under her jurisdiction in Korla’s Yengisheher district alone are serving deferred sentences outside of prison.

“Twenty-five of them are serving terms, but they’re serving them outside prison rather than in it,” she said, speaking on condition of anonymity.

“If they make any sort of mistake it’s dealt with according to the law.”

The officer said that the 25 people had been handed three-year jail terms to be served “in five years,” although it was not immediately clear whether the sentences were to be served over the course of five years or begin in five years’ time.

When asked whether they had been given deferred sentences because there was no space for them in prison, the officer initially said “yes,” but added that “to be truthful, I’m not clear on the situation.”

The officer also said she was unable to answer questions about how many people are being held in Korla’s internment camps or how many prisons there are in the area, although she did confirm the existence of at least one camp in the city’s development zone.

RFA spoke with two Uyghur experts on the XUAR’s legal system currently living in exile—a former lawyer who now resides in Norway named Bahtiyar Omer and a former police officer who has relocated to Sweden who gave his name as Yolwas—about the practice of deferred sentences.

According to Omer, deferrals are normally given to people who have been handed the death sentence to delay their execution by a year or two.

He said that the Korla sentences had likely been deferred owing to two possibilities.

“The likelier possibility is that there is no space left in the prisons, because prisons have been very crowded since the uprising on July 5, 2009,” he said, referring to a three-day rampage of violence in the XUAR capital Urumqi between Uyghurs and Han Chinese that left some 200 people dead and 1,700 injured, according to China’s official figures. Uyghur rights groups say the numbers are much higher.

“It’s very possible that they’ve given these deferred three-year sentences to be served out over five years because there’s simply no space left in prisons,” Omer said.

“Another possibility is that they want to break the spirit of the people, their psychology, and that this is one of their cruel methods. That’s a big possibility.”

“One possibility is that because the jails and prisons have filled up with people serving their sentences, they have no way to deal with all the people and so are using deferred sentences,” he said.

He said a more likely scenario is that “these people have basically committed no crime” but authorities don’t want to allow them to live free.

“Given the current political situation, there’s no way they could just let them go [from the internment camps], so it’s possible that they perhaps charged them with these crimes as a way of simply controlling them,” he said.

Korla city has a total population of around 550,000, some 30 percent of whom are Uyghur, while the population of each of the townships, villages, and districts in the city numbers around 50,000 people.

Based on these statistics and that 25 prisoners are serving deferred sentences in Yengisheher district, Omer and Yolwas both estimated that the Uyghur population of Yengisheher is between 10,000 and 15,000, and that between 2,000 and 3,000 of them are possibly being held in some form of detention.

However, growing evidence suggests some Uyghurs and other detainees are being relocated to factories inside and outside of the XUAR as forced labor, under the guise of gaining employment connected to their purported vocational training.

RFA’s Uyghur Service recently obtained a copy of a document which was circulated by the government of Bayin’gholin on July 13, stating that it plans to put 19,000 people in construction jobs over the next three years. A Han Chinese staffer from the job center listed on the document said that most of the people would comprise camp detainees.

It was not immediately clear whether the detainees to be placed in jobs under the Bayin’gholin program will be moved into forced labor settings or into “residential areas” like one RFA reported on earlier this month in the seat of Makit (Maigaiti) county, in the XUAR’s Kashgar (Kashi) prefecture.

In that report, sources told RFA that a special, restricted-access residential area had been established to relocate internment camp detainees accused of lighter “offenses,” which requires study of Mandarin Chinese, while employing detainees in several on-site factories.

Residents are strictly monitored and made to attend mandatory political indoctrination classes, sources said, as well as sessions involving “self-examinations” and “confessions,” while entry and exit are prohibited without special permission.

The relocation of Uyghurs and other Muslim minorities out of the camp system into other forms of arbitrary detention appears to have sped up in recent months.

In March, RFA learned that all internment camp detainees in Bayin’gholin’s Chakilik (Ruoqiang) county had been sent to prisons or to parts of China’s interior.

Images circulating on social media platforms purportedly show that Uyghurs and other Muslim minorities are being transferred between various forms of detention, incarceration, and possibly forced labor schemes both inside and outside of the XUAR.

One widely shared image appears to show rows of people dressed in similar blue jumpsuits, wearing masks, and holding bags of personal belongings as they stand in a public square, reportedly in Korla.

Experts and members of the Uyghur activist community in exile believe images such as these show detainees who have been transferred from a camp to either prisons or factories, where they are required to perform forced labor.