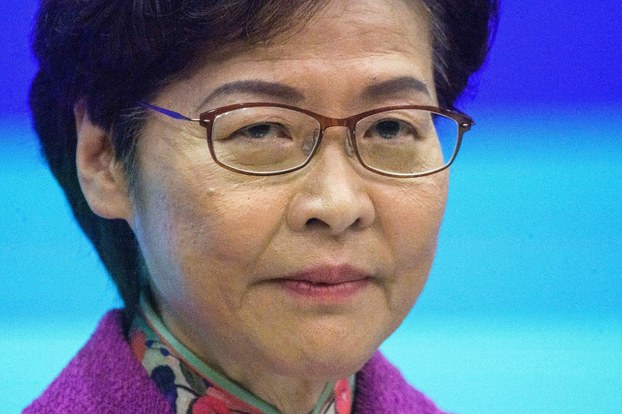 Hong Kong leader Carrie Lam set out an array of policies on Wednesday targeting the city's youth, including sweeping changes to the teaching of a critical thinking program in high schools, which has been blamed by the ruling Chinese Communist Party (CCP) for fueling waves of youth-led political movements in recent years.

In her policy address to a Legislative Council (LegCo) from which all pro-democracy members  resigned last month in protest at the expulsion of four of their colleagues, Lam said that some 40 percent of the 10,000 people arrested in connection with last year's mass protest movement were students, out of which some 2,000 were in primary or secondary education at the time of their arrest.

Echoing CCP officials, Lam blamed the "infiltration of politics into school campuses" for the appearance of young people in pro-democracy protests in recent years.

"The law-abiding awareness of some young people is weak," she said, adding that reforms to the Liberal Studies critical thinking program would be brought in to "[rectify] the previous deviation from the subject’s objective."

Lam said the government would reform teacher training to ensure that teachers were complying with government guidelines in the classroom, where any discussion of politics has been effectively banned.

Teachers who failed to comply with government directives would be struck off, she warned.

Lam also unveiled plans for her government to subsidized a youth employment scheme for 2,000 young Hongkongers who would be placed in jobs in mainland China.

"Many enterprises [in the Pearl River Delta area have] indicated that with subsidy from the [Hong Kong] government, they could offer job opportunities to young people of Hong Kong," she said.

In 2012, the Hong Kong government temporarily shelved plans to introduce a CCP-backed program of "patriotic education" into the city's schools, after a mass protest led by then-highschooler Joshua Wong and his campaign group Scholarism.

Thousands of young protesters camped outside government headquarters for several weeks, dressed in black and chanting for the withdrawal from the curriculum of what they called "brainwashing" propaganda from the Communist Party.

Wong, who is now in jail pending trial for organizing an "illegal assembly" outside police headquarters during last year's protest movement, went on to become a key figure in the 2014 Occupy Central campaign for fully democratic elections.

Lam told reporters on Wednesday that universal suffrage was off the table, until "constitutional order" was restored.

"I think we all know who to blame if we can't do this," Lam said. "We put forward a very open, universal suffrage proposal in 2014. But Occupy Central and struggles in LegCo ended it," she said, in an apparent reference to opposition filibustering and mass protests that shut down LegCo and prevented her from passing laws enabling extradition to mainland China in June 2019.

The Occupy Central movement began with a student strike in September 2014, in response to Beijing's plan to allow one vote per person, but only for a slate of candidates approved by the CCP.

Lam also reminded Hongkongers that she is a "core leader" of the city, with powers spanning not just the administration, but also the legislature and judiciary.

"The chief executive enjoys sweeping powers, not just over the administration, but also over legislative and judicial institutions," Lam said.

"[The Hong Kong government] is an executive-led system with the chief executive at the core, who is directly accountable to the Central People's Government," she said. Lam has previously said that there is no separation of powers in Hong Kong.

She said her role would pose no threat to judicial independence, because upholding such independence was also part of her remit.

Civic Party Chairman and barrister Alan Leong said there was no such wording in the city's mini-constitution, the Basic Law.

"Does that mean she can override [the Chief Justice of the Court of Final Appeal] Geoffrey Ma and [the President of the Legislative Council] Andrew Leung?" Leong told RFA. "The Basic Law is very clear, with three chapters for the executive, the legislature, and the judiciary, that there is no subordination of one to the other."

"I guess her saying this means that there is an overriding implication that the Legislative Council and the judiciary are subordinate to her, because she is the head of the whole Hong Kong," he said.

Leong said Lam's address -- which she has said was postponed to allow more face-to-face discussion with CCP leaders -- was likely written by the Chinese Communist Party as a political manifesto, and as a public report on the progress of "stability maintenance" in Hong Kong.

Lam said vice premier Han Zheng had told her that Beijing would "fully support any measures conducive to maintaining the long-term prosperity and stability of Hong Kong, improving the well-being of Hong Kong people, and promoting greater integration of Hong Kong into [the Chinese economy]."

"One of our urgent priorities is to restore Hong Kong’s constitutional order and political system from chaos," Lam said. "There are still divergent views on the basic issues pertaining to the political system, [while] some people’s awareness of the “One Country” principle has yet to be enhanced."

She blamed "ill-intentioned people influenced by external forces" for deliberately misleading the public about Hong Kong's status in the eyes of Beijing.

In addition to the youth employment scheme, Lam's speech also committed Hong Kong to faster economic integration with cities in the Pearl River Delta, known as the Greater Bay Area.

Hong Kong economist Law Ka-chung said the economic integration measures were clearly a bid by the CCP to de-emphasize Hong Kong's previous role as a world city, and bind it more closely to the rest of southern China.

"This comes entirely from the CCP's point of view," Law told RFA after the policy address. "It didn't read as a policy address for Hong Kong."

"They want to bring Hong Kong back into the fold [of the domestic economy]," he said. "What else can they do? Hong Kong's role as an international city has been marred by sanctions [over the national security law]. They are surrounded."

"That's why they keep harping on about the Greater Bay Area, because people are already saying that you are part of the same country now, rather than an international city," he said.

CCP general secretary Xi Jinping last month ordered changes to the course of Chinese economic policy for the first time in four decades, moving China to a "circular economy" under state control, and away from the export-based model that has fueled its rapid growth since 1979, when late supreme leader Deng Xiaoping ushered in four decades of market-based economic reform.

On June 30, Beijing imposed a draconian national security law on Hong Kong which threatens anyone criticizing the Chinese or Hong Kong authorities anywhere in the world with possible life imprisonment.

The law will also affect the right to education and freedom of information, opinion, and expression in schools, as political statements and discussions are banned from the city's classrooms, and as books by pro-democracy figures are removed from its public libraries, HRW said.

China's feared state security police have also set up a headquarters in the city to oversee the law's implementation and to deal with "serious cases," while the government has warned that slogans linked to last year's protest movement, including "Free Hong Kong, Revolution Now!", will fall within the law's remit.

Under the terms of the 1997 handover agreement, Hong Kong was promised the maintenance of its traditional freedoms of speech and association, as well as universal suffrage.

But Beijing's ruling out of fully democratic elections in 2014, its insistence on the prosecution and disqualification of key opposition figures, and its subsequent imposition of the National Security Law following months of popular protests over diminishing freedoms have collapsed the distinction between the city and the rest of mainland China, rights groups and overseas governments say.

The law prompted many nations including Britain, Canada, Australia, Germany, Finland, France, and New Zealand to end their extradition arrangements with Hong Kong.