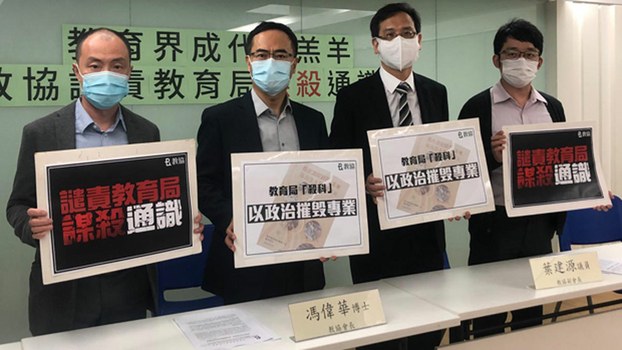 Authorities in the southern Chinese province of Guangdong say they have handed over the cases of 12 Hong Kong protesters detained as they fled to the democratic island of Taiwan to the state prosecutor, paving the way for a trial.

"The Yantian branch of the Shenzhen municipal police department has completed its investigation into the 12 suspects ... for illegally crossing a border, and for organizing others to illegal cross a border," the police department said in an official statement dated Nov. 27.

"Their cases have now been transferred to the Yantian District People's Procuratorate for indictment, according to law," the statement said.

The move comes after the Shenzhen authorities issued a ban on lawyers appointed by the families of the 12 activists detained by the China Coast Guard on Aug. 23, and repeatedly prevented them from meeting with defense attorneys appointed by their families.

Five law firms said they had received verbal orders from the Yantian district bureau of judicial affairs to stop acting for the families of the 12 detainees, with officials saying that the orders came from the ministry of justice in Beijing.

The detainees are aged 16 to 33 and were trying to flee to Taiwan by speedboat after being charged with crimes linked to months of mass popular protest that rocked Hong Kong last year.

Any lawyer hired to act on behalf of the 12 activists has been ordered to stop doing so, often by repeated phone calls from judicial bureau officials to their personal number, according to multiple sources.

Lawyers denied access
The orders came after 10 lawyers made repeated attempts to meet with their clients, but were denied entry by detention center staff.

Two of the 12 detainees, Quinn Moon and Tang Kai-yin, were formally arrested on suspicion of organizing an illegal border crossing, which carries a maximum penalty of seven years' imprisonment.

The other 10 were formally arrested and charged with illegally crossing a border, which carries a maximum jail term of one year.

But the move doesn't necessarily mean that the 12 will soon face trial, the Apple Daily newspaper reported on Friday, citing a Chinese lawyer as saying that prosecutors could send the case back to police if there is insufficient evidence.

The announcement on the 12 Hong Kong detainees came as the city's government -- which has declined to press the ruling Chinese Communist Party (CCP) for their release on the grounds that they are fugitives -- detailed plans to scrap the teaching of Liberal Studies, a high-school critical thinking program blamed by China for a successive waves of youth-led pro-democracy protests in recent years.

The program had previously taught, and required students to study, discuss and analyze, topics deemed anathema by the CCP, including events written out of mainland Chinese history textbooks, including the 1989 Tiananmen massacre.

The subject will undergo a name change, include study trips to mainland China, and have new content on "national security" introduced, education secretary Kevin Yeung said.

The imposition by Beijing of a draconian national security law on Hong Kong from July 1 has sparked a city-wide crackdown on all forms of peaceful dissent.

'Correct values'
Yeung told journalists on Thursday that the program would now be repurposed to train high-schoolers in Hong Kong in the "correct values."

"[Students] will be looking at the world from the perspective of China and Hong Kong," Yeung said, while "over-reliance on newspapers and excessive discussions on current affairs" would be avoided.

Fung Wai-wah, president of the Hong Kong Professional Teachers' Union (HKPTU), said the aim of the move was political control and suppression of the education sector.

He took issue with claims by Yeung and chief executive Carrie Lam that the public no longer trusted Liberal Studies.

"People were asking [Lam] what she meant by that but she was unable to explain," Fung said. "This is the first we've heard of it."

"There has never been any mention among professionals in the education sector of any loss of trust, nor anyone saying it had become a devalued version of what was originally intended," he said.

"The education bureau managed to destroy all of that hard work in just 10 minutes," he said.