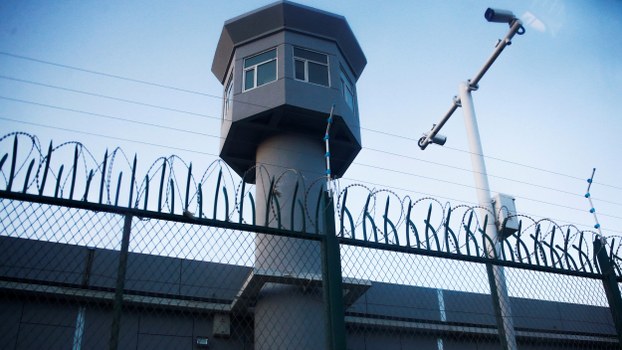 A guard watchtower rises along a perimeter fence of what is officially known as a 'vocational center' in Urumqi's Dabancheng district, in the Xinjiang Uyghur Autonomous Region, Sept. 4, 2018.

At least three people have died and three are seriously ill from among 17 people taken to internment camps from a single street in northwest China’s Xinjiang Uyghur Autonomous Region (XUAR), according to police officers in the region’s Aksu (in Chinese, Akesu) prefecture.

Jambizim street, a kilometer-long stretch in a village in Uchturpan (Wushi) county’s Imamlirim township, is home to some 180 people.

RFA’s Uyghur Service recently received a tip from a listener with knowledge of the area who said that at least 17 residents of the street had been detained in one of a vast network of internment camps where authorities in the XUAR have held up to 1.8 million Uyghurs and other Muslim minorities since early 2017.

According to the listener, who spoke on condition of anonymity in fear of reprisal, three of the 17 taken into extrajudicial detention from Jambizim street over the past few years have died, while three others have returned home with serious physical or other health problems.

RFA recently spoke with the chief of the Imamlirim township police station who said he was unable to discuss the situation due to the sensitivity of the topic.

“How about you call the PSB (Public Security Bureau) and ask about the situation,” the chief said. “We can’t talk to you about this. Sorry.”

However, RFA was able to contact a village police officer in Imamlirim who provided the names of a number of the 17 individuals from Jambizim street, which he said was under the jurisdiction of the No. 4 group of Imamlirim’s No. 12 village, and confirmed the status of several of them.

“The people who died in reeducation are Salam [Abdusalam] Niyaz … Turdi Osman ... and Mamat Niyaz,” the officer said.

Abdusalam Niyaz, 50, and Mamat Niyaz, 55, were brothers, the officer said, adding that he was unsure of the cause of their death, or that of Turdi Osman, believed to be in his forties. All three were apparently in good health prior to their detention.

The officer said the three men—all of whom were farmers and the heads of households up five to six people—had been held in a camp called Kuangtai, which is the largest in Uchturpan and can hold more than 10,000 individuals. 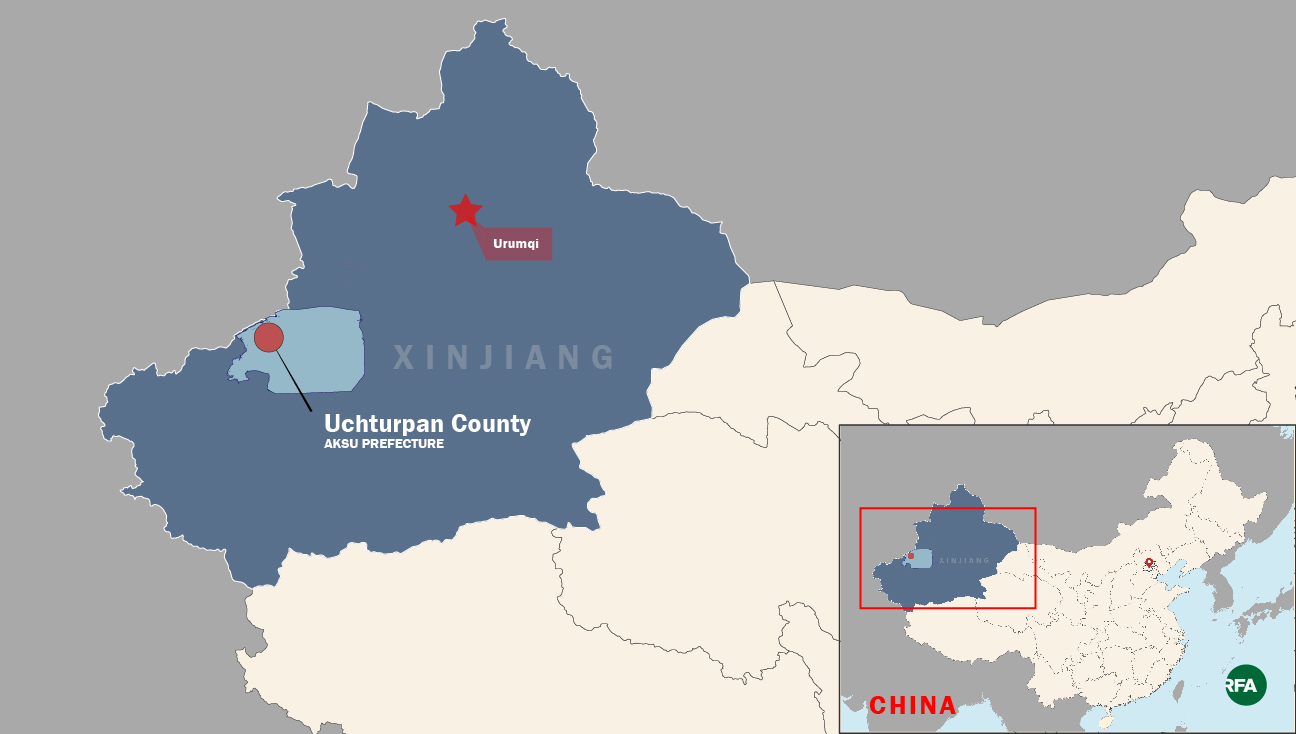 According to the officer, three more individuals from Jambizim street were released from camps with serious health problems: Anwar Tawakkul, 23, Omar Hudiyam, 30, and Ablet Bawudun, 30. RFA learned last month that Bawudun, a Uyghur former high school volleyball star, was released in late 2019 after developing renal issues and swelling, and now walks on crutches.

“[Bawudun] is at home—every month he has to go to the hospital,” the officer said. “He has kidney problems and has to get that worked on.”

Bawudun has yet to complete his full term of internment—the length of which was never made clear to him from the start—and he is still currently released under “guarantee” and close watch by local authorities.

“Omer Hudiyam also was in [a camp],” the officer said, adding that he had developed problems with his feet.

“He was treated for six months and is now at home. He doesn’t go out, just stays in bed at home.”

All three were healthy before being sent to camps, though the specific cause of their health problems remains unclear.

Imprisoned and forced to work

Additionally, the officer told RFA, another five of the 17 from Jambizim street—including Ablat Ablikim, Salam Barat, and Keram Rahman—have been sentenced to prison terms, while two women named Arzugul Samat and Hanzohra Saydahmat have been sent to a factory in Aksu to work as part of a forced labor program. RFA was unable to account for the whereabouts of the final four.

According to the police officer, the No. 4 group of No. 12 village, where Jambizim Street is located, has had a relatively small number of its residents detained in comparison to some other groups and villages in Uchturpan. Of the approximately 3,000 residents in the No. 12 village, around 2,000 have been sentenced to prison.

Chinese Foreign Minister Wang Yi claimed in September that all those sent to the camps have been released and placed in employment, but RFA recently spoke with police officers from Uchturpan who directly contradicted the claims. The officials not only confirmed that at least three camps are still in operation in the county but also estimated that together they are likely to hold more than 20,000 detainees.

Uchturpan is a county consisting of six townships and three “bazaars,” or market centers, and has an official population of around 235,000—more than 90 percent of which is ethnic Uyghur. If the estimates are correct, the number of detainees in the three camps would account for nearly 10 percent of the county’s Uyghur residents.