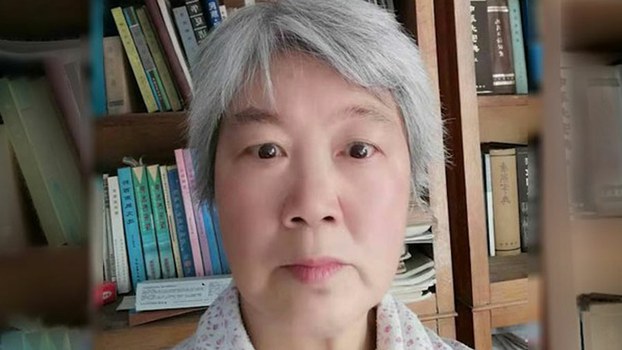 Huang Chun, a retired professor at the Guizhou Nationalities University, who was sentenced to a 15-day administrative sentence after she retweeted photos of anti-government protests on social media, in undated photo.

Authorities in the southwestern Chinese province of Guizhou jailed a retired university professor for 15 days after she retweeted photos of the Hong Kong protest movement, forcing her to strip in front of officers during her time in detention, RFA has learned.

Huang Chun, a retired professor at the Guizhou Nationalities University, was detained by her local police force and sentenced to a 15-day administrative sentence for "disrupting public order" after she retweeted photos of anti-government protests and the June 4, 1989 pro-democracy movement on social media.

Huang, 65, said she served the administrative sentence, which can be handed down by a police committee without trial, at a People's Armed Police military facility, instead of in a police-run detention center.

"I am still in a state of shock about this," Huang told RFA on Friday.

"I had been under covert surveillance by [state security police], who had me under house arrest."

"On the 20th day of my house arrest, they kidnapped me as I was on my way to go swimming," she said. "They took me to Huaxi police bureau, and took all of my clothes off, even my panties, because they wanted me to wear the clothes they gave me."

Huang's detention came after she had given a number of interviews to overseas media organizations, and made a number of social media posts and retweets on topics deemed problematic by the ruling Chinese Communist Party.

She was placed under house arrest just ahead of the Oct. 1 celebrations of the 70th anniversary of the founding of the People's Republic of China, and her former students were prevented from visiting her at home, she said.

Huang said she was also subjected to forcible tests on her blood and urine, and forced to wear manacles and leg irons during her detention.

During her interrogation by state security police deputy brigade leader He Fanfan, she was asked why she retweeted photos of police massing near the border with Hong Kong, around Shenzhen city and its port of Putian.

"I was pretty mad at them for making me wearing manacles and leg irons, and my blood pressure was very high," she said. "After my sentence they kept me in custody at a hospital for medical checkups, where they forcibly pinned me down and took blood samples."

"I kept yelling: the Huaxi police bureau is committing murder!"

Huang said she was held in an armed police facility close to Yun'an Detention Center.

"There were a lot of armed police coming and going; I heard that there were around 10,000 of them stationed there," she said. "There was a high perimeter wall with chainlink fencing and electric fencing."

"They shut me up in a cell in a place called an isolation area, a bit apart from the other detainees," she said. "They put another couple of detainees in there to keep me company."

"It was turnip and cabbage three times a day, with two steamed buns each per meal but they were so white, those buns, that I didn't dare to eat them," Huang said.

Huang said police had refused to give her an official release certificate.

"Back in 2015, I was given a release certificate when my detention ended, but they didn't give me one in this place," she said. "They told me to get it from the detention center, which just shows that this wasn't a legitimate place of detention."

Ethnic Chinese who have reported being incarcerated in mass detention camps alongside Uyghurs and other Muslims in China's Xinjiang Uyghur Autonomous Region (XUAR), have warned that the system could soon spread elsewhere, as President Xi Jinping seeks to ensure total control over public expression by the ruling Chinese Communist Party.

One escapee from Xinjiang has told RFA that Han Chinese who care about the situation in Xinjiang daren't speak out in case their entire family is sent to a concentration camp, suggesting that they are also used as tools for ideological control over non-Muslims too.