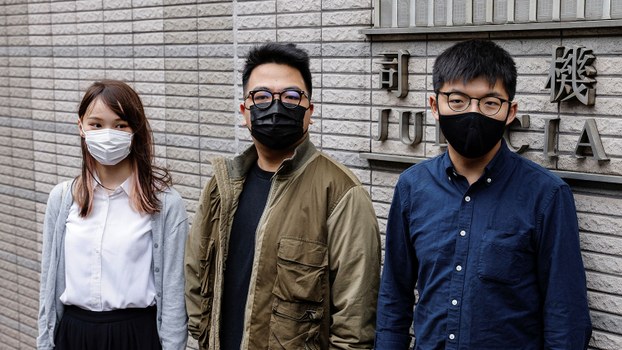 "Hang in there, everyone, keep going!" Wong told the court, before being taken away by correctional service officers.

Lam raised his hand, palm and fingers splayed to signify the five demands of last year's protest movement, while Chow made no response to the decision to hold the three in custody pending sentencing.

Dozens of supporters chanted "Release Joshua Wong! Release Agnes Chow! Release Ivan Lam" outside the court building, as well as repeating the five demands of the protest movement, which include fully democratic elections and accountability for widespread police violence.

The three were formerly leaders of the political party Demosisto, which disbanded just before the ruling Chinese Communist Party imposed a draconian national security law on Hong Kong on July 1, banning peaceful criticism of the authorities.

Wong had earlier told reporters that he wouldn't be surprised if the three were placed behind bars following the hearing at West Kowloon Magistrate's Court.

He said 23 activists, journalist, and democratic politicians had been arrested as the crackdown on peaceful dissent gathered pace.

Many arrests and raids have come after their targets were denounced in the pro-China media or by Chinese officials.

Defense lawyers called on the court to take into account the youth of the defendants and the fact that Chow, who, unlike Wong and Lam has never served time in jail before, had no prior convictions.

Magistrate Lily Wong said she would rule out a community service sentence for Lam due to his previous convictions.

Expected to be jailed

Joshua Wong, who was out on bail before the hearing, had earlier told reporters the trio had decided to plead guilty to avoid interrogation and investigation.

"But it also means that the three of us could be remanded in custody immediately," he said, calling on Hongkongers to support each other.

"We will want to call on the people of Hong Kong at this difficult time of white terror and persecution under the national security law ... to support each other through this low point in the pro-democracy movement," he said.

Chow said she felt "uneasy" at the thought of going to jail for the first time.

"It's entirely likely that I may be in jail for the first time in my life, and I have a lot of anxiety about what the future will bring," she said.

"But never forget that there are brothers, sisters, and friends who have suffered far worse than us," she said, calling for greater public pressure on China over the 12 Hongkongers currently detained by Chinese police after trying to flee to democratic Taiwan by speedboat.

Lam said he had made mental preparation for being remanded in police custody pending sentencing.

"Our case ... shows that the legitimacy of the Hong Kong police force has been blown to smithereens," Lam said. "Was the siege of police headquarters a crime, or was it necessary to achieve justice and fight for democracy?"

"I believe that the people of Hong Kong know the answer to that already," he said. "We have no regrets, and we will keep up the struggle."

The case against Wong relied on public comments he made on June 21, 2019, ahead of a mass protest over police violence that resulted in the siege of police headquarters in Wanchai, as well as a message on his phone detailing the timing and arrangements for the protest.

On the day in question, crowds of mostly young people wearing black converged on immigration and tax headquarters in Wanchai, sparking temporary shutdowns of the offices, before gathering in their thousands outside police headquarters to call for the release of those already arrested, and to demand an apology for police violence against unarmed protesters the previous week.

Some activists barricaded a vehicle gate in the barbed-wire wall of the fortress-like compound, prevented police vans from getting in or out, and taped up CCTV cameras to avoid being identified. Others blocked nearby highways with makeshift walls, cones, and traffic barriers, taking over several major traffic routes.

Police in uniform lined up inside the glass atrium of their own headquarters, with officers watching warily as the crowd chanted "Release them! Release them!" and "Apologize! Apologize!" on the street outside, where someone had taped a large poster to the building that read "Struggle to the bitter end."

Wong joined the June 21 protest just three days after his release from an earlier jail sentence related to the 2014 Occupy Central pro-democracy movement.

“We condemn Magistrate Lily Wong’s decision today to jail Wong, Chow, and Lam while awaiting sentencing for exercising their rights to protest," the group's managing director Samuel Chu said in a statement.

"Make no mistake, when they pled guilty in court today, it was not a judgment on them, but rather a judgment against a poisoned Hong Kong judiciary system no longer independent or capable of rendering justice," Chu said.

Since the beginning of November, Hong Kong authorities have arrested a public radio show producer, pro-democracy lawmakers, a primary school teacher, owners of small businesses who have expressed support for the protest, [among others], the HKDC said, calling for the trio to be released immediately.

"We cannot remain silent or surrender to the terror," it said.

Reported by Lau Siu-fung and Lu Xi for RFA's Cantonese and Mandarin Services. Translated and edited by Luisetta Mudie.