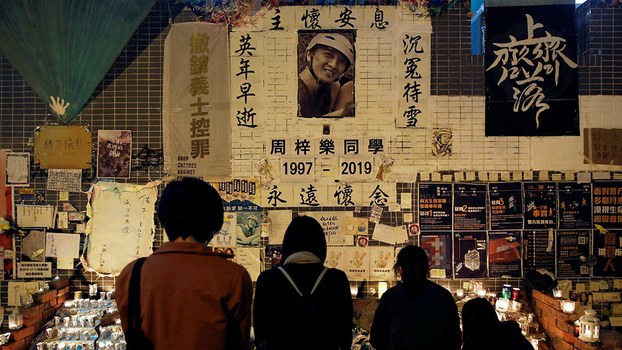 A memorial for Hong Kong student Chow Tsz-lok, who fell to his death in a car park in Hong Kong in November 2019, is shown in a January 2020 photo.
Reuters

The father of a Hong Kong University of Science and Technology student who died in a fall during a standoff between riot police and demonstrators during last year's protest movement has called on the public to come forward with any evidence relating to the night he sustained fatal injuries.

Hong Kong's Coroner's Court on Monday began an inquest into the death of Chow Tsz-Lok, who died of massive head injuries after falling from the upper floor of a parking garage in Tseung Kwan O on Nov. 4, 2019.

Chow was taken to hospital in a coma, and died four days later, further stoking public anger, as livestreamed footage showed police apparently refusing to allow an ambulance through a cordon to treat him.

His father Chow Tak-ming appealed on Monday for people to come forward with any information that could help the court reach a verdict on his son's death.

"It's more than a year since Tsz-lok passed away, and we ... are utterly heartbroken," he said. "But all we can do is to accept this new reality."

"Now that the inquest has begun, I would like anyone who was in the neighborhood of Sheung Tak Tsuen parking garage or Kwong Ming Court to come forward if they have more information," he said.

"I want to do the little that I still can to ensure that [my son] rests more peacefully," he said. "I hope everyone will work together to arrive at the truth."

Chow told the court on Monday that his son, who was studying computer science, was last seen leaving the family home in a black T-shirt and wearing a backpack on the night of Nov. 3.

"I just hope [we] can find out the truth, or something closer to the truth," he told journalists on Monday.

Chow's father described him as a healthy young man who enjoyed swimming and basketball, who was relatively quiet at home, but who enjoyed the company of his friends.

He said Chow had been home all day on Nov. 3, then got ready to go out at around 11.00 p.m. that night, packing a backpack and taking a water bottle with him.

His father questioned his going out that late, before warning him to be careful, as riot police and protesters were in the vicinity of their apartment complex, and media reports had shown officers firing tear gas at protesters and beating them up.

"There was nothing unusual about his demeanor," he told the court.

In the early hours of Nov. 4, Chow Tak-ming sent his son a message via WhatsApp saying tear gas was being fired nearby, and received a reply telling him to shut the windows. This was the last message he received from his son.

He was awoken by a high-school classmate of Chow Tsz-lok's telling him that his son had been injured in the parking garage of Sheung Tak residential compound, where he had fallen from the third level to the second.

By the time he got to hospital, his son was undergoing brain surgery, and Chow Tak-ming was handed his bloodstained clothing.

Chow said his son had taken part in protests, but not in any illegal activity, and that no suicide notes were left behind. All of his son's electronic devices had been handed over to police, who hadn't been able to unlock his cell phone.

Yip Po-kei, a senior police inspector who led a team of riot officers into the car park on the night Chow fell, said the team of around 10 colleagues had entered the parking garage at around 11.10 p.m. after spotting a group of black-clad people along the railings on an upper story, but that most of the protesters had already fled the scene by the time they arrived.

One man was stopped and searched, before being allowed to go about his business, Yip said.

She said her team had left the parking garage at 11.20 p.m., and concluded their operation just after midnight.

Yip told the five-person jury that she had had no contact with Chow Tsz-lok during the operation.

The inquest will run through Dec. 18, and is likely to call around 60 witnesses, as well as using virtual reality simulations to examine the scene of Chow's fall.

The inquest comes as rights organizations in Hong Kong hit out at the government's cancelation of a legislative hearing that they were planning to attend to give testimony ahead of the city's submission to the United Nations Human Rights Council next March.

Law Yuk-kai of the group Human Rights Monitor said the meeting would have been the only opportunity for non-government input into the review of the city's human rights record, which has been tarnished by police violence during last year's protest movement, and by a draconian crackdown on dissent instigated by the ruling Chinese Communist Party (CCP) in the name of protecting "national security."

Law told government broadcaster RTHK that NGOs had been allowed a meaningful contribution to past U.N. reviews.

"In the past, Legco had been doing its job by requiring the Hong Kong government to send high-level representatives, officials to join this kind of panel meeting in which NGOs would be able to fully discuss and explain their position, and then pose questions and recommendations," he said, adding that Human Rights Monitor has dropped out of the process this year.

Secretary for Constitutional and Mainland Affairs Erick Tsang said on Monday officials have yet to decide how to respond to the UN's questions, RTHK reported.

Human Rights Monitor said on its Facebook page at the weekend that a tip-off line set up by Hong Kong's newly inaugurated national security police had received nearly 10,000 reports in its first week of operation, an average of around 1,400 reports a day.

The group said the hotline will have a "chilling effect, and create an atmosphere of hostility in the community."

Hong Kong's police force launched the tip-off line on Nov. 5 to encourage people to report each other for alleged violations of a draconian national security law imposed on the city by CCP from July 1.

The hotline accepts text information, photographs, audio, or video ... across multiple platforms, and callers aren't asked for their personal details.

Political commentators say the main aim of the hotline seems to be to sow widespread fear and division among Hong Kong's seven million residents.