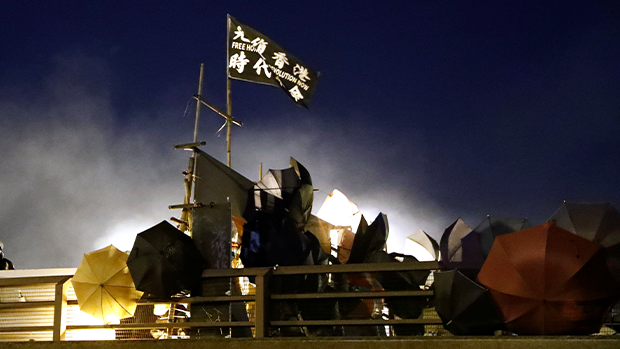 A former university student who fled Hong Kong after riot police surrounded their university campus in November 2019 has been granted political asylum in Germany, a rights group said on Monday.

The 22-year-old woman, a former student at the Chinese University of Hong Kong (CUHK), was granted refugee status for three years on Oct. 14 by the German immigration authorities, according to a Facebook post by Haven Assistance, a group helping Hongkongers in exile.

The group welcomed the decision, but said the woman had endured "great hardship" while the application was being processed, including being sexually assaulted in a refugee camp and subsequent hospitalization for psychiatric trauma.

But she called on the German government to simplify the application process, so more people fleeing protest-related arrest and conviction could seek refuge in the country.

"[For example], allowing them to choose freely their place of residence while waiting for the decision ... would be of great convenience and support to them," she said.

Haven Assistance added: "We also urge Germany and other European countries to continue to improve their asylum processes and consider enacting a comprehensive lifeboat policy for Hong Kongers."

"[This decision] demonstrates the German Government’s commitment to stand up for human rights and its recognition that under the National Security Law many Hong Kongers face political persecution, arbitrary arrest and detention if they stay in the city," Haven Assistance quoted Goodman as saying.

"However, the young woman’s experiences in the refugee camp shows that it is time for reform," he said.

He said that while Germany had pledged along with other EU members in July to make it easier for young Hongkongers to work and study in Europe as part of a rescue package, no concrete action had yet been taken.

"Nearly three months later, we believe it is time for the German Government to act on its promise," Goodman said, suggesting an expansion of an existing working holiday visa program and the extension of the Erasmus university exchange program to include Hong Kong applicants.

The decision by Germany follows the granting political asylum by U.S. immigration authorities to two siblings who fled Hong Kong after taking part in protests over the suspicious drowning death of Chan Yin-lam, a 15-year-old competitive swimmer, whose body was found floating in the sea at the height of the protest movement.

Police initially said the likely cause of death was suicide, but an inquest by a five-person jury into Chan's death unanimously ruled that out as a cause of death, returning an open verdict in September 2020.

The granting of asylum to Hong Kong protesters comes amid widespread recognition of a worsening human rights situation in the city following mass public protests over the creeping loss of the city's promised freedoms, commentators told RFA.

China has reacted angrily to the granting of asylum to high-profile political figures, and last week warned Canada that it should have a care for the "health and safety" of its nationals in Hong Kong, and not grant asylum to Hong Kong applicants.

In May 2019, Beijing hit out at Germany's decision to grant political asylum to two pro-independence activists, Ray Wong and Alan Li.

The pair had fled the city in 2017 while on bail pending charges of rioting during a 2016 street protest in support of street vendors, that came to be known as the "Fishball Revolution."

China has since imposed a draconian national security law on Hong Kong, criminalizing both words and deeds deemed supportive of independence for the city, with a maximum sentence of life imprisonment.

China should restrict the number of German cars that are allowed to be sold in China to retaliate against Germany's interference in Hong Kong.