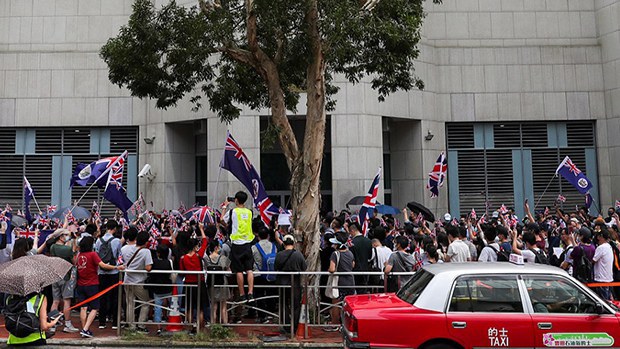 Hong Kong residents gather outside the British General Consulate in Hong Kong to call for the right of abode in the UK.
Reuters

The last opposition lawmakers left their offices in Hong Kong's Legislative Council (LegCo) on Monday after handing in their mass resignations earlier this month in protest over the disqualification of four colleagues, transforming the formerly lively chamber into a hushed auditorium, where only voices loyal to the ruling Chinese Communist Party (CCP) are still heard.

"When the resignations of all of LegCo’s pan-democrats take effect on Tuesday, it will leave the legislature without a legitimate opposition for the first time since the nascent days of the Hong Kong Special Administrative Region," government broadcaster RTHK reported on Monday.

Where pro-democracy parties once held the power to veto government bills, only pro-Beijing members remain in LegCo, ready to nod through legislation proposed by chief executive Carrie Lam with scant objection -- a change Lam has herself already lauded as "the return of peace."

Baggio Leung, who was stripped of his LegCo seat alongside five colleagues in 2016 after a decree from Beijing ruling their oaths of allegiance invalid, said the rot started to set in after the 2016 LegCo elections, when elected pro-democracy lawmakers were "disqualified," ending the opposition parties' power of veto over unpopular government policy.

"When the CCP in Beijing does a thing once, it is logical to expect it will then continue to do it in future," Leung told RFA. "The first disqualification was always going to lead to a second, and a third."

A Nov. 11 decision by the standing committee of China's National People's Congress (NPC) resulted in the expulsion of Dennis Kwok, Alvin Yeung, Kwok Ka-ki,and Kenneth Leung from LegCo, on grounds that they didn't meet the requirements laid down by the NPC.

The lawmakers' ouster prompted 15 pro-democracy lawmakers to hand in their resignations to the authorities in protest. Meanwhile, police arrested three former democratic lawmakers in connection with protest activities in the LegCo chamber earlier this year.

"Looking back, I'd said that LegCo was designed to be a birdcage," Leung said, in reference to the legislature's history of government-appointed members and lack of power to initiate legislation.

"When that's the case, even if you win control of it, it doesn't mean you can actually advance any reforms," he said.

'Won on the streets'

He said the opposition camp had put its faith in parliamentary opposition for too long already.

"The pan-democrats have been counting up votes for many years now, and yet it has never really been enough," he said. "Actually we should be relying on people power to oppose these things, [as we did with the CCP's] patriotic education program and the amendment [allowing extradition to mainland China]."

"Those battles were all won on the streets, not in LegCo," Leung said. "We can't changed draconian, evil, and outdated laws through LegCo."

He said the next pillar of Hong Kong's promised freedoms to fall would be the city's judiciary.

"Right now, I have no hope for the judiciary," Leung said, but said he had no wish to give up the struggle either.

"Those who have stayed in Hong Kong this far still don't want to admit defeat," he said.

Meanwhile, the British government hit out at China's imposition of a national security law on Hong Kong in the wake of mass protests that rocked the city last year, saying it had ushered in an era of "retribution against political opposition and silencing of dissent."

Foreign secretary Dominic Raab told parliament in a six-monthly report on Hong Kong that the law was in breach of the 1984 U.N.-registered treaty governing the handover of Hong Kong to the CCP, the Sino-British Joint Declaration.

"The National Security Law ... violates the high degree of autonomy of executive and legislative powers and independent judicial authority provided for ... in the Joint Declaration," Raab said in his introduction to the report.

"This new legislation allows the mainland Chinese authorities to take jurisdiction over certain cases without independent oversight and to try cases in mainland courts," Raab said. "Chinese security agents can now operate in Hong Kong without being held to account under Hong Kong law."

He said the "chilling effects" of the law are already visible in the city.

"It is already reducing the extent to which the people of Hong Kong are able to exercise their fundamental rights and freedoms," he wrote. "It has damaged freedom of expression in academia, schools, and libraries, including through the removal of textbooks and other books containing certain political content."

He said a new path to U.K. residency would be rolled out for Hongkongers eligible for the British National Overseas (BNO) passport on Jan. 31, 2021, while the U.K. would review whether it would allow British judges to sit as non-permanent judges on the Hong Kong Court of Final Appeal.

Recent media reports have indicated a sharp increase in the number of BNO passport holders in recent months, who are expected to reach 730,000 by the end of the year, more than double the number at the start of the the year.

Chan, whose tourist visa expires on Dec. 5, is currently trying to crowdfund money to make an application to remain in the U.K. legally, pending the new route to U.K. residency.

"I hope that the United Kingdom will at least open a channel for those who have a BNO passport to apply for one even if they have insufficient funds," he said.

Reported by Lau Siu Fung and Chan Chun Ho for RFA's Cantonese Service, and by Sun Cheng for the Mandarin Service. Translated and edited by Luisetta Mudie.