US Lawmakers Call For Stronger Action Against Cambodia’s Hun Sen 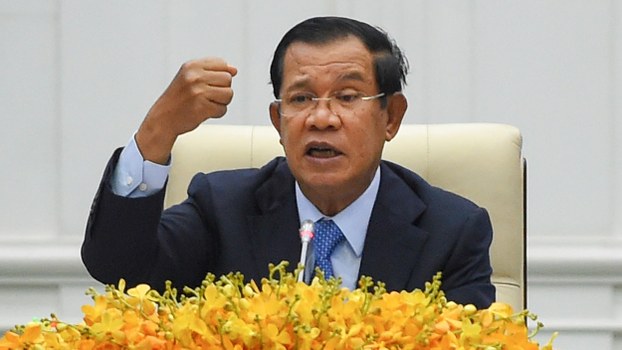 Cambodia's Prime Minister Hun Sen speaks to the media during a press conference at the Peace Palace in Phnom Penh, Feb. 24, 2020.

U.S. lawmakers have called on Secretary of State Mike Pompeo for tougher U.S. action against Cambodian Prime Minister Hun Sen, urging stronger diplomatic engagement and the imposition of targeted sanctions against senior leaders of the country’s ruling party responsible for repression of the opposition party.

Hun Sen, in power in Cambodia for over 35 years, “has a long record of using violence, intimidation, censorship, and corruption to maintain his rule,” said the Senators in a letter to Pompeo, signed by Senators Edward Markey, Elizabeth Warren, Dianne Feinstein, and Ted Yoho, and by Representatives Lori Trahan, Robert Casey, Jr., Alan Lowenthal, and Seth Moulton.

“He has engineered several ‘elections,’ none of them free and fair, in which his ruling Cambodian People’s Party (CPP) has always emerged the victor. The CPP controls the entire security apparatus of the country as well as its judiciary. Corruption is rampant,” the U.S. lawmakers wrote.

Dozens of critics of Hun Sen’s rule have been targeted for arrest in recent months, the letter says, citing estimates by Human Rights Watch that 55 political prisoners are being detained “for exercising their rights to freedom of expression, peaceful assembly, and association.”

Political opposition figures, environmental and youth activists, and journalists are among those being held, the lawmakers said.

The recent wave of arrests comes three years after Kem Sokha, president of the opposition Cambodia National Rescue Party (CNRP), was arrested in September 2017 over an alleged plot to overthrow the government with U.S. help. Cambodia’s Supreme Court banned his party in November that year for its supposed role in the scheme.

The move to dissolve the CNRP marked the beginning of a wider crackdown by Hun Sen on the political opposition, NGOs, and the independent media that paved the way for the ruling CPP to win all 125 seats in the country’s July 2018 general election.

Working with its allies, the United States must send “a strong message to Hun Sen that his crackdown on opposition and freedom of speech is unacceptable,” the letter’s signers told Pompeo, adding that calls for political reform in Cambodia should be made “in both your private and public communications with the Cambodian government without delay.”

“Moreover, we call on you, working with the Department of the Treasury, to impose targeted sanctions under the Global Magnitsky Act or other appropriate measures against the senior leadership of the CPP,” they said.

“It is now clear that only strong pressure is likely to change the behavior of the Cambodian government. We urge you to act because Hun Sen and his ruling CPP are no longer responding to diplomatic engagement.”

Speaking to RFA on Tuesday, Cambodian political analysts, rights activists, and labor leaders welcomed the lawmakers’ letter, calling it a “wake-up call” and warning that Cambodia, already hit with a loss of trade preferences by the European Union, may now face further sanctions.

“[This letter] represents still further international pressure on Cambodia, which is being bombarded with sanctions already,” said social analyst Seng Sary. “Now, if things remain the same, it will be very difficult for Cambodia to move forward with its economic development.”

“The letter is also a wake-up call that the world is watching Cambodia closely, and that more concrete measures may still be mounted against it,” he said.

Soeng Senkaruna, a spokesman for the Cambodian rights group ADHOC, said that Cambodia has been hurt by the sanctions already imposed against it, and called on Hun Sen’s government to quickly find a “proper and immediate solution” to the country’s political problems.

“Cambodians’ livelihood, economy, and political image are at stake,” he said.

Cambodia has relied heavily on the benefits of trade preferences with the U.S. and Europe in the past, and if more sanctions are imposed, “Cambodia will be in further trouble,” added Ath Thun, president of the Coalition of Cambodian Apparel Workers’ Democratic Union (CCAWDU).

“Our humble request is that the Cambodian government mend its shortcomings and honor its commitments to the obligations stated in its agreements with the United States and the European Union,” he said.

The EU in August suspended tariff-free access to its market under the Everything But Arms (EBA) scheme for around one-fifth of Cambodia’s exports, citing rollbacks on democracy and human rights.

The suspension is expected to result in a loss of around U.S. $1.1 billion of the country’s annual U.S. $5.8 billion in exports to the EU, some 75 percent of which is made up of clothing and textiles—a crucial industry in Cambodia that employs one million people.

Hun Sen has shrugged off the move, but unions have warned that the reinstatement of tariffs on Cambodian exports to the EU could leave 80,000 workers from more than 1,000 garment factories in Cambodia jobless if buyers stop placing orders because of increased costs.

Requests to Cambodian government spokesman Phay Siphan for comment were not answered on Tuesday.

“I don’t know when they are going to let me see him. I am very worried about his health,” Sok Polyma said, adding that her husband suffers in prison from high blood pressure and scabies, made worse by what she called the contaminated water provided to him behind bars.

“Given these circumstances, I will not be weak, and even if I am arrested or mistreated I will keep moving forward,” she said.

Sok Polyma added she believes that prison officials have refused her requests to see her husband because she has joined every Friday with the wives of other jailed opposition activists to call in public for their husbands’ release.

On Nov. 3, she was attacked while riding a motorbike by unidentified men who pushed her to the ground, leaving her with severe injuries.

Prison Department spokesman Nuth Savana said however that Prey Sar Prison is now closed to the public only as a measure to prevent the spread of COVID-19.

“A lot of people come in and out of the prison every day, making the social distancing required by the Health Ministry impossible,” Nuth Savana told RFA’s Khmer Service on Tuesday. “We wear masks and wash our hands, but people cough and sneeze, so what happens if people catch the virus?”

“We think it would be better to end prison visits in Phnom Penh for a while, and see what happens after two weeks,” he said.

Also speaking to RFA, Ny Sokha—a worker with the Cambodian rights group ADHOC—called the ban on visiting her husband in prison a violation of Sok Polyma’s rights.

“[The authorities] aren’t as strict as this in public in their restrictions to prevent the spread of infection, so neither should the prisons,” Ny Sokha said.

“They should just follow the rules of social distancing and good sanitation. That would be enough.”

Maybe the Biden Administration will do something but I doubt it. Probably send Hun Sen a fruit basket with a note that says, 'Stop being a meanie'. No one takes the US seriously anymore.