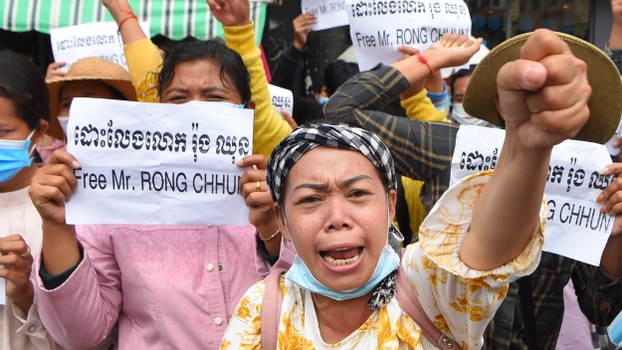 Supporters of Rong Chhun, leader of the Cambodian Confederation of Unions, hold placards during a protest in front of the Phnom Penh Municipal Court, Aug. 1, 2020.

Human rights activists in Cambodia are under increasing attack by authorities, with growing numbers detained and protesters calling for their release also arrested and deprived of their right to peaceful assembly in a troubling “circular pattern,” a United Nations human rights expert said on Monday.

“Excessive force has [also] been used by the security forces to prohibit human rights defenders, many of them women, from exercising their rights to peaceful assembly,” Lawlor said, adding, “Promotion and protection of human rights through peaceful means is not a crime.”

Lawlor referred for example to the case of Rong Chhun, a rights activist arrested at the end of September for claiming the government of the ruling Cambodian People’s Party (CPP) has allowed Vietnam to encroach on farmland along the two countries’ shared border. Protesters calling for his release were later also arrested, with twelve still held without bail and facing a possible two years in prison.

Growing numbers of members of the banned opposition Cambodia National Rescue Party (CNRP) have meanwhile been arrested this year on charges of “incitement” for statements criticizing the rule of Prime Minister Hun Sen.

Around 20 party activists and officials have also been physically assaulted since early 2020, mostly by motorbike-riding attackers targeting their heads. Assailants have used batons and bricks, and also their own vehicles, against victims. None of the perpetrators have been arrested.

“Human rights defenders should never be criminalized for their courageous efforts to protect the rights of others,” Lawlor said, adding that the “circular pattern” of detaining activists for calling for the release of others from detention must end.

The latest wave of arrests comes three years after CNRP President Kem Sokha was arrested in September 2017 over an alleged plot to overthrow the government with the help of the United States. Cambodia’s Supreme Court banned his party in November that year for its supposed role in the scheme.

The move to dissolve the CNRP marked the beginning of a wider crackdown by Hun Sen on the political opposition, NGOs, and the independent media that paved the way for the CPP to win all 125 seats in parliament in the country’s July 2018 general election.

'Supported by the majority'

Writing on Facebook on Monday on the third anniversary of the banning of the CNRP, Paris-based acting party president Sam Rainsy called for “the reestablishment of the CNRP with its full rights as a political party [and] the return of its elected representatives to their functions,” claiming that the party is supported by a majority of the Cambodian people.

High-ranking CNRP lawmakers and other members barred from political activity for five years at the time the party was banned must formally apply to the CPP-led government for “rehabilitation,” though, government spokesman Sok Eysan said.

“If they want to survive [politically], every one of those 118 former CNRP members has to make a request for political rehabilitation to the Ministry of the Interior, and the Ministry will then ask the King to grant them rehabilitation according to the law.”

“So the ball is in their hands,” Sok Eysan said.

A group of wives of jailed Cambodian democracy advocates were pushed away from the palace of Cambodia’s King Sihamoni by palace guards on Friday after trying to present a petition asking for him to help free their husbands from jail, sources told RFA in an earlier report.

The rights to freedom of expression and assembly guaranteed by Cambodia’s constitution have badly eroded in the three years since the CNRP was banned, Cambodians living in Cambodia and Thailand told RFA in interviews.

“The people have had no freedom for the last three years,” said Svay Rieng province resident Rath Kimly, adding that though the Cambodian people “live in fear,” their hearts are still with the CNRP.

“[The authorities] constantly mistreat those who dare to express their opinions, so it is very hard to speak freely.”

“We are sorry that we’ve lost the CNRP. We can still go out to protest, but they threaten, arrest, shackle, and imprison us. As for me, I often go to join protests at the court and in [Phnom Penh’s] Democracy Park. I’m not afraid,” he said.

Speaking on condition of anonymity, a young man living in Phnom Penh said that he and a group of friends had been chased by security forces on Monday from a coffee shop near the former CNRP headquarters building “where we had often gone for meetings.”

“We didn’t expect that they would deploy that many police [in that area],” he said.

“Opposition members living in exile still have their freedom of expression, so we still have hope,” she said. “I will pay any price, even with my last breath, to fight for the country, because we are Khmer people.”

“I will not let anyone destroy my country,” she said.