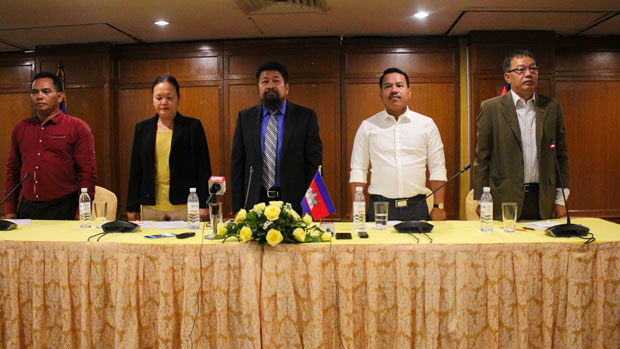 On Sunday, the Ministry of Health shuttered Ly Srey Vyna’s clinic after a patient died while receiving treatment there in late October.

In a handwritten letter addressed to Hun Sen and dated Nov. 10, Ly Srey Vyna thanked the prime minister for sending her to study overseas in the 1980s and asked to become a member of the CPP.

“To date, I don’t belong to any political party,” Ly Srey Vyna wrote.

“I have observed that some people are unjustly attacking Samdech and I don’t like it, so I am volunteering to join hands and develop the country according to Samdech’s leadership without any conditions,” she said, using an honorific for the prime minister.

“Please Samdech, accept me as a party member,” she added.

Ly Srey Vyna also wrote a letter to Minister of Interior Sar Kheng asking for her political “rehabilitation,” to which King Norodom Sihamoni responded by granting her request on Thursday.

“Article 1: Rehabilitate Dr. Ly Srey Vyna, who was previously banned from doing politics for five years,” the king wrote in a decree.

“Article 2: Hun Sen must implement this decree from the date of my signature.”

CNRP President Kem Sokha was arrested in September 2017 for alleged acts of “treason” and the Supreme Court ordered the party’s dissolution two months later, which paved the way for Hun Sen’s ruling Cambodia People’s Party (CPP) to win all 125 seats in parliament in a July 2018 general election.

The Supreme Court also slapped a five-year ban on the political activities of 118 CNRP senior officials for the party’s role in an alleged plot to topple the government.

In December 2018, Hun Sen’s Constitutional Council unanimously approved an amendment to the draft law on political parties, paving the way for the reinstatement of rights to the 118 CNRP officials banned from politics by the Supreme Court’s decision.

The legislation does not provide for the reestablishment of the CNRP, and Hun Sen has said the political rights of the officials will only be reinstated on an individual basis if they had “shown respect for the Supreme Court’s ruling,” and provided they each make an individual request.

Ly Srey Vyna becomes the 14th CNRP member who has requested rehabilitation, although not all of those who have had their political rights restored have joined the CPP.

In March last year, five former officials from the CNRP applied for and received rehabilitation, despite coming under fire from the party and the public, and even receiving accusations that they received money from the government for defying party policy.

Acting CNRP President Sam Rainsy, who has been living in self-imposed exile since November 2015 to avoid a string of what he says are politically motivated convictions, has urged the CNRP to refrain from appealing for political rehabilitation, and said those who do will be branded “traitors.”

‘Every trick in the book’

On Thursday, CPP spokesman Sok Ey San told RFA’s Khmer Service that shutting down Ly Srey Vyna’s clinic and her defection were “unrelated” and that she asked to join the ruling party because she “lost confidence” in the CNRP, which he labeled an “outlaw party.”

“When she lost confidence [in the opposition party] she joined the CPP,” he said. “She did not ask for rehabilitation, only to join the ruling party.”

CNRP deputy president Mu Sochua told RFA that the CPP is “using every trick in the book” to pressure opposition party members to join the ruling party.

She said that in addition to pressuring the opposition, CNRP members have faced physical attacks, surveillance, and threats that if they don’t defect to the ruling party, they will be thrown in jail.

“If we don’t defect, we will be imprisoned, or forced to flee our homes or escape overseas,” said Mu Sochua, who herself is living in self-imposed exile to avoid questionable charges.

“This is huge pressure against us—we are losing all our freedoms.”