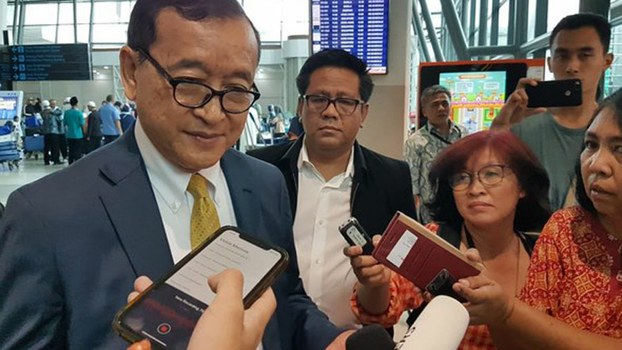 Cambodian opposition leader Sam Rainsy speaks to reporters in the airport in Kuala Lumpur, Malaysia, before flying to Indonesia, Nov. 14, 2019.

A court in Cambodia sentenced seven activists with the country’s banned opposition party—including a new mother—to between five and seven years in prison Tuesday for “treason,” as the party’s acting president vowed to return home from self-imposed exile, despite an aborted earlier attempt.

Sam Sokong, the lawyer for the activists from the Cambodia National Rescue Party (CNRP), said the Tboung Khmum Provincial Court handed five of the seven sentences for seven years, while the other two—who had defected to the ruling Cambodian People’s Party (CPP)—were given five-year suspended sentences.

The seven were tried under Article 453 of Cambodia’s Penal Code for posting comments on Facebook between 2018 and 2019 in support of acting CNRP chief Sam Rainsy’s plan to return to the country from self-imposed exile in Paris, where he has lived since August 2015 to avoid a string of what he says are politically motivated charges and convictions.

Of the five sentenced to seven years, one—Kong Sam An—was arrested on Sept. 6, while the other four were convicted in absentia, he said. Three had fled overseas and one is in hiding inside Cambodia.

Following Tuesday’s proceedings, during which around 100 family members of the defendants protested in front of the court, Sam Sokong dismissed the verdict as “unjust” because his clients “committed no crimes” and vowed to appeal the decision.

“We cannot accept the verdict,” he told RFA’s Khmer Service, noting that the judge convicted one activist who had just given birth.

“The woman is weak—she just gave birth to a baby and she is poor.”

RFA was unable to reach court spokesman Hak Seaklim for comment in Tuesday.

One of the convicted activists, Mean La, who is in hiding, told RFA that the charges against her are “groundless.”

She said she was detained in late 2019 when she was two months pregnant, but later released due to an intervention by Prime Minister Hun Sen, at which point she fled the country.

“It is very unjust for the court to sentence me to seven years in jail because I was never involved in treason,” she said.

“This is purely politically motivated and not at all about implementation of the law.”

Soeung Sengkaruna, spokesperson for local rights group Adhoc, suggested that the verdict had been cooked up to further persecute the CNRP amidst a government campaign targeting the party.

“No one can be involved in politics due to this current political tension,” he said, urging all political leaders to negotiate so that all parties will respect human rights and democratic principles.

Tuesday’s verdict comes as Sam Rainsy this week unveiled new plans to return to Cambodia, without providing a date or any specific details.

Sam Rainsy’s earlier plan to return to Cambodia from self-imposed exile last November was thwarted when Cambodian authorities barred him from entry.

Another CNRP activist convicted on Tuesday who is living abroad, Yem Vannet, told RFA that she would not be cowed by her sentence and plans to join Sam Rainsy to “rescue the country’s democracy” if he returns.

“The court conviction is small thing—it is common that we get accused of treason,” she said.

“I will go to Cambodia with Sam Rainsy to restore democracy in the country.”

Analyst Meas Nee told RFA that Sam Rainsy’s announcement is “just another political strategy” and “unrealistic,” as he has yet to provide details of his plan.

“Sam Rainsy’s announcement is only a strategy to put pressure on Cambodia’s government,” he said.

Meas Nee warned that such an announcement will lead to more detentions of CNRP members, but will benefit the opposition party because it will result in criticism or possible sanctions over political arrests.

On Aug. 25, CNRP activist and former Kampot province commune councilor Pen Mom was sentenced to five years in prison for treason by the Kampot Provincial Court for supporting Sam Rainsy’s planned return to Cambodia in 2019.

She was among more than 100 party members arrested for mobilizing to welcome Sam Rainsy back home, 76 of whom were later released on bail.

Cambodia’s Supreme Court dissolved the CNRP in November 2017, two months after leader Kem Sokha’s arrest, for its role in opposition leader’s alleged scheme. The ban, along with a wider crackdown on NGOs and the independent media, paved the way for Hun Sen’s CPP to win all 125 seats in parliament in the country’s July 2018 general election.