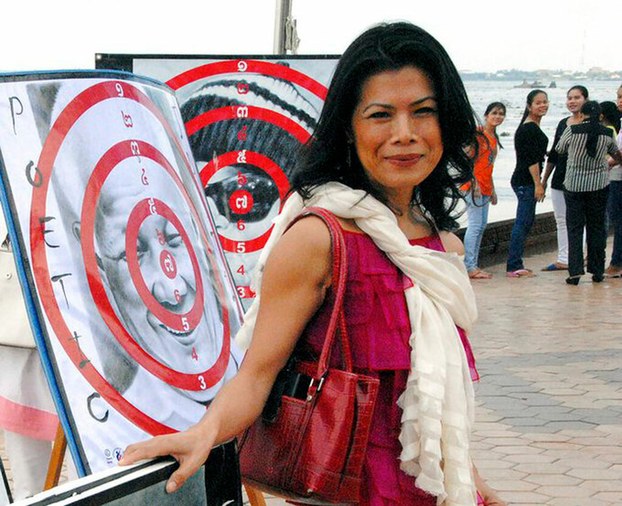 Theary Seng, a Cambodia-based lawyer and vocal critic of Prime Minister Hun Sen who faces trial Nov. 26 for conspiracy to commit treason and incitement of social unrest, in a file photo.

A Cambodian-American human rights lawyer vowed Thursday to challenge treason charges in a Phnom Penh court next week, and underscored her readiness to go to jail by cutting her hair during a video interview with RFA.

Theary Seng, a Cambodia-based lawyer and vocal critic of Prime Minister Hun Sen, is among more 50 supporters and members of the banned Cambodia National Rescue Party summoned in recent weeks to stand trial for conspiracy to commit treason and incitement of social unrest for taking part in nonviolent protests and other actions over the past three years.

Theary, a U.S.-trained lawyer and citizen, told RFA’s Khmer Service she will appear in Phnom Penh Municipal Court on Nov. 26 and challenge the charges

“You cannot charge someone with treason with a piece of paper without giving details like that. What is treason? Nothing is explained in the paper,” she said, holding up a warrant dated Oct. 21, signed by Deputy Prosecutor Sen Heang.

Theary said she is taking on the charges not only for herself, but also for many other CNRP supporters who are unjustly charged and jailed.

“The truth is power and it is a weapon too. So, I have this weapon in court, the power of my speech to draw the national and world attention of justice and truth lovers to support my case,” she told RFA.

RFA reported on Nov. 3 that Sen Heang had called in 13 senior officials and 46 party members, nearly all of whom have fled overseas to avoid punishment following the party’s legal dissolution in November 2017, to stand trial.

Cambodia’s Supreme Court dissolved the opposition CNRP in November 2017, two months after the arrest of its leader Kem Sokha for his role in an alleged scheme to topple Hun Sen with U.S. help.

Theary Seng cuts her hair as a prison lice prevention measure in preparation for a possible jail sentence, Nov. 19, 2020. RFA

Theary underscored her willingness to go to jail by taking out scissors during her livestreamed RFA interview and cutting her hair to prevent lice and scabies in the country’s dirty and overcrowded prisons.

“I have already prepared myself. I know that they will detain me so I am cutting my hair short because I’m afraid of the lice in prison,” she said.

“I want to show that I’m not afraid to go to prison​, and I’m not afraid of injustice because it cannot take away my freedom of conscience,” added Theary.

Theary, born in 1971, lost both her parents and many relatives to the Khmer Rouge regime that ruled Cambodia from 1975-79 and caused the deaths of 1.7 million people from starvation, disease, overwork and executions. She wrote a book about her experiences called Daughter of the Killing Fields and spent years pursuing justice for victims of the Khmer Rouge.

“The court is unjust and the court is violating people’s political right is one thing, but the [charge against her] will bring more trouble to Cambodia because Theary Seng has global connections,” Thyda Khus, former head of the NGO Silka, told RFA. encouraged to social work for the nation.

On Thursday in Battambang province authorities arrested CNRP supporter allegedly over illegal logging, taking him away while he was cooking at home without explanation, his wife said. The man was the 25th CNRP member or supporter arrested in recent months.

U.S. lawmakers on Tuesday called on Secretary of State Mike Pompeo for tougher action against Hun Sen, urging the imposition of targeted sanctions against senior leaders of the country’s ruling party responsible for repression of the opposition party.

I hope there will be a justice of revolution for Khmer to eliminate bad leadership and teams of Hunsen from Cambodia.