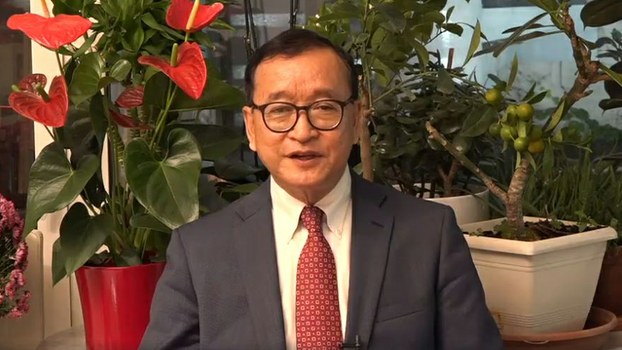 In a screen grab of a video, Sam Rainsy speaks to supporters from his home in Paris, France, Nov. 4, 2019.

Cambodian opposition leader Sam Rainsy vowed anew on Friday to return from five years of exile in France to press for democratic reforms in the Southeast Asian country, saying that an “economic crisis” has made it necessary to make a second attempt to go back after an abortive homecoming in November.

“I will return to Cambodia to solve the economic crisis,” the acting president of the Cambodia National Rescue Party (CNRP) said on an RFA Khmer Service talk show on Friday. “[Prime Minister] Hun Sen doesn’t know how to solve this crisis. He and his government don’t know how to do it,” he said.

Cambodia’s problems can be solved only if a democratic government is established and if “power is returned to the people,” Sam Rainsy said.

The country of 16 million has avoided a major coronavirus outbreak but faces difficult growth prospects as a result of the global and regional economic fallout from the pandemic.

“The global shock triggered by the COVID-19 pandemic has significantly impacted Cambodia’s economy in 2020 at a time when Cambodia also faces the partial suspension of preferential access to the EU market under the ‘Everything but Arms’ initiative,” said the World Bank.

Sam Rainsy said he will ask the European Union to lift trade sanctions aimed at pressing Hun Sen and his ruling Cambodian People’s Party (CPP) to address the country’s worsening rights record and end a long crackdown on the CNRP, NGOs, and the independent media.

He has resided outside Cambodia since late 2015, when while on an overseas trip, he learned through diplomatic channels that he faced imminent arrest after being stripped of parliamentary immunity and had to postpone his return.

Since then, authorities arrested CNRP president Kem Sokha on charges of treason in September 2017, and dissolved the party two months later over an alleged plot to topple Hun Sen. The ban on the political opposition paved the way for the CPP to win all 125 seats in parliament in the country’s July 2018 general election.

Sam Rainsy had tried to return on Nov. 9, 2019 to lead nonviolent protests against Hun Sen, urging Cambodian migrant workers abroad and members of the military to join him, but his plan to enter Cambodia from Thailand was thwarted when he was refused permission to board a Thai Airways plane in Paris.

He was later denied entry into Indonesia after making a brief visit to Malaysia.

Doubling down on arrests

Hun Sen’s response to last year’s return attempt was to double down on the crackdown on the CNRP and its supporters, arresting more than 100 party members for mobilizing to welcome Sam Rainsy back home, later releasing 76 of them on bail.

A provincial court in Cambodia sentenced seven CNRP activists—including a new mother—to between five and seven years in prison Tuesday for “treason” for their plans to welcome Sam Rainsy last November. Four were sentenced in absentia.

But Sam Rainsy denied his earlier plan to return home to press for democratic reforms had been a failure, calling it a “psychological and political success.”

“Hun Sen urged the Thai prime minister to block me from returning home and had even mobilized troops to stop me, but I am not afraid. I am looking for ways to return home soon,” he said.

“Even though Hun Sen is afraid of my shadow, I will go back and scare him to death,” he added.

Speaking to RFA on Friday, CNRP Deputy President Eng Chhai Eang said that circumstances in Cambodia have changed since last year, and that protests in Thailand and that the growing unhappiness of Cambodia’s people will now support Sam Rainsy’s return.

Government spokesman Phay Siphan said however that Sam Rainsy seeks change in Cambodia through violence and not through the democratic process, adding that the opposition leader had consistently promoted disunity in Cambodia during every election.

“Sam Rainsy has always sought to split Khmer unity. He has always said, ‘Where there is Sam Rainsy, there can be no Hun Sen,’” Phay Siphan said.

Analyst Meas Nee told RFA on Tuesday that Sam Rainsy’s announcement is “only a strategy to put pressure on Cambodia’s government.”

Meas Nee said that the announcement will lead to more detentions of CNRP members, but will benefit the opposition party because it will result in criticism or possible sanctions over political arrests

In Phnom Penh, CNRP president Kem Sokha, waiting for his trial on treason charges to resume after a delay caused by the coronavirus outbreak, continued to receive foreign diplomats at his home despite warnings from the court that he was violating a court order banning him from political activity.

Writing on his Facebook page on Sept. 25, Kem Sokha thanked European Union ambassador to Cambodia Carmen Moreno who had visited to hold discussions following his participation in religious ceremonies and social activities with supporters in the provinces.

Also on Friday, a CNRP activist’s wife who was attacked by security guards during a recent protest in Phnom Penh called on the courts to free her husband, Sun Thun, and filed a criminal complaint against the guards who had attacked her.

Seng Chanthorn, the wife of CNRP activist Sun Thun, was admitted to the hospital with internal injuries after authorities from the city’s Prampi Makara district threw her to the street, causing her to pass out, as they broke up the wives’ weekly “Black Friday” campaign demanding the release of 17 CNRP activists from Prey Sar Prison.

She said that one of the guards who attacked her had wanted to kill her, and demanded he be punished “according to the law.”

“If he didn’t want to kill me, he shouldn’t have done it. I want the courts to prosecute [the attackers] and put them in prison,” she said.

More than 25 CNRP wives and other supporters continued their weekly protest outside the Phnom Penh Municipal Court on Friday as Seng Chanthorn handed her complaint to court officials.