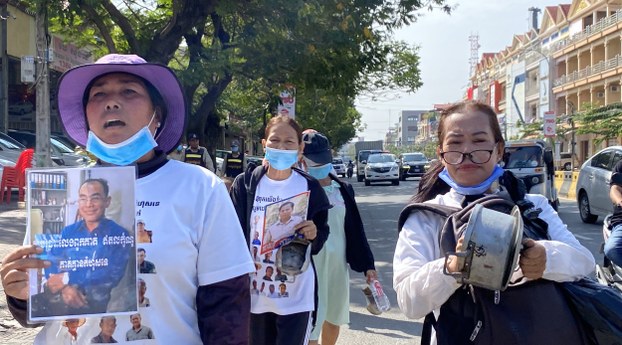 Unidentified men harassing the wife of a jailed Cambodian political opposition figure have told her to defect to the ruling Cambodian People’s Party (CPP) to secure her husband’s freedom, sources in the country said on Tuesday.

Dressed in civilian clothes and following her on motorbikes, the five men have been hectoring Prum Chantha, wife of jailed activist Kak Komphear, to abandon her protests calling for her husband’s release, Prum Chantha told RFA’s Khmer Service.

Her husband, a member of the banned Cambodia National Rescue Party and one of at least 17 CNRP activists accused or convicted of “incitement” after making comments critical of Prime Minister Hun Sen’s leadership, had done nothing to justify his jailing, Prum Chantha said, vowing never to surrender to threats from the government.

“I told them that if I gave in, this would mean my husband was guilty of some crime,” she said. “Even in prison, he was told to write a letter of apology, and I told him that if he dared to do that I would divorce him right away, because he has not done anything wrong.”

Prum Chantha said she has appealed to local and international NGOs to monitor the campaign of harassment against her, adding that if she is ever said to suffer a traffic accident or similar event, this should be regarded as “the work of the authorities.”

On Nov. 3, Sok Bolyma—the wife of another jailed CNRP activist, and a friend of Prum Chantha’s—was struck by a motorcycle, leaving her with a badly injured leg, but Prum Chantha said they will continue to protest together every Friday until their husbands are freed from jail.

“I am using my rights. I am a Cambodian. I am not afraid,” she said.

Asked for comment on Prum Chantha’s allegations on Nov. 10, Phnom Penh governor Khuong Sreng hung up the phone, but government spokesman Phay Siphan told RFA that he was unconcerned over charges made by the wife of an opposition activist.

“If she thinks someone has violated her rights, she should file a petition with the courts or ask other organizations to get justice for her. I don’t know whether these accusations are true or false,” he said.

Soeung Senkaruna, spokesman for the Cambodian rights group ADHOC, said that it is illegal to force people to defect from one political party to another, adding that Prum Chantha is being persecuted because of her campaign to win her husband’s freedom.

“We have noticed that activists who are forced to sign agreements to stop protesting or to defect [to the CPP] are never arrested or charged, so we can clearly see that the arrests and indictments or other forms of persecution of opposition activists are purely politically motivated,” he said.

Prum Chantha’s husband Kak Komphear was arrested on May 31 on charges of conspiracy to incite soldiers to disobey their orders and of incitement to commit other crimes, and has been in Prey Sar Prison for the last five months.

Her 15-year-old son Kak Sovanchhay was also detained by Phnom Penh authorities for two days after claiming he had been physically assaulted during questioning in early October.

Cambodia’s Supreme Court dissolved the CNRP in November 2017, two months after the arrest of its leader Kem Sokha for his role in an alleged scheme to topple the government of Hun Sen. The ban, along with a wider crackdown on NGOs and the independent media, paved the way for Hun Sen’s ruling CPP to win all 125 seats in the country’s 2018 general election.

Around 20 CNRP activists and officials have been physically assaulted since early 2020, mostly by motorbike-riding attackers targeting their heads. Assailants have used batons and bricks, and also their own vehicles, against victims. None of the perpetrators have been arrested.