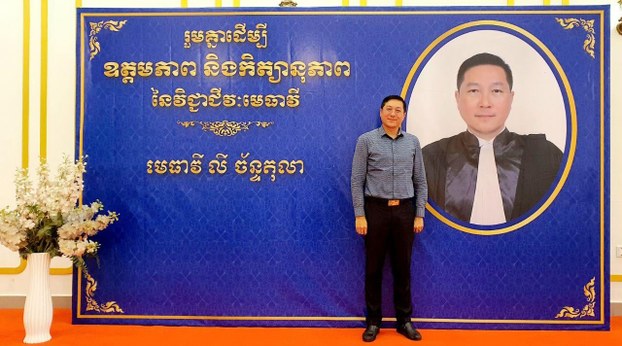 Ly Chantola, newly elected president of the Bar Association of Cambodia, is shown in a Sept. 28, 2020 photo.

A lawyer known for supporting Cambodian Prime Minister Hun Sen was elected Friday as president of the Bar Association of Cambodia, raising concerns over political bias in the association and prompting calls for a review of election procedures.

Ly Chantola, who helped the government three years ago draft a law dissolving the opposition Cambodia National Rescue Party (CNRP), received 1,444 votes in the Oct. 16 election, easily defeating four other candidates who received votes ranging from 130 votes at the highest to 26 votes at the lowest.

In a statement following the announcement of the election’s results, Ly Chantola said that no serious differences had emerged between his own proposals and views and those of the other four candidates—Ket Khy, Sam Sokong, Sar Sovann, and Sek Sorphoan.

“Although some of our policy proposals were different, and some were the same, the differences among us were not so great that we ended up arguing with each other,” Ly Chantola said, calling the conduct of the election that raised him to office “a model” for future votes.

Outgoing association president Suon Visal voiced support for the new president, whose term in office in the 2,151-member association will last for two years but may be extended through another vote.

Ly Chantoly had been his own choice to lead the association charged with protecting the professionalism and common interests of Cambodia’s legal profession, he said.

“I hope he is capable enough to lead the Bar Association,” Suon Visal said, adding,  “Had he not won, and had some other candidate won instead, I would now support that candidate, because it is the election result itself that we must respect.”

“But for now, I’m satisfied with the results of this election.”

Disparities in wealth and political influence have corrupted campaign procedures, however, and may have helped pave the way for Ly Chantola’s success, Choung Chuongy—a lawyer defending political opposition officials and activists—told RFA’s Khmer Service on Friday.

Some candidates spend tens of thousands of dollars to invite voting association members to lavish parties or use the influence of powerful politicians to lure voters, Coung Cuongy said, calling himself “not fully satisfied” with the election’s results.

Greater transparency is needed in campaign procedures, while limits should be imposed on the amounts of money candidates may spend to win election, he said.

“I would like to see candidates compete for the position of president of the Bar Association fairly and with integrity, and not use money or the influence of people in power to help win the election.”

Ly Chantola, who has posed for photos with the long-ruling Hun Sen and his family, helped his government prepare the case in which Cambodia’s Supreme Court dissolved the opposition CNRP in November 2017, two months after the arrest of its leader Kem Sokha for his role in an alleged scheme to topple Hun Sen.

He now serves on the government’s legal team prosecuting Kem Sokha on charges of treason.

The ban on the CNRP, along with a wider crackdown on NGOs and the independent media, cleared the way for Hun Sun’s ruling Cambodian People’s Party (CPP) to win all 125 seats in parliament in the country’s July 2018 general election.

At least 17 CNRP members have been detained in Phnom Penh’s Prey Sar Prison since the start of the coronavirus pandemic on charges of “incitement” for comments they made deemed critical of Hun Sen’s leadership.