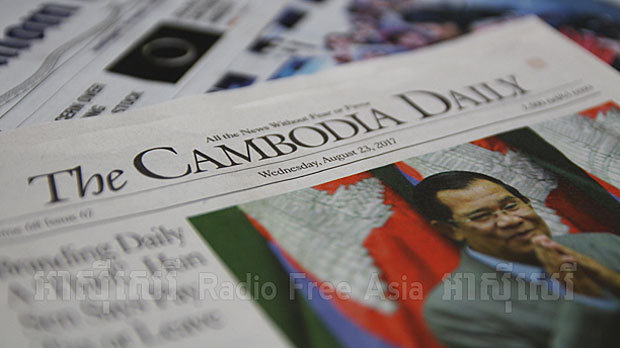 A court in Cambodia’s Rattanakiri province on Tuesday dropped felony charges of “incitement” against two former reporters for the now-shuttered Cambodia Daily newspaper, saying that evidence presented against the pair did not support the case going to trial.

The case against Aun Pheap and Zsombor Peter was launched in 2017 after the two reporters interviewed voters in Rattanakiri’s Pate commune five years after  a 2012 election in which candidates from the opposition Sam Rainsy party were elected instead of candidates from the ruling Cambodian People’s Party (CPP).

Commune officials now tied to the CPP had tried to block the interviews, accusing the two reporters of trying to incite voters to support the opposition Cambodia National Rescue Party (CNRP) in coming elections.

The two left Cambodia one week before the Cambodia Daily, known for its independent reporting on political and social problems in the country, closed its office in Sept. 2017 under pressure over charges of what the government said were unpaid taxes totaling U.S. $6.3 million.

The defense attorney for the two journalists, Sek Sophorn, told RFA’s Khmer Service on Tuesday that the Rattanakiri court dropped the charges after weighing the separate arguments of his clients and of the plaintiff Pate commune chief Romam Yuote..

“The court ruled in favor of my clients Aun Pheap and Peter, and freed them from any charge to be held in a public trial,” Sok Sophorn said, adding, “It examined all angles of the arguments of both sides, and gave justice to my clients.”

Romam Yuote, Pate commune chief from 2012-2017, then withdrew his complaint, Sok Sophorn said, speaking to Cambodian radio program Voice of Democracy in an interview on Tuesday.

“He said that he was ending his complaint and that such a long time had passed that he had almost forgotten all about the case, and the judge then asked him to confirm that he really wanted to drop his complaint.”

Human rights and journalists’ groups welcomed the court’s decision and urged Cambodian courts to drop outstanding charges against other journalists, including charges of espionage filed against two former RFA reporters, Yeang Sothearin and Uon Chhin, who were charged with “illegally collecting information for a foreign source” after RFA closed its bureau in the capital in September 2017.

The two face continued restrictions on their movements while they await trial on the charge, and face from seven to 15 years in prison if convicted.

“I urge the government and the courts to use the press law, not criminal law, when dealing with complaints against journalists. Otherwise they won’t be able to do their jobs,” Nop Vy, executive director of the CamboJA journalists’ association told RFA.

Also speaking to RFA, Am Sam Ath—senior investigator with the rights group Licadho—said he would like to see criminal charges dropped against all journalists currently facing trial, adding that the country’s courts should “review and reconsider what freedom of the press means.”

“Please do not violate the freedom of the press or interfere with the profession of journalists,” he said.