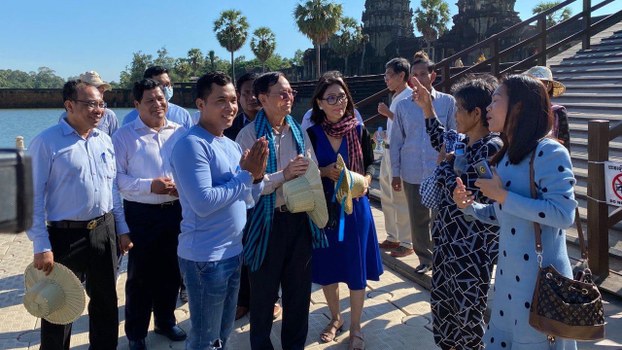 Cambodia’s Phnom Penh Municipal Court is delaying the treason trial of opposition Cambodia National Rescue Party (CNRP) chief Kem Sokha in the hopes that it will cause his party to fracture, however there are no signs of that happening, observers and the party’s acting leader said Friday.

Cambodia’s Supreme Court dissolved the CNRP in November 2017, two months after the arrest of Kem Sokha for his role in an alleged scheme to topple Prime Minister Hun Sen with the help of the U.S. government. His trial began on Jan. 15 but was suspended in March on the pretext of the coronavirus pandemic and Hun Sen recently hinted that it may not resume until 2024.

The ban marked the beginning of a wider crackdown by Hun Sen on the political opposition, NGOs, and the independent media that paved the way for his ruling Cambodian People’s Party (CPP) to win all 125 seats in parliament in the country’s July 2018 general election.

Acting CNRP president Sam Rainsy has lived in self-imposed exile in France since late 2015, citing a raft of what he says are politically motivated charges and convictions. He had tried to return on Nov. 9, 2019 to lead nonviolent protests against Hun Sen, urging Cambodian migrant workers abroad and members of the military to join him, but his plan to enter Cambodia from Thailand was thwarted when he was refused permission to board a Thai Airways plane in Paris.

Speaking to RFA’s Khmer Service on Friday, social analyst Seng Sary said the delay of Kem Sokha’s trial was part of a bid by the government to “buy time” and induce a split within the upper ranks of the CNRP.

“To date, while there are suspicions about a possible internal conflict between the [CNRP] leaders, we’ve seen no signs of a rift, so the ruling party is being prudent,” he said.

Am Sam Ath, a lead investigator for local rights group Licadho, said the delay had denied Kem Sokha his right to justice.

He noted that newly appointed Justice Minister Koeut Rith had vowed to resolve the country’s backlog of court cases and said the CNRP leader’s case should be included.

“To put an end to any suspicions, the court needs to schedule a date for the trial,” he told RFA.

RFA was unable to reach Phnom Penh Municipal Court spokesman Ey Rin for comment on the reason for the trial’s delay, but CPP spokesman Sok Ey San defended the decision to halt proceedings.

He said the court wants to end the case “soon,” but cited the pandemic and heavy flooding during the rainy season as reasons for why it cannot continue for now.

Sok Ey San also dismissed Am Sam Ath’s assertion that Koeut Rith could circumvent the normal workings of the court.

“The new Justice Minister has worked on many cases,” he said. “The minister can’t interfere in the court’s process.”

Sam Rainsy told RFA Friday that he is planning to return to Cambodia “at any time” and is simply “waiting for an opportunity.”

On Tuesday, Phnom Penh’s deputy prosecutor Sen Heang posted a summons posted in front of the CNRP’s headquarters, calling in 13 senior officials and 46 party members—all of whom have fled overseas to avoid punishment following the party’s dissolution—to stand trial later this month on treason and incitement charges.

Sam Rainsy said that now is the time for him and other senior CNRP officials to return, citing the summons.

“If the court summoned us, Hun Sen’s government must allow us to return, but they won’t. It’s just a show. They are closing the door for us.”

Sam Rainsy claimed that Hun Sen is “afraid” of the CNRP, which he said “is still alive in millions of people’s hearts.”

Sam Rainsy echoed Seng Sary’s claim that Hun Sen is using the court to try to split him from Kem Sokha.

“Kem Sokha and Sam Rainsy are united,” he said.

“Hun Sen is afraid. The Hun Sen strategy is preventing Kem Sokha and Sam Rainsy from meeting and taking part in an election.”

Sam Rainsy also suggested that Hun Sen is “taking Kem Sokha hostage” because there is no evidence to convict him.

Kem Sokha maintains his innocence and his lawyers have all along said that prosecutors lack evidence to convict. His trial has been dismissed as a sham by rights groups and Western governments, and in March, U.S. Ambassador Patrick Murphy issued a rare statement denouncing what he said were “fabricated conspiracy theories about the United States” introduced by the prosecution.

“[Hun Sen] is buying time to delay the trial” to make sure Kem Sokha is unable to undertake political activities or travel overseas, Sam Rainsy said.

“Kem Sokha has not changed his mind. He is loyal and smart,” he said, noting that the party president had not asked for political rehabilitation or to form a new party since his arrest and the dissolution of the CNRP.

“Hun Sen is dreaming—he is buying time. There is no way this strategy works.”