Cambodian Activists’ Wives Are Rebuffed After Petitioning King For Help 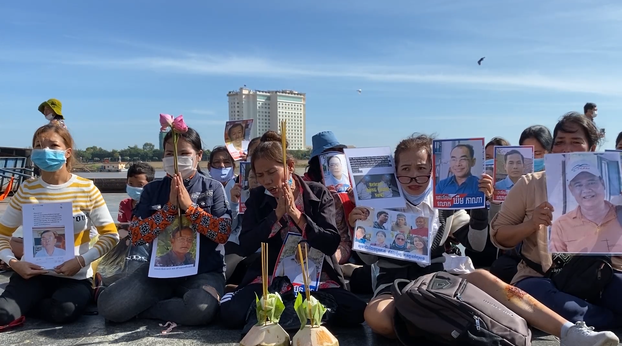 Wives of jailed CNRP activists protest outside the palace of Cambodia's King Sihamoni for their husbands' release, Nov. 13, 2020.

A group of wives of Cambodian political activists were turned away from the palace of Cambodia’s King Sihamoni on Friday after trying to present a petition asking for him to help free their husbands from jail, sources in the country said.

After sitting for a while in prayer, the group had marched to the royal palace in Phnom Penh’s Daun Penh district, but were pushed back by security guards after a palace representative came out to speak with them but declined to receive their petition, one weeping protester told RFA afterward.

“If the King loves his people, he must accept our petition and open his heart to see our suffering,” she said, adding that she has lost hope in the fair handling of her husband’s case in the Cambodian courts or by “corrupt officials.”

“We are in pain, and we need the King’s help,” she said. “We have traveled from provinces far away, and we are so disappointed in the King. The King must serve his people.”

Prumh Chantha, wife of a jailed CNRP lawmaker, told RFA: “For the past several months they have denied me justice, even though I tried to petition the court. They didn’t let me. They didn’t even allow me to stand in front of the courthouse.”

Cambodia’s Supreme Court dissolved the CNRP in November 2017, two months after the arrest of its leader Kem Sokha for his role in an alleged scheme to topple the government of Hun Sen.

The ban, along with a wider crackdown on NGOs and the independent media, paved the way for Hun Sen’s ruling Cambodian People’s Party (CPP) to win all 125 seats in the country’s 2018 general election.

Also on Friday, another activist’s wife, Prum Chantha, said that guards had not allowed protesters to sit under the shade of trees outside the palace, forcing them instead to sit uncovered in the sun.

“I am a Cambodian, and this is my own land I am standing on,” she said. “But I don’t know when I will get freedom and justice.”

'A form of persecution'

Ny Sokha of the Cambodian rights group ADHOC said however that the activists’ wives turned away from the palace had been exercising rights guaranteed to them by Cambodia’s own constitution.

“The authorities’ actions [in these cases] can be considered provocations and a form of persecution aimed at stopping the protests,” he said.

Wives of jailed CNRP members have protested in public each Friday for their husbands’ release for several weeks, with some reporting being followed afterward by unidentified men, and at least one being told to defect to the CPP in exchange for her husband’s freedom.

Around 20 CNRP activists and officials have meanwhile been physically assaulted since early 2020, mostly by motorbike-riding attackers targeting their heads. Assailants have used batons and bricks, and also their own vehicles, against victims.

None of the perpetrators have been arrested.

The people in power in Cambodia are all corrupt including the King. Now is the time for activists to seek help from the internation community because all other options are a dead end and there won't be any justice. Just oppression.