Family Claims Cambodian Detainee Was Tortured to Death in Prison, Despite Suicide Ruling 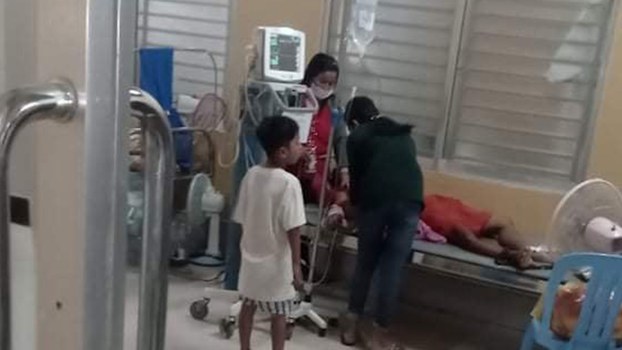 A Cambodian man suffering from mental illness who died in detention in Battambang province last month was tortured and murdered by prison guards, his aunt said Friday, as a local rights group demanded a probe into his death.

On April 19, 38-year-old Orn Tith stole a car and damaged it after driving it onto private property. When his family was unable to pay for the damages, police arrested him and sent him to the Battambang Provincial Correction Center.

On April 30, prison authorities transported Orn Tith—who has been medically certified as having a mental health condition—to the Battambang Provincial Hospital, where he was later pronounced dead. Prison officials ruled his death a suicide.

Orn Tith’s aunt, Yorn Kim, told RFA’s Khmer Service Friday that her nephew’s hands, legs, back, and waist were covered in bruises when his family went to retrieve his body, saying it appeared as if he had been beaten with a baton or thick cable while handcuffed and shackled.

She said she believes he was tortured to death and demanded that the provincial court bring his murderers to justice, adding that she filed a complaint with court authorities on Thursday.

“I can assure you that this is a torture case, because there is no way my nephew committed suicide,” she said.

“He is mentally ill. He could not kill himself. I could believe if he died by drowning or hanging, but what weapons did he use to kill himself?”

Yorn Kim called her nephew’s case an example of how Cambodia’s justice system is “very biased against the poor, who don’t have any power.”

Ministry of Justice spokesman Chin Malin could not be reached for comment Friday, but earlier told RFA that Orn Tith died of “self-inflicted wounds,” not torture or acts of violence.

“If the family members are not satisfied with the explanation, they can file a complaint according to the law—if they have evidence to prove their argument,” he said at the time.

On Friday, Yin Mengly, Battambang provincial coordinator for local rights group Adhoc, called for a “thorough investigation” of Orn Tith’s case, adding that he never should have been arrested and jailed in the first place because of his mental health condition.

“There are suspicious circumstances surrounding the death and [Orn Tith] did not simply die from an illness,” he said.

Yin Mengly said that if it is proven that Orn Tith died as a result of torture, the court is obligated to bring the perpetrators to justice.

Yorn Kim’s claims come shortly after the wife of a man who died from torture while detained for joining a land-rights protest called on the Banteay Meanchey Provincial Court to speed up its investigation into his case and provide her with compensation for his death.

Tuy Sros, a resident of the Ou Chrov district of Banteay Meanchey province, died in police custody on Jan. 1 after being held from Dec. 28 to Dec. 31 following the protest, in which four other villagers were also detained.

His wife, Kim Lak, told RFA that a group of military officers came to her house on April 18 to convince her to drop the court case in exchange for compensation, but said she refused.

“They came and wanted to settle the case,” she said. “I don’t know much about them, but they said they wanted to compromise and asked how much they would have to pay.”

Kim Lak said she is afraid that she will be no longer be able to earn enough money to take care of herself and her 14-year-old daughter.

“It’s very hard now—I don’t have money to pay back our debts,” she said. “I haven’t been able to find a job since I lost my husband.”

‘It was too late’

Another villager who was detained with Tuy Sros and survived the torture named Nouv Noeun said he had filed a complaint to request compensation but has yet to be summoned by the court to give testimony.

“It has been a few months already and the case went cold,” he said.

Nouv Noeun said he was also approached by a group of people on April 18 who asked him to name a price to resolve his case outside of the courts, but he refused.

“It was too late,” he said, adding that he would have considered doing so when he needed treatment for his injuries, but by mid-April had “already suffered greatly.”

“I want a solution that complies with the law,” he said.

Banteay Meanchey provincial governor Um Reatrey could not be reached for comment about the torture cases at the time of publishing.

Soeung Senkarona, spokesman for Adhoc, told RFA that criminal offenses cannot be resolved outside the court system, although the victims can accept compensation.

“The cases should not be delayed, lest the family members lose their trust in the judicial system,” he said.

“They are understandably worried that the court will never resolve their issues.”