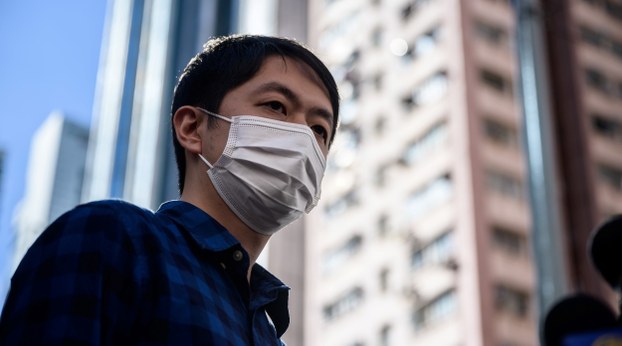 Police in Hong Kong on Wednesday arrested three former pro-democracy lawmakers in connection with protests they carried out in the Legislative Council (LegCo) earlier this year.

The Democratic Party's Ted Hui said he had been accused by police officers arresting him of "creating disturbances that interrupted LegCo proceedings," and was arrested on suspicion of breaches of LegCo Powers and Privileges Ordinance and the Offences Against the Person Ordinance in connection with incidents on May 28 and June 4.

Hui was accused of bringing a rotting plant into the LegCo chamber on May 28, and of splashing a liquid around a meeting room on June 4, causing "mental distress" to LegCo president Andrew Leung, he said via social media.

Hui told reporters that the government could clearly no longer tolerate any opposition voices.

"If the police intervene in the legislature every time, what is the point of having rules of procedure?" he said. "Is everything lawmakers say and do now regulated by the police?"

"What is the difference between this and a police state? The arrest is yet another testament to the people of Hong Kong and to the rest of the world that this regime's suppression of us, of all forms of opposition and dissent, continues unabated," Hui said.

He said the police appeared determined to charge them with something, regardless of whether their actions fitted the crime.

Meanwhile, Land Justice League activist Eddie Chu and former lawmaker Ray Chan were charged with one count of contempt and one count of "attempting to administer a harmful substance with the intent to cause injury, mental anguish, or anguish to another" following his arrest.

U.K.-based rights group Hong Kong Watch said the May incident took place as LegCo debated a law that would criminalize protest against the Chinese national anthem.

Their arrests follow China's disqualification of four pro-democracy LegCo members, which prompted criticism from the U.K. that the ruling Chinese Communist Party (CCP) was in breach of a 1984 treaty promising to protect the city's freedoms.

The disqualifications prompted the mass resignation of 15 pro-democracy lawmakers.

"They are not only entirely disproportionate when considering the alleged action that took place in May and the previous fines the three individuals have paid, but constitute a concerted effort by the Hong Kong Police to retrospectively target former pro-democracy lawmakers," he said.

He called for "coordinated and swift action" from the U.K. and its allies, including the use of targeted sanctions on Hong Kong and Chinese officials.

The arrests come after police dropped charges over an alleged assault by pro-China lawmaker Aron Kwok on Ray Chan in the LegCo chamber.

Defense attorney Johnny So said this was a clear example of selective prosecution by police.

He said the charges of "intention to administer a harmful substance with intent to injure" may not stand up in court.

"It seems that the department of justice will prosecute if they can find a law to do it with ... even traffic safety laws [in the case of investigative journalist Bao Choy]," he said.

The European Union office in Hong Kong and Macau tweeted its concern about the arrests.

"The EU is following closely and with concern the arrests of former pro-democracy lawmakers today in relation to incidents that took place in the Legislative Council," the office said via its official Twitter account.

"It’s definitely a form of political prosecution, if not persecution," she said. "I will call it a continuing scare tactic on the part of the government. The idea is to rule by fear, and to silence all... It’s not targeted at the legislature, it’s targeted at the entire society, to spread this sense of fear, this chilling effect."

Chan and Chu left LegCo when Beijing extended its term by a year following a decision to postpone a general election scheduled for September.

Hui resigned last week along with his colleagues following the disqualifications.

The CCP has presided over a draconian crackdown on dissent in Hong Kong since the imposition of a national security law on the city from July 1.

A business making "yellow" products in support of last year's mass protest movement announced it would temporarily close after someone reported it for violations of the law.

"Our shops in Causeway Bay and Mong Kok will temporarily be closed from Nov. 18," the Yellow Factory said in a statement on its Facebook page.

"The Yellow Factory has no intention of violating the National Security Law, and we will be making some internal adjustments for the sake of our staff and customers," it said.