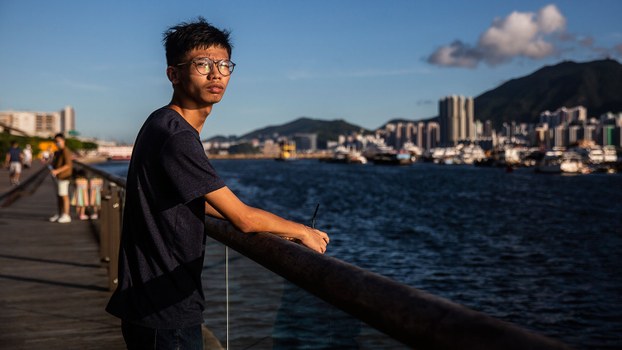 Authorities in Hong Kong have charged 19-year-old pro-independence activist Tony Chung with "secession" under a draconian national security law that took effect in the city on July 1.

"Chung has been officially charged on one count of 'secession,' one count of 'conspiracy to publish seditious material,' as well as two instances of 'money laundering'," Chung's now-disbanded activist group Studentlocalism said on its Facebook page.

Chung appeared at West Kowloon Magistrate's Court on Thursday morning, where his application for bail was denied, the statement said.

Chung was arrested on Oct. 27 for allegedly violating Article 21 of the National Security Law, which forbids anyone from giving any kind of assistance to someone violating the law, and which carries a maximum jail term of 10 years.

He stands accused of "actively organizing, planning, implementing or participating in acts aimed at splitting the country and undermining national unity in Hong Kong from July 1 to Oct. 27 this year, along with others," according to the charges against him.

The money-laundering charges relate to a crowdfunding campaign by Studentlocalism, which called for donations only from those who supported independence for Hong Kong, and to payments totaling nearly H.K.$700,000 made to Chung's personal bank account between January 2018 and July 2020.

Chung is also accused of conspiring to publish seditious publications in Hong Kong between Nov. 30, 2018 and June 9 of this year, before the national security law took effect.

After the hearing, Chung was taken to the notorious Pik Uk Correctional Institution, where he will remain in custody for at least the next 10 weeks pending another hearing in January, the group said.

The decision by the judge to deny bail came after the prosecution claimed that Chung was likely to reoffend and to abscond if released from custody, given that the alleged offenses took place while he was out on bail pending a different charge.

Chung was among four young people arrested by Hong Kong police on July 26 on suspicion of "secession" under the national security law, which took effect on July 1.

The arrestees aged from 16 to 21 were taken into custody in raids in the New Territories districts of Yuen Long, Shatin, and Tuen Mun on suspicion of "organizing and inciting secessionist activities."

Police said they were suspected of posting announcements online calling on people to fight to establish a "Hong Kong nation," of declaring that they would use all necessary means to achieve this end, and of calling for pro-independence groups to unite.

Studentlocalism disbanded ahead of the law's implementation, but as the posts were made after the new law took effect, they fell under articles in the law banning "incitement" to secessionist activities, police said at the time.

Chung and two other activists were arrested separately by national security police on Tuesday after Chung was denied permission to enter the U.S. Consulate, where he reportedly planned to seek political asylum. The other two arrestees, former Studentlocalism members William Chan and Yanni Ho, were granted bail.

A few hours later, when news of Chung's arrest had become public, four other activists entered the Consulate, but were told they couldn't be protected, and eventually ordered to leave, one of them later told the Voice of America (VOA).

Current affairs commentator Liu Ruishao said the fact that Chung has been charged means that the authorities expect to make an example of him.

"The fact that they are bringing such charges means that they ... expect a result that will be in the government's favor," Liu said. "Actually it will likely have the knock-on effect of restricting everyone's behavior in future."

"The effect of [such a prosecution] will be magnified, meaning that a much larger section of the population is actually being targeted," Liu said. "That's what they want to achieve: a chilling effect where people limit their own behavior."

Rights groups have hit out at Chung's arrest and the charges against him as a violation of his right to freedom of expression.

The overseas-based Chinese Human Rights Defenders (CHRD) network called for Chung's immediate release, in a statement on its website on Thursday.

"The charges against Chung, a former member of the group Studentlocalism, are related to posts he made on social media platforms and his advocacy, in violation of his fundamental rights to freedom of expression and association," the group said.

Chung is the second person to be charged under the National Security Law since it took effect. The first was Tong Ying-kit, who rode his motorcycle into a group of police officers during a protest on July 1 while carrying a flag bearing the popular protest slogan "Free Hong Kong, Revolution Now!"

"The National Security Law, imposed on Hong Kong by China’s legislature on June 30, criminalizes the rights to freedom of expression, association and assembly under the guise that non-violent words or conduct may 'endanger national security'," CHRD said.

It called for an independent, international review, led by the United Nations, of China's human rights violations.

Under the terms of the 1997 handover agreement, Hong Kong was promised the continuation of its traditional freedoms of speech and association, as well as universal suffrage.

But Beijing's ruling out of fully democratic elections in 2014, its insistence on the prosecution and disqualification of key opposition figures, and its subsequent imposition of the National Security Law following mass popular protests over diminishing freedoms throughout 2019 have shown that the ruling Chinese Communist Party has no intention of keeping those promises.

The vaguely worded new security law threatens anyone criticizing the Chinese or Hong Kong authorities anywhere in the world.

China's feared state security police have now set up a headquarters in the city to implement the law, while the government has warned that slogans linked to last year's protest movement, including "Free Hong Kong, Revolution Now!", will fall within the law's remit.

The New York-based Human Rights Watch (HRW) earlier said the law will be "devastating" to human rights protections in the city.

It has created specialized secret security agencies, denied fair trial rights, provided sweeping new powers to police, increased restraints on civil society and the media, and weakened judicial oversight, the group said in a report on its website.

The law will also affect the right to education and freedom of information, opinion, and expression in schools, as political statements and discussions are banned from the city's classrooms, and as books by pro-democracy figures are removed from its public libraries, HRW said.

Reported by Lu Xi and Man Hoi-tsan for RFA's Cantonese and Mandarin Services. Translated and edited by Luisetta Mudie.