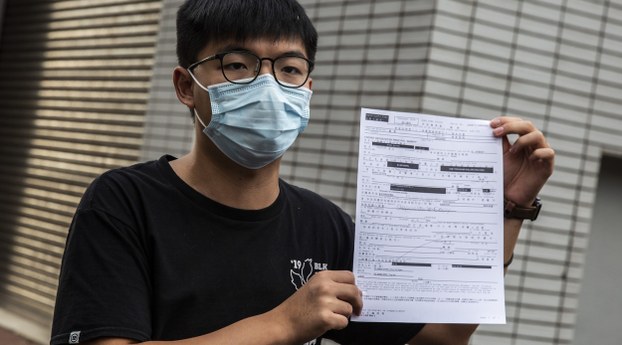 "The arrest is related to participating in an unauthorized assembly on [Oct. 5] last year," it said.

The anti-mask law targeted protesters who covered their faces to evade recognition on video recordings and CCTV footage, and was imposed weeks before the coronavirus pandemic emerged in the central Chinese city of Wuhan in December 2019.

The Hong Kong Alliance in Support of the Patriotic Democratic Movement in China, of which Koo is a member, said he was also told that he allegedly took part in an unauthorized assembly on Oct. 5, the report said.

The move came as Time Magazine named exile Hong Kong democracy campaigner Nathan Law as one of the 100 most influential people of 2020.

Lord Patten of Barnes, known during his tenure as last colonial governor of Hong Kong as Chris Patten, said Law is among the leaders of generations of Hong Kong activists who have stood up to the ruling Chinese Communist Party.

Patten said Law stood alongside Joshua Wong, as well as "father of democracy" Martin Lee, media mogul Jimmy Lai ,and Catholic Cardinal Joseph Zen as a key figure in the democracy movement, adding that they all "risk their freedom for their people’s democratic rights."

In a reference to an ongoing crackdown on dissent in the city following the imposition of a new "national security" regime by Beijing, Patten said China is "crushing ... the rule of law and the liberties of an open society in Hong Kong."

"Xi Jinping and his apparatchiks have broken the promises made to Hong Kong about liberty and local autonomy," wrote Patten, who was loathed by China for trying to broaden the franchise for legislative elections ahead of the 1997 handover to Chinese rule.

"Nathan is the son of a working-class family who became the youngest lawmaker elected to the city legislature," Patten wrote on the Time Magazine website.

"He would not claim any pre-eminent status as a campaigner for democracy and freedom. He is simply a typically brave representative of a generation whose spirit the Communist Party wants to stamp out," his article said. "But you cannot cage the idea of freedom."

"We must all continue to speak up and stand up for Nathan Law and for those who fight for freedom in Hong Kong," Patten, now chancellor of the University of Oxford, wrote.

Law, who is now in the U.K., said in a Facebook post that he was grateful to Patten for his support.

"When I had just arrived in the U.K., I had a meeting with Lord Patten, and we have stayed in touch since," Law said. "I hope that he will continue to speak out on behalf of Hong Kong."

Law, who was the youngest ever lawmaker to enter Hong Kong's Legislative Council (LegCo), only to be stripped of his seat following an edict from Beijing, said he welcomed Patten's emphasis on the role of several generations in driving the city's democracy movement.

Like Patten, Law also mentioned fellow activist Joshua Wong, with whom he founded the political party Demosisto, which was dissolved as China imposed a draconian national security law on Hong Kong without recourse to LegCo.

And he named veteran activists and Democratic Party founding members Martin Lee and Margaret Ng for "setting a precedent for the courageous struggle of the younger generation in the face of attempts by the Chinese Communist Party to silence and oppress the people of Hong Kong."

"I would like to thank Lord Patten for his kind words, and hope that our comrades will continue to take the movement forward, using the principle 'Be water'," Law wrote.

Law announced he had moved to the U.K. shortly after the national security law took effect in Hong Kong. Several pro-democracy groups campaigning for greater autonomy for Hong Kong, including Demosisto, which Law founded along with Joshua Wong and Agnes Chow, announced their dissolution around the same time.

A draconian national security law imposed on Hong Kong by Beijing at the beginning of July has ushered in an ever-widening crackdown on free speech and peaceful dissent, and a new wave of human rights violations.

Chinese and Hong Kong authorities have deployed the law to step up violations of local people's human rights and to undermine the city's rule of law, according to overseas governments and human rights organizations, according to a recent report by the Chinese Human Rights Defenders (CHRD) network.

The crackdown has seen arbitrary arrests of peaceful protesters and pro-independence advocates, media censorship, interference in the democratic election process, and intimidation against overseas activists who fled the city out of fear for retaliation, the CHRD report found.