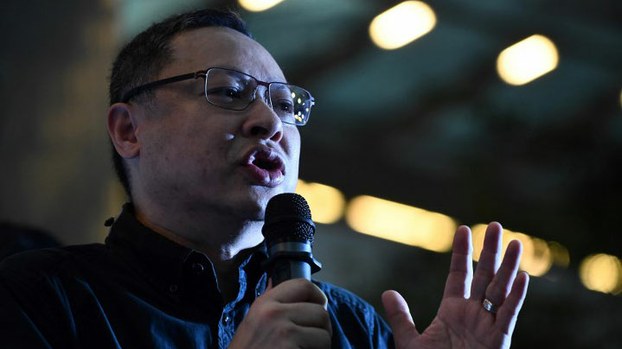 HKU Law professor and one of the leaders of the 2014 Occupy protests Benny Tai speaks during a gathering outside the government headquarters to mark the third anniversary of mass pro-democracy rallies, known as the Umbrella Movement, in Hong Kong, Sept. 28, 2017.

Former Hong Kong University law professor Benny Tai, who was among the instigators of the 2014 Occupy Central pro-democracy movement, has warned that the ruling Chinese Communist Party has ushered in a new era of semi-authoritarian rule with the imposition of a draconian national security law on the city from July 1.

Speaking in an interview with RFA's Cantonese Service, Tai said that there is still hope for the democracy movement, however, which has reached a "critical mass" of public support.

Tai said Hong Kong, which was promised the continuation of its traditional freedoms of speech, publication, and association under the terms of the 1997 handover to China, is now looking at a political system that is closer to that of Singapore.

"Hong Kong has already been through Occupy Central, the Umbrella Movement, the Fishball Revolution, and the anti-extradition movement in its recent history," Tai said. "People are increasingly likely to take action, to do something."

"The number of people willing to stand up to authoritarian government has reached a critical mass," he said.

Tai said Hong Kong still has a strong civil society, based on its professions, including teachers, lawyers and social workers.

"Their sense of civic duty is very strong, and public support has now percolated through to every level of society," he said. "That kind of deep-level community engagement is stronger than any official propaganda."

He said the thing to fear is the authorities -- both the CCP and the Hong Kong government -- seeking to exploit divisions in Hong Kong society to win support for authoritarian rule.

"All through the post-war colonial era, apart from the riots of the 1960s [in which CCP agents provocateurs played a strong role], Hong Kong hasn't had much of a sense of threat," Tai said.

"It has generally been a monoculture, with a mostly Han Chinese population."

Taking the government on in debate

Tai said the way forward for the pro-democracy movement is to take on the government in daily debate, ignoring what is said in the official media.

"It doesn't matter how much they broadcast on TV; we should take the fight to them in our communities on a daily basis, and work in the community," he said.

"Everyone's going to turn off their TV when they see Carrie Lam anyway."

He said the biggest threat to Hong Kong's civil society comes from recent changes to the curriculum in state-run schools, and from the damage done to the rule of law by the national security law.

"The current problem in Hong Kong is that we are becoming more and more like the mainland Chinese system ... in which the people always lose," he said. "So people don't know when they are breaking the rules."

"At least in Singapore, there is a sense that everyone should follow the rules."

Tai, who served four months of a 16-month prison sentence for "inciting" the Occupy Central movement, lost his job earlier this year, after the University of Hong Kong terminated his contract.

"Hong Kong is moving from a semi-democracy to a semi-authoritarian system, and people need to work hard to slow down that transition, maybe even reverse it," Tai told RFA.

On April 24, 2019, Tai and Occupy co-founder Chan Kin-man were sentenced to 16 months' imprisonment by the West Kowloon District Court for "conspiracy to cause a public nuisance," while fellow movement leader Chu Yiu-ming, 75, was given a suspended prison term, owing to his age and poor health.

Tai, a law professor at the University of Hong Kong, and retired sociology professor Chan were also found guilty of "inciting others to cause a public nuisance" alongside Civic Party lawmaker Tanya Chan, who received a suspended eight-month sentence following her diagnosis with a brain tumor.