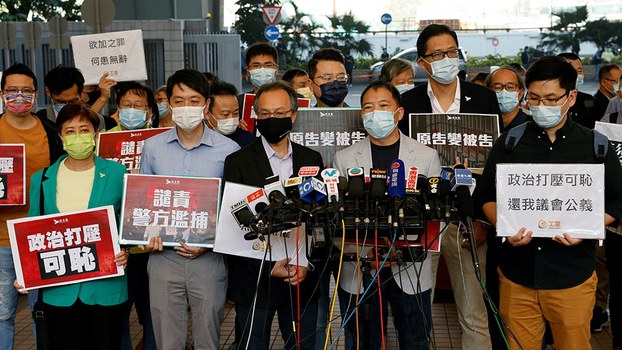 Police in Hong Kong have charged eight pro-democracy lawmakers and activists with violating privilege laws at a May 8 scuffle in the city's Legislative Council (LegCo), under legislation that was originally intended to protect lawmakers' right to speak freely.

Dozens of protesters gathered outside the court building on Friday, holding banners and chanting "Civil disobedience -- we won't be afraid!  Shame on political persecution!"

All eight were charged with "contempt" or "interference and obstruction" under the Powers and Privileges Ordinance, in connection with chaotic scenes and physical scuffles in LegCo sparked by a unilateral and pre-emptive takeover of the powerful House Committee chair by pro-Beijing lawmaker Starry Lee.

When pro-democracy lawmakers protested at the meeting, which was called to elect a new chairperson, they were ejected by LegCo security guards, one of whom was apparently injured during the prolonged scuffles, according to social media footage of the chaos.

No pro-China lawmakers were arrested in connection with the incident.

The eight won't be due in court again until Feb. 11, after the Court of Final Appeal decides an appeal by former lawmaker Leung Kwok-hung against similar charges, after he snatched a folder of documents from a government official at a LegCo panel meeting in 2016.

Wu, who is chairman of the Democratic Party, said the political issues highlighted by the scuffle should have been resolved politically.

"We all know very well that in today's Hong Kong Special Administrative Region (SAR), that we are not equal before the law," Wu told reporters after his release on bail.

"The Attorney General's chambers, the police, and the government are all in cahoots, and they will bring all kinds of legal proceedings against anyone who holds different views from the government," he said.

"This will sow fear and make it impossible to challenge the regime, either in word or deed," Wu said.

Lines are being drawn

Labour Party lawmaker Fernando Cheung said his charge was based on his chanting of slogans, as he hadn't taken any physical action at all during the incident.

"Regardless of the final outcome of this case, there are more and more lines being drawn," Cheung said. "If this regime continues to abuse our judicial system, and if the police continue to use force to suppress dissent, there will be no more peace for any of us."

The U.K.-based rights group Hong Kong Watch meanwhile warned that the ruling Chinese Communist Party intends to take charge of every aspect of life in the city, as part of its 14th five-year plan.

Citing a statement on Tuesday from the CCP Central Committee, the group said Beijing intends to implement "comprehensive governance" over Hong Kong during the next five years.

Draft proposals designed to "curb and prevent foreign forces from meddling with Hong Kong and Macau affairs," say the central government should wield comprehensive control over the two cities, including their legal systems, law enforcement and national security regimes.

"Movements by Beijing to impose direct governance on Hong Kong would spell the end of democratic elections, a free press, free expression, academic freedom, freedom of religion or belief, and the rule of law," the group's chief executive Benedict Rogers said in a statement on its website.

He said direct rule by Beijing would be a clear breach of China’s commitments under the 1984 Sino-British Joint Declaration in which it promised to maintain Hong Kong’s autonomy, freedoms, and rule of law, for at least 50 years from the 1997 handover.

"This week the Chinese Communist Party has sign-posted its intentions for the city of Hong Kong," Rogers said, calling on the international community to condemn such proposals and to threaten sanctions for any violation of Beijing's international legal commitments.