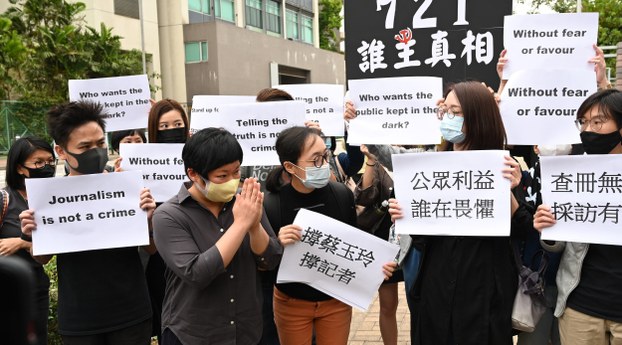 An investigative journalist arrested by Hong Kong police after she made a documentary exposing their handling of the July 21, 2019 mob attacks on train passengers in Yuen Long has been released on bail, pending a further court hearing in January.

Bao Choy, a producer contracted to make the documentary by government broadcaster RTHK, said her arrest had sparked growing fears that the authorities are actively seeking to impede press freedom in the city, in the wake of a draconian national security law imposed on Hong Kong from July 1 following months of protests.

Choy, whose investigative documentary showed that police were present as baton-wielding men in white T-shirts began to gather in Yuen Long ahead of the bloody attack on passengers and passersby, was arrested at her home in Mei Foo on Nov. 3.

She was arrested on suspicion of road traffic violations relating to vehicle registration searches used in the program.

Protesters chanted "Journalism is not a crime!" and "Stand up for press freedom!" as Choy spoke to reporters outside Fanling Magistrate's Court on Tuesday.

"It has been a common practice for years that journalists do research on cars and vehicles for the purposes of journalism," Choy said. "There has been a very strong social understanding ... that journalists are free to obtain public information for the sake of the public interest."

"I do not see what reason the government has to restrict the flow of information," she said.

"Given the purpose of public interest ... a lot of scholars, unions, and lawyers have expressed concerns and worries [about] whether the police are trying to use the law to suppress press freedom, and [about] whether journalists are free in future to obtain public information."

"I would urge the government to listen to [these] voices and opinions in society."

The Hong Kong Connection TV documentary titled “7.21 Who Owns the Truth?” showed clips from surveillance cameras at shops in Yuen Long and interviewed people who were identified in the footage.

Its airing forced police to admit that they already had a presence in the town but did nothing to prevent the attack, following initial denials.

Choy's bail came as RTHK announced its plan to play the Chinese national anthem ahead of the 8:00 a.m. news every day from Nov. 16, sparking further concerns that the broadcaster, which has already been criticized by the government over a satirical news show that took aim at police actions in recent months, could be forced to toe the official line of the ruling Chinese Communist Party (CCP).

Among the crowd supporting Choy were members of the Hong Kong Journalists Association (HKJA), the RTHK Programme Staff Union, and the Support Public Broadcasting Campaign.

Lo Yuk-kai, a spokesman for the PSB Now! campaign group, said it is very concerned about the future of factual journalism in Hong Kong.

"We are very worried about the freedom of expression, especially when it comes to political opinions, factual reporting, or the dissemination of information about an event, and that the authorities are not respecting this right," Lo said.

"If the Transport Department sees that freedom of the press is guaranteed in the constitution, in our political system or in human rights law, they should not ... take no account of it," he said.

He said the search form had been edited to remove the "Other" option in the "Purpose of Access" field. Journalists had previously written "news coverage" in that field and carried on with their search.

Anyone who continues with a search now can only select "Other traffic-related purposes," leaving them open, like Choy, to accusations of making a false statement under traffic laws.

Meanwhile, police are continuing to make arrests under the national security law, which criminalizes criticism of the Hong Kong and Chinese authorities, as well as any public statements deemed subversive or supportive of independence for Hong Kong.

Former Studentlocalism member Tim Luk was arrested on Monday by the National Security Agency for "assisting fugitives," the former campaign group said in a statement on its website. Luk's arrest came after the arrests of its former members Tony Chung, William Chan, and Yanni Ho last month.

Chung was arrested on Oct. 27 for allegedly violating Article 21 of the National Security Law, which forbids anyone from giving any kind of assistance to someone violating the law, and which carries a maximum jail term of 10 years.

He stands accused of "actively organizing, planning, implementing, or participating in acts aimed at splitting the country and undermining national unity in Hong Kong from July 1 to Oct. 27 this year, along with others," according to the charges against him.

After the hearing, Chung was taken to the notorious Pik Uk Correctional Institution, where he will remain in custody for at least the next 10 weeks pending another hearing in January.

In Washington, the State Department announced sanctions against another four Chinese and Hong Kong officials for their role in implementing the national security law, and "threatening the peace, security, and autonomy of Hong Kong."

"These individuals will be barred from traveling to the United States and their assets within the jurisdiction of the United States or in the possession or control of U.S. persons will be blocked," the State Department said in a statement on its website.

"These actions underscore U.S. resolve to hold accountable key figures that are actively eviscerating the freedoms of the people of Hong Kong and undermining Hong Kong’s autonomy."

The moves come amid growing concern that the ruling Chinese Communist Party (CCP) is considering disqualifying more pro-democracy members of Hong Kong's Legislative Council (LegCo) over filibustering, a tactic that has been widely used by the opposition camp since earlier decrees stripped them of the effective power of veto in the legislature.

Nineteen pro-democracy lawmakers said on Monday they would resign if Beijing moves to have any of them disqualified.

Media reports have indicated that the National People’s Congress standing committee (NPCSC) will announce the disqualifications of Alvin Yeung, Dennis Kwok, Kwok Ka-ki, and Kenneth Leung, on the grounds that they have violated their oaths of allegiance by filibustering.

Reported by Lu Xi and Lau Siu-fung for RFA's Mandarin and Cantonese Services. Translated and edited by Luisetta Mudie.