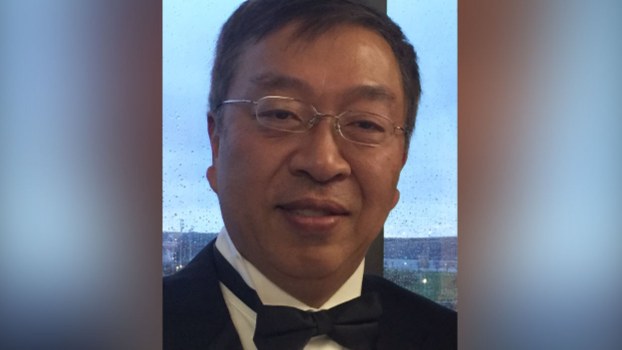 Miles Yu, Chief China Planning Adviser to US Secretary of State Mike Pompeo, is shown in an undated photo.
Courtesy of Miles Yu

The United States is reassessing its policy towards the democratic island of Taiwan in the wake of the Chinese Communist Party (CCP)'s crackdown on peaceful dissent in Hong Kong, according to Miles Yu, head of the team advising U.S. Secretary of State Mike Pompeo on China. Speaking to RFA as Secretary of State Mike Pompeo said the island isn't a part of China, Yu explained why he thinks that Trump's policy will continue to garner broad support in Washington:

RFA: What is your view of the mass resignation of pro-democracy lawmakers in Hong Kong in response to the disqualification of four of their colleagues by Beijing?

Miles Yu: This is another concrete example of how the CCP is strangling Hong Kong’s autonomy. Things have gotten even more serious now, so we have pro-democracy lawmakers deciding to resign en masse. This shows that pro-democracy politicians have realized that things have changed, with regard to how hopeful the fight for freedom and democracy is under the existing system in Hong Kong. They are disillusioned, which is why they resigned en masse.

The decision from Beijing a few days ago was a complete attack on the Basic Law. It authorizes the Hong Kong government to veto any elected representative, rather than going through the courts, the ballot box, or through the Legislative Council (LegCo) itself. This means that anyone in the pro-democracy camp can be disqualified by the Hong Kong government in the name of national security or other unreasonable pretexts. The democrats feel that it's impossible to implement their political ideals under that system.

RFA: Is it possible for the United States or the international community to do more for Hong Kong?

Miles Yu: That all depends on what the CCP does next in Hong Kong. Beijing's implementation of the National Security Law for Hong Kong has made the United States realize that [the promise of] 'one country, two systems' exists in name only. Actually, it's just one country, one system. That's why the United States has made policy adjustments in response to the changing political reality in Hong Kong, like abolishing the city's special status.

RFA: Doesn't that just make Hong Kong a victim being tussled over by China and the U.S.?

Miles Yu: No, I don't agree with that. The Hong Kong issue is a reflection of the confrontation between China and the rest of the world. The CCP made assurances to the rest of the world on Hong Kong, which is why the [1984] Sino-British Joint Declaration was registered at the United Nations. The CCP has now reneged on those promises it made to the world.

RFA: Could the next administration do more to help Hong Kong people? Some people in Hong Kong are worried about being abandoned by the United States.

Miles Yu: I don't think there is a partisan divide on the Hong Kong issue here in the U.S. A number of bills involving Hong Kong have been passed by Congress, while the President only signed the bills in response to public opinion. The views of the US executive and legislature on the Hong Kong issue are exactly the same. Hong Kong policy won't be changing one jot, no matter who is in the White House.

RFA: If one country, two systems is no more in Hong Kong, how will that affect U.S. policy on Taiwan?

Miles Yu: Hong Kong occupies an important position among U.S. decision-makers ... the U.S. used to treat Hong Kong differently from China because of its special history, and because of the promises China made to the world. Now, that commitment has been broken and Hong Kong's high degree of autonomy has gone, resulting in a fundamental reassessment of U.S. policy ... which impacts Taiwan policy too, as you mentioned.

This is because the CCP's [claim on] Taiwan is founded on the idea of one country, two systems. China was to a certain extent using Hong Kong as a model for [its intended rule over] Taiwan. Now that one country, two systems has completely failed, the first consideration for the United States’ Taiwan policy is that this idea must be re-evaluated. If it is an illusory promise, then the cornerstone of the CCP's Taiwan policy is no longer there. So of course there is a need to reconsider.

Taiwan is a model of democratic government and a shining example in the Chinese community internationally. The protection already extended [by the U.S.] to freedom and democracy in Taiwan is actually totally consistent with the U.S. foreign policy when it comes to nation-building.

RFA: So will the U.S. focus on protecting Taiwan’s democracy, regardless of who is in power?

Miles Yu: Yes, I think it will. Back in the 1970s, there were a lot of backroom deals in international policies, during which world leaders could hold secret negotiations to determine the fate of entire countries or regions, which would have a huge geopolitical impact. But that kind of diplomacy is no longer appropriate today. It is hard to imagine the leaders of the U.S. and China sitting down to hold secret talks on the future of Taiwan, because the future of Taiwan should be decided by its people. They already have a mechanism for the full expression of public opinion. There is no need to fear that the U.S. will use Taiwan as a bargaining chip to play global politics.

And Taiwan’s experience should not be underestimated. For example, Taiwan has made outstanding contributions to the global pandemic effort, and can teach the world many useful practices and policies. It has also made great contributions to social progress, turning an authoritarian country into a diverse and tolerant place. Taiwan’s democracy is not just the pride of Taiwan, but also the pride of Chinese communities everywhere. It proves that, in a Chinese community with a long cultural tradition, democracy and tradition aren't mutually exclusive.

RFA: You said that the Trump administration’s most important contribution to US-China relations has been to make the world understand the CCP. Is there a bipartisan consensus on that now in Washington?

Miles Yu: There's not a bipartisan consensus; there is a global consensus that has been forming gradually. And yet many people still don't realize that the Chinese Communist Party is a totalitarian regime, particularly with its use of new technology, which gives it even greater control. The novel 1984 was once regarded as a novel about the future, but China has exceeded [what is depicted in] it.

RFA: Do you think the U.S. and the international community have made major adjustments to their China policy?

Miles Yu: They have had to. For example, the Chinese government said that there wasn't a pandemic, but it didn't get to have the final say on that matter. The Trump administration brought fundamental changes in many of the most basic concepts. For example, we see the CCP as the number one global threat. We now regard China as the top foreign relations priority, so we have to formulate policies to deal with it. We have abandoned the prevailing concept that has guided China policy since the Nixon administration, namely, "seeking common ground while reserving differences." This sounds great but it's actually dangerous. The "differences" part refers to issues relating to political systems or ideology, so human rights, censorship, and propaganda can't be the main focus. [Now] we must use universal liberal and democratic values and the competitive advantages of the United States' political system to prevent China's ruling model from achieving international dominance.