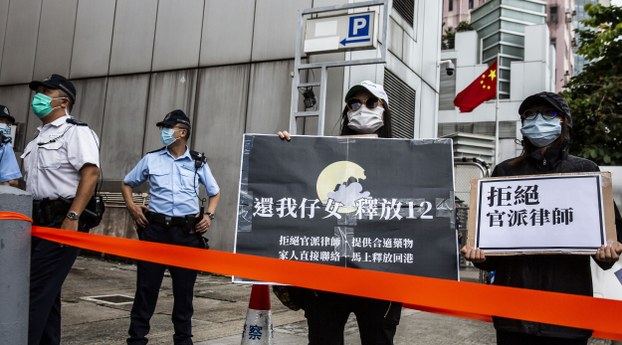 Family members of some of the 12 Hong Kong residents detained in mainland China after trying to flee to Taiwan protest outside China's Liaison Office in Hong Kong, Sept. 30, 2020.

As 12 Hong Kong activists face the traditional Mid-Autumn Festival of moon gazing and poetry behind bars in mainland China after they tried to flee to democratic Taiwan, their families are calling for the release of records that would show where their speedboat was when it was intercepted by the China Coast Guard.

Family members of some of the detainees brought traditional Mid-Autumn Festival mooncakes to the ruling Chinese Communist Party's Central Liaison Office in Hong Kong on Wednesday, asking officials to deliver them to their loved ones, who are currently being held in Shenzhen's Yantian Detention Center on suspicion of "illegally crossing a border."

The group -- accompanied by opposition lawmaker Eddie Chu -- chanted a slogan opposing the appointment of government-approved lawyers after the detainees were denied permission to meet with lawyers appointed by their families, as well as "Give us back our kids!"

The families also requested a meeting with Chief Secretary Matthew Cheung and Secretary for Security John Lee, and called on Hong Kong's Marine Department to provide radar records of the area around the Ninepin Islands on the day that the speedboat was intercepted.

They also chanted slogans calling for the immediate release of all 12 Hong Kong detainees, or at least for family visits to be allowed at the detention center.

Incommunicado detention is a known risk factor for torture and other forms of mistreatment in detention, and has been linked to several high-profile torture cases in mainland China in recent years.

The father of detainee Cheng Tsz-ho said the family is devastated that he can't be with them during this year's festival.

"We used to have meals and mooncakes together during the Mid-Autumn Festival," Cheng told RFA. "This year, my son is missing, and life is pretty miserable."

"My wife is sick ... and I have trouble sleeping at night," he said.

Cheng said Hong Kong has lost any of the traditional freedoms it once enjoyed, under a draconian National Security Law imposed by Beijing from July 1.

"Things feel more tense now than they did during the Japanese occupation," he said. "Nobody dares to speak out."

"I don't know whether I'll be down at the police station tonight, given what I've said today," he said. "There is no rule of law now."

The wife of a detainee surnamed Wong said she had bought a mooncake embossed with his favorite mythical figures.

"There was a small mooncake with my husband's two favorite figures on it, so I bought it," she said. "I hope that it will be delivered to my husband today through the Liaison Office of the Central People's Government in the Hong Kong Special Administrative Region."

"I hope we can have a family reunion in the Mid-Autumn Festival next year, which will not be possible this year," she said.

A mother of one detainee surnamed Lee hit out at the Hong Kong government for doing little to assist families and detainees, some of whom have been trying to get essential medicines delivered to the detainees, to no avail.

"They told us to stop arguing, that the medicine can't be delivered, and that's that," Lee said. "We have made it very clear that we want to appoint our own lawyers, and that we don't want government-appointed lawyers."

"According to the laws of mainland China, we should be allowed to hire our own lawyers there too," she said.

Hong Kong chief executive Carrie Lam and her senior officials have said they won’t interfere with law enforcement in another jurisdiction.

Nobody emerged from the Central Liaison Office to take delivery of the mooncakes, and police guarding the building eventually told the group to pose for photos then take them away again.

Mid-Autumn Festival, traditionally a harvest celebration, starts on the 15th day of the eighth lunar month, when the moon appears at its roundest and largest. It is marked in China on Thursday, and coincides this year with the Oct. 1 National Day celebration and the annual Golden Week holiday.

The families' protest comes after Hong Kong police turned down an application by march organizers the Civil Human Rights Front (CHRF) to hold a march in support of the 12 detainees on Thursday, citing a risk of "violence" and widespread transmission of coronavirus.

CHRF convenor Jimmy Sham has called on Hongkongers to wear black instead to register their protest over the incommunicado detention of 12 Hong Kong activists in a Shenzhen detention center after they tried to flee to the democratic island of Taiwan by speedboat.

None of the lawyers appointed by the families of the 12 activists, aged 16 to 33, has been allowed to meet with their clients.

Hong Kong police have arrested thousands of people in connection with protests that swept the city throughout most of last year, on charges that rights groups and overseas officials have said undermine the city's traditional freedoms of expression and association, guaranteed by China under the terms of the 1997 handover.

Hundreds more have been arrested since July 1, when the ruling Chinese Communist Party imposed a draconian national security law on Hong Kong outlawing words and deeds deemed by the authorities to constitute separatism, subversion or terrorism, or collusion with a foreign power.

In August, the United States announced sanctions against Hong Kong leader Carrie Lam and  senior Chinese and Hong Kong officials for their role in curbing the city's promised freedoms and in implementing the national security regime, which has seen China's feared state security police set up a headquarters in the city.