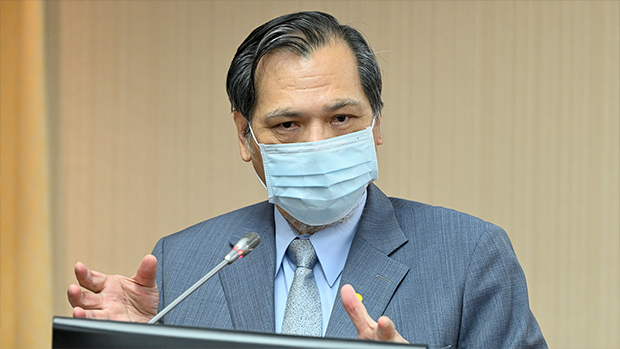 Chen Ming-tong, minister in charge of relations with China at Taiwan's Mainland Affairs Council, warns that China may increase pressure on Taiwan following the US presidential election, Nov. 9, 2020.
RFA

China remained mute on Monday as Joe Biden claimed victory in the U.S. presidential race, while the demcratic island of Taiwan joined key U.S. allies in offering its congratulations.

Taiwan President Tsai Ing-wen joined a number of other world leaders in tweeting her congratulations to President-elect Joe Biden and Vice President-elect Kamala Harris, who have won the more than 270 electoral college votes needed to claim victory in the 2020 U.S. Presidential Election.

"Now it is my turn to extend congratulations to @JoeBiden & @KamalaHarris on being elected President & VP-elect," Tsai wrote via her official Twitter account on Sunday.

"The values on which we have built our relationship could not be stronger. I look fwd to working together to further our friendship, & contributions to int’l society," Tsai wrote in a quote-tweet to Biden's congratulatory tweet on her re-election on Jan. 12.

"We look forward to working closely with the #US in deepening bilateral friendship & exchanges based on our shared values of freedom, democracy & respect for human rights," the ministry wrote.

China, however, held off on extending its congratulations, saying that the  outcome had not yet been confirmed.

"We understand that the U.S. presidential election result will be determined following U.S. law and procedures."

A time of strained ties

The reaction, which comes at a time of strained bilateral ties with Washington, contrasted with China's reaction in 2016, when ruling Chinese Communist Party (CCP) general secretary Xi Jinping sent congratulations to Trump just one day after the election.

"China hasn't congratulated Biden on his victory as quickly as Western countries did," Hu said via his Twitter account.

"I think it's because China needs to keep a larger distance from the US presidential election to avoid getting entangled in its controversy," he wrote.

Wu Qiang, a former politics lecturer at Beijing's Tsinghua University, said the CCP's silence indicates that a Trump presidency may actually suit Xi Jinping better than a Biden one.

"China has successfully used a superficial standoff with the U.S. ... to strengthen totalitarian rule by its leaders, to amend the constitution," Wu said. "Beijing wanted Trump to get re-elected, and they weren't prepared for a Biden victory."

Hong Kong pro-democracy campaigner Joshua Wong said Biden and Harris had largely been supportive of Hong Kong protesters, and had condemned a draconian national security law targeting peaceful dissent and criticism of the authorities when it was imposed on the city by the CCP from July 1.

But he warned the incoming administration not to underestimate Beijing's plan to wield total control over Hong Kong, which was promised the extension of its traditional freedoms until at least 2047, under the terms of the 1997 handover to Chinese rule.

"HKers hope the US administration can revise the worsening situation in HK and should not underestimate Beijing’s intention to tighten its grip," Wong wrote via his Twitter account.

"[Engagement] with China or dialogue may not be effective enough to hold China accountable over its human rights violations," Wong warned, in a reference to previous Democratic presidents' policy of engagement with the CCP.

"We hope the new administration understands the situation has changed dramatically in recent years, and it is impossible to turn back the clock," he added.

Taiwan's minister in charge of relations with China at the Mainland Affairs Council (MAC), Chen Ming-tong, warned that Beijing likely sees a Biden presidency as an opportunity to reassert control of the relationship with Washington and to step up pressure on Taiwan to "unify" with China.

"They will continue to put pressure on Taiwan and try to force us to accept their 'one China' political framework," Chen said. "For the CCP, the question of Taiwan is at the core of the relationship with Washington."

Taiwan has never been ruled by the CCP nor formed part of the People's Republic of China, but has been forced to the margins of international cooperation and diplomatic recognition by Beijing's insistent claim on its territory.

President Tsai has repeatedly refused to discuss "unification" with the CCP, saying the country's 23 million inhabitants have no wish to give up their democratic way of life, pointing to the breakdown in Hong Kong's freedoms and autonomy after the city was handed back to Beijing.

Chen said it was impossible to have a meaningful dialogue with a country that has refused to rule out a military invasion of Taiwan.

"They've been stepping up their United Front [influence] operations in Taiwan ... and they won't renounce the use of force," he said. "We have been very clear that we only want meaningful and respectful dialogue."

Reported by Chung Kuang-cheng for RFA's Cantonese Service, and by Gao Feng for the Mandarin Service. Translated and edited by Luisetta Mudie.