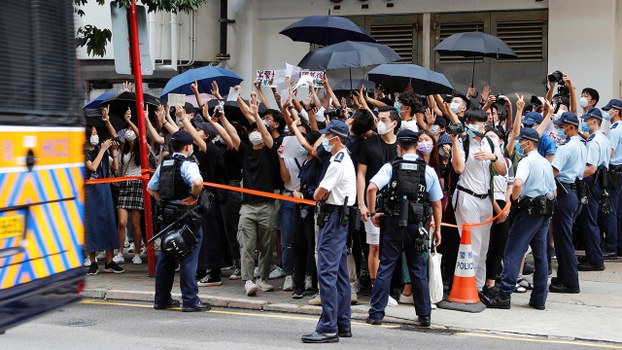 Hong Kong protesters call for democracy on the anniversary of a police crackdown in the city's Mong Kok district, Aug. 31, 2020.
Reuters

Thousands of people clad in black with white mourning flowers gathered on the streets of Hong Kong's Mong Kok district on Monday to mark the anniversary of an attack by riot police on passengers at Prince Edward MTR station at the height of last year's protest movement.

Police fired pepper balls and kettled the crowd of protesters, some of whom had projected the words "[Police] beat people to death on Aug. 31" on the side of the local police station, according to photos of the scene posted to Twitter by journalist Ryan Ho Kilpatrick.

"Pepper balls fired down Prince Edward Rd W after a medic is arrested and crowds yell," he tweeted, adding that riot police charged at the crowd soon afterwards.

Protesters left flowers outside Prince Edward MTR, to commemorate one or more people whom many believed died when riot police attacked unarmed train passengers on a train and on the subway platforms.

Police cleared away the flowers, then raised a purple flag warning that the gathering could be in breach of a sweeping national security law that bans any criticism of the Hong Kong or Chinese authorities, government broadcaster RTHK reported.

While many left the scene at that point, others remained, with shouts of "Independence for Hong Kong!" heard at the scene, the report said.

Some protesters called on the authorities to meet the five demands of the protest movement for greater democracy, an end to police violence and the official description of protesters as "rioters," as well as an amnesty for thousands of people arrested during protests.

Authorities in Hong Kong have repeatedly hit out at 'malicious rumors' that someone died when riot police stormed the Prince Edward MTR station on Aug. 31, but the selective release of stills from surveillance footage from cameras inside the station has done little to assuage public mistrust in the official narrative.

Eyewitness Wong Mau-tsun, who was originally rumored to have been killed in the attack, told RFA that he was taken to hospital in a conscious state after being beaten by riot police inside the station.

"A lot of SWAT police rushed in suddenly, and suddenly the area in front of the escalators was full of riot police," Wong told RFA. "We all hung back, but they chased us, shoved us to the ground, and arrested us."

"I remember very clearly that they were beating people up indiscriminately that night," he said. "When they charged us, they attacked everyone, without any regard to their circumstances."


Wong said he was later shocked to learn that he was counted among the "missing" in the wake of the raid, but didn't speak out publicly for fear of affecting his case, as he had already been charged with public order offenses.

"I know everyone is very focused on whether or not anyone died on Aug. 31, but I think the problem stems from the total lack of checks and balances on police power in Hong Kong," he said. “Their law enforcement is far beyond what they need to deal with ordinary civilians."

Former student leader Kex Leung has repeatedly tried to access video footage from the night of the raid on Prince Edward MTR, but has been left dissatisfied with the authorities' response.

"Some of the still shots released by the MTR Corp. don't add up to me, in terms of the marrying of time and place," Leung said.

"I have seen a lot of events that took place that night, but I am pursuing a private prosecution, and I can't make them public," he said.

"I hope they will one day make all of the footage publicly available."

Earlier in the day, more than 100 people gathered on different floors in Mong Kok's New Century Plaza and Langham Place shopping malls, many of them dressed in black and chanting protest slogans, including calls for independence.

Police officers entered the malls after broadcasting a warning at 6.00 p.m. to disperse the crowds and cordoned off the area, issuing on-the-spot fines to some people for alleged violations of coronavirus restrictions on public gatherings.

Dozens of uniformed police officers had gathered on Mong Kok's Nathan Road since noon, and were stopping and searching passers-by.

"Protesters gathered and chanted slogans on Nathan Road, Prince Edward," the police said in a statement on the government's official website. "Police at scene have repeatedly warned participants to stop gathering and leave."

"Police are now stepping up patrols and conducting stop-and-searches on suspicious persons in order to prevent and stop crime," the statement said. "Police call upon members of the public to refrain from taking part in unauthorised assemblies and prohibited group gatherings."

The renewed protests came as a public opinion poll found that a growing majority of people in Hong Kong support the pro-democracy movement’s goals, while around 44 percent support the protest movement.

The survey by the independent Public Opinion Research Institute (PORI) is the first since Beijing imposed the National Security Law for Hong Kong on the city on July 1, bypassing the city's Legislative Council (LegCo).

It found nearly 60 percent of people were opposed to the security law, up from about 57 percent in June, when few details of the legislation had been made public.

Hong Kong Chief Executive Carrie Lam’s office and China’s Hong Kong and Macau Affairs Office, which comes under the State Council, or cabinet, did not respond to requests for comment about the results of the survey, Reuters reported on Monday.

It said the Hong Kong Police Force did not respond to a request to comment on the impact of national security law arrests on public opinion.

Reported by Gigi Lee and Tseng Yat-yiu for RFA's Cantonese and Mandarin Services. Translated and edited by Luisetta Mudie.