A blogger who has called for protection of the Tibetan language says Chinese authorities are responsible.
2010-11-23
Tweet 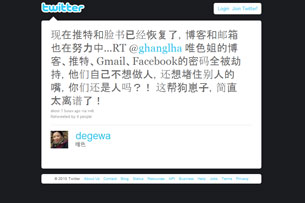 The blog and personal online accounts of a prominent Tibetan writer have been attacked by unknown hackers, according to her personal microblog updates.

"A friend called me at about 9:00 a.m. and told me that they couldn't get onto my blog," Woeser said.

"We couldn't find it ... I am pretty sure it's certain Chinese [government] people who did this."

She said her access to Twitter, where she is known by the username @Degewa, and Facebook was also temporarily hijacked, but later regained with the help of online friends and supporters.

"Now I am back into Twitter and Facebook, but they are still working on my e-mail account and my blog," wrote Woeser, who is currently visiting relatives in the Tibetan capital, Lhasa, where she has been under tight surveillance by police.

Earlier, user @lixinzhao tweeted: "Good news. With the help of the techie grass-mud horses, Ms. Woeser has managed to win back control of her hijacked Twitter account, which was taken by the enemy."

"However, her blog and Gmail account are still in enemy hands, and the comrades are still working on them," @lixinzhao said.

"Grass-mud horses" is a satirical distortion of a common Chinese expletive, and refers to online activists who support more freedom on the Internet.

In online parlance, the enemies of the "grass-mud horses" are the "river crabs," a nickname for those who curb or attack online freedom on the government's behalf, as well as a pun satirizing Chinese leaders' call for social "harmony."

In a recent essay in support of Tibetan demonstrations by students wanting to be taught in Tibetan, Woeser called for the freedom to speak one's own language as a fundamental human right.

"Those kids in their school uniforms took to the streets and shouted, 'We Need Classes in Tibetan,' a sad and emotional scene, which directly penetrated the lies invented by the authorities," she wrote in the commentary, which was later posted on her blog.

The attack on Woeser's online accounts comes just days after allegations made in a report to the U.S. Congress that 15 percent of global Internet traffic, including some from U.S. military sites, was wrongly redirected to China.

Traffic from .gov and .mil websites was affected by the 18-minute-long April 8 redirection, including traffic from the Senate, all four military services, the office of the secretary of defense, and the National Aeronautics and Space Administration (NASA).

Internet giant Google announced at the beginning of this year that it would pull out of China after its email infrastructure was targeted by cyberattacks originating from a server inside China.

Google said in a January blog post that many of the email accounts targeted as a result of the attack belonged to Chinese dissidents and pro-democracy activists.

And in March 2009, the Canada-based Munk School of Global Affairs revealed what it described as a vast network of cyber-espionage, encompassing traffic from banks, embassies, foreign ministries, and other government departments in 103 countries and across more than 1,000 government and personal computers.

The network, nicknamed GhostNet, was traced to four servers, three of which were based in China, and appeared to have targeted exiled Tibetan groups in particular.

"We have already had more than one incident that threatens global Internet security which bear the imprint of the Chinese government," wrote Xiao Qiang, adjunct professor at the Graduate School of Journalism at the University of California at Berkeley, in a recent commentary on cyberattacks.

"If China Telecom can't give a credible explanation for the redirection of Web traffic, then it will have proved by omission the existence of intentional controls over Internet traffic," he said.

Chinese authorities have long kept a tight rein on media that report stories of dissent or protest against government actions, but now private companies and powerful individuals are beginning to add pressure as well.

Woeser: Her Life in Pictures

Photos trace the Tibetan writer Woeser's life from girlhood to the present day.