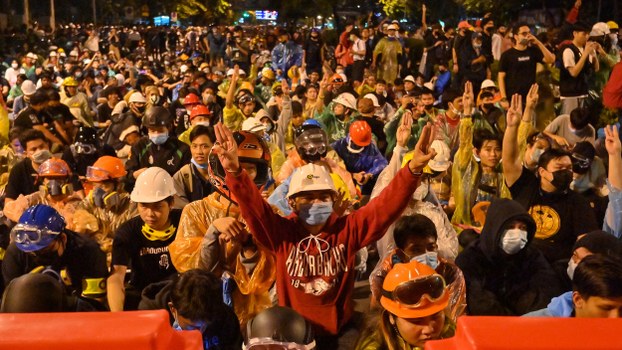 Pro-democracy protesters give the three-finger salute during an anti-government rally in Bangkok, Oct 21, 2020.

Days of demonstrations in Thailand, where protesters are calling for regime change, have inspired a rare outpouring of frustration with the government by netizens in neighboring Laos, where criticism of the one-party Communist state is strictly forbidden and punishable with hefty prison terms.

Thai Prime Minister Prayut Chan-o-cha on Thursday ended an emergency decree banning public gatherings of more than five people after demonstrators defied the order and held daily protests in the streets for more than a week, calling for a new constitution and limits to King Vajiralongkorn’s power.

Prayut, the leader of the country’s 2014 coup who has also faced calls to step down, said a day earlier during a pre-recorded, televised speech that he was taking steps to “de-escalate” tensions and called on protesters to air their grievances through the country’s parliament. Activists have dismissed the prime minister’s efforts at reconciliation and given him a three-day deadline to resign.

Lao citizens monitoring Thai social media have expressed solidarity with the protesters in Bangkok and on Oct. 20 launched the hashtag campaign “if Lao politics was good” on Twitter, taking the rare step of pointing out misgovernance in their own country, where those who post messages complaining about the state’s failure to address graft, poverty, and other social problems are routinely locked up.

“In Laos our government [is] trying to blame us that we have someone … call for democracy too,” one user named “emergen” tweeted in English. “If Lao politics is good, why we need [to do] this? Do not underestimate the wisdom of Lao youth, we [know] everything, but we can’t say it out [loud].”

“Protests in Thailand has sparked a lot of young gen in Laos to voice their opinion on this tag #ຖ້າການເມືອງລາວດີ (if Lao politics was good) and the gov. kindly reminded us that we can’t do that or we’ll end up in jail, or worse; death sentence,” another user named “zero” tweeted.

“(if Lao Politics was good) we’d have freedom of speech and wouldn’t have to hide behind [an] anonymous online profile,” the user noted in another tweet.

User “GrumpyG” tweeted that netizens posting under the hashtag are “fighting for real democracy in Laos.”

“We’re fighting for our new generation’s future and I truly hope that the Government will listen to our voices.”

Prominent Thai student activist Netiwit Chotiphatphaisal tweeted using the hashtag, saying he was happy to see that Laotians had been inspired to “criticize the social problems and undemocratic regime of their country after seeing Thai protests.”

By Friday, hundreds of thousands of tweets had been posted under “if Lao politics was good,” including rants about the misuse of taxes, high rates of illiteracy because of underfunded schools while the political elite send their children abroad to study, devastation of the country’s natural resources, and frustration over the yawning wealth gap. 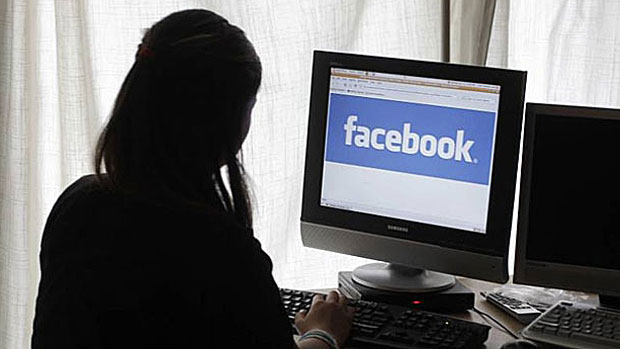 A Lao woman reads Facebook on her computer in an undated photo. Photo provided by a citizen journalist

The hashtag campaign drew detractors, including Facebook user “Lao patriotism,” who accused the movement of being made up of Twitter users who “almost [all] are abroad” and comprised of an “anti-government group trying to create unrest.”

Facebook user Vongvichit Poti Lars responded to the hashtag by cautioning against comparing Laos with Thailand.

But Laotians inside Laos welcomed the movement in comments they made to RFA’s Lao Service, saying the public should have the right to express their concerns, even if it doesn’t lead to regime change.

“The Thai protest provides us lessons on democracy and freedom of speech that civilized nations enjoy,” said one resident of Laos, speaking on condition of anonymity for fear of reprisal. “Lao people should be able to participate in decisions of national development.”

Another citizen, who also declined to be named, said Laotians had seen from Thailand that “leaders suppress their people in many forms,” which had prompted feelings of sympathy in Laos.

“Laos must slowly change and open to the world because it cannot be against the globalization and isolate itself,” he said.

The hashtag campaign even elicited an expression of support from an official with the Lao Ministry of Information, Culture, and Tourism, who acknowledged that anyone in Laos who dares to express liberal opinions in a public forum will be accused of defaming the government, often leading to their arrest or enforced disappearance.

“I agree with the hashtag messages because they are true,” he said.

“But in Laos, only a single party dictates the direction of the country, so I find it hard to believe students would protest here like in Thailand … Laos has absolutely no democracy. If Laos had democracy, it would not be what it is today.”

Vanida S. Thephsouvanh, chairwoman of Paris-based Lao Movement for Human Rights, told RFA that as protests continue in Thailand, Lao democrats inside the country, as well as state officials, are watching to see how things will play out.

“It will surely give them things to think about, act on, and react to,” she said. “I suppose that both the people and the leaders in Laos are watching to see what will happen before doing or saying anything.” 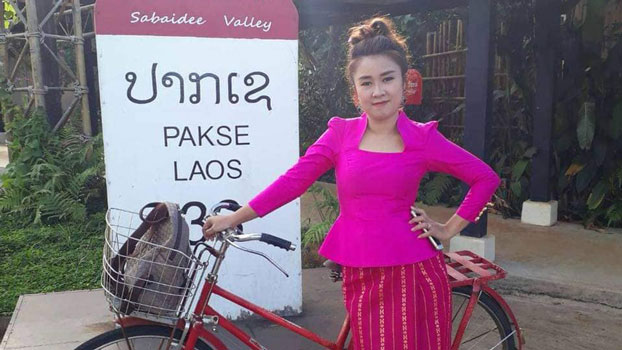 According to statistics compiled by www.laoconnection.com, there were more than 3 million social media users in Laos in early 2020, accounting for around 40 percent of the population.

In a series of RFA interviews in August for the 70th Lao Media and Publication Day, Lao citizens said they shunned Lao state media to get their news on YouTube, Facebook and television from next-door Thailand, with one resident of the capital saying state media were “slow and not up to date.”

Ruled by the Lao People’s Revolutionary Party (LPRP) since 1975, Lao’s government brooks no opposition in any form and locks up citizens who post popular gripes and mild criticism on Facebook about corruption and mismanagement.

In 2014, the Lao government issued a decree prohibiting online criticism of the government and the LPRP, setting out stiff penalties for netizens and internet service providers who violate government controls.

According to a recent report in the Vientiane Times, persons causing “loss or damage” through social media are subject to a prison sentence of between three months and three years, as well as a fine of between 4 million and 20 million kip (U.S. $430 and $2,165), according to Article 62 of the country’s penal code.

In November, a 30-year-old woman named Houayheuang Xayabouly was jailed for five years for defaming the country in complaints about the government response to floods in a Facebook Live video. “If Lao politics was good” tweets have also called for her release.

Lao activist Sangkhane Phachanthavong who was detained in late August for writing about government corruption on Facebook, was granted a rare release on bail after more than a month in jail, but still faces charges surrounding alleged links to “an anti-government group of overseas Laotians.”

Reporters Without Borders reported this year that Laos was ranked 172ndout of 180 countries in terms of press freedom.

Washington-based Freedom House classified Laos as “not free” with a global freedom score of 14 out of 100 in its 2020 Freedom of the World survey. The Southeast Asian country scored 2 out of 40 in political rights, and 12 out of 60 in civil liberties.

Reported and translated by Ounkeo Souksavanh for RFA’s Lao Service. Written in English by Joshua Lipes.

Yes, Thailand, Laos, and Cambodia are very similar. They share language, culture, history. Very similar people. They should band together and fight for justice and freedoms from oppression. China is very much aggressive towards them so the people can unite and push back against China. Their culture, language, and history are from neighboring India. Together the four(India, Thailand, Laos, Cambodia) of them can help each other against China.