Tibetan Students Fight for their Language

The Tibetan poet Woeser, under close surveillance in Lhasa, expresses her fears for Tibetan students protesting Chinese education reforms that aim to slowly eradicate Tibetan language a a medium of instruction in their schools.
By Woeser
2010-12-02
Tweet 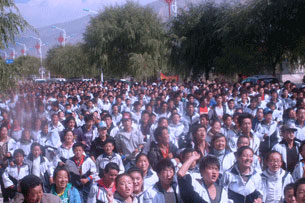 Since October 10, thousands of Tibetan middle and primary school pupils from four different autonomous Tibetan prefectures of Qinghai Province have been taking to the streets to demonstrate. In Beijing at the Minzu University of China, several hundred students gathered on campus. They all had one simple goal: to speak up for the Tibetan language. The situation is similar to that in August this year, when thousands of Cantonese came together in Guangzhou to fight for the Cantonese language. Both events were equal in nature, both were striving for the rights of their own language in this big unified country. The only difference is that Cantonese is a Han language, whereas Tibetan is the language of an ethnic minority. Yet, no matter whether one fights for Tibetan or for Cantonese, since it all happens in response to the same power and in the exact same circumstances, all those who decide to express their wishes publicly should be treated in the same way.

The Cantonese, who, in view of their language being marginalised, dared to say “I am willing to speak Mandarin but don’t force me to speak Mandarin!” remind us of the reality of the even more endangered Tibetan language in the Tibetan region. Yet, if we Tibetans speak of this publicly, we are immediately being framed as “splittists” or “Tibetan separatists”. I have previously written an article, "If Tibetans Took To The Streets For The Tibetan Language", which was not only about the differential treatment of Han Chinese and “ethnic minorities” when faced with exactly the same problem, it was even more about pointing out that “ethnic minorities” such as Tibetans, Mongolians, or Uyghurs are likely to be exposed to even more unfair and unjust treatments. But it should only be fair to argue that if the Cantonese behaviour gained public response, support, and understanding, so Tibetans fighting for the Tibetan language should also gain public response, support and understanding, otherwise isn’t this unconcealed ethnic discrimination?

Of course, placing the recent attempts of Tibetans fighting for their language on a par with the Cantonese case stems from some kind of deep apprehension. Let’s be honest, we are afraid that those children, teenagers and adolescents trying to fight for the ignoble existence of their innate but scarred mother tongue, will be suppressed, one by one, by those in power adopting their usual arbitrary and boorish methods, resulting in the buds of life of those young people being nipped before they have even blossomed. In fact, the slogans, which they advocate, asking for common values of “ethnic equality and freedom of language”, should be regarded as the most fundamental human rights and are by no means unreasonable requests. Those kids in their school uniforms took to the streets and shouted, “We Need Classes in Tibetan”, a sad and emotional scene, which directly penetrated the lies invented by the authorities. It also made people shed tears of misery and even though the government shows no compassion, they should at least show some mercy. For example, they punished two Tibetan high school students from Machu for participating in a demonstration asking to release Tibetans who had been arrested two years ago; this must stop!!!

In fact, the circumstances that triggered this year’s fight for the Tibetan language are a great deal more complicated than the Cantonese case. It is not only simple fact that the authorities are pushing for cultural homogenisation and shear all tongues that do not speak Mandarin. The policies initiated by Qinghai Province as part of the education reform have an experimental character and are a little bit like the “patriotic education” advocated in Lhasa’s monasteries ten years ago, which today have already infiltrated all monasteries in all of Tibet. These new policies, first being implemented in 6 autonomous prefectures of the Qinghai Province (whose Tibetan education has so far actually presented quite good results) aim to turn all secondary and primary “minzu” schools as well as common schools into “Han Schools”, promoting the idea of “Mandarin comes first, Tibetan comes second, establishing Mandarin as the main language of teaching and the first language to be learnt”.  This education reform is envisaged to come into effect in the entire Tibetan region, speeding up the process of all monks and lay people in the Tibetan region becoming more Han and being sinicised from a young age; to become part of mainstream society, as the government would say.

Another reason is directly linked to the protests that swept across the whole of Tibet in 2008. At the time, many pupils from Tibetan primary and secondary schools participated in the protests, a fact that the local authorities most definitely regarded as a thorny issue, which needed to be resolved. At the end of April last year, several hundred Tibetan primary and secondary children of Labrang County skipped classes and took to the streets to show their dissatisfaction that their schools criticised His Holiness the Dalai Lama, also appealing to the authorities to put a halt to “college entrance exam immigration”. Afterwards, the Gannan County Committee Secretary, Chen Jianhua, gave the students a severe warning in a meeting: “What is the point in learning Tibetan? Knowing Tibetan, will you ever walk through Tumain Gate (the border of Gannan and Linxia Counties)? What kind of people do Tibetan schools produce? Are they producing the new socialist generation or class enemies?” In line with this, in the outline of the Qinghai education reform, the reform is regarded as “an important political responsibility”. As we see from this, after reviewing the protests in 2008, the government came to the conclusion that it is all or nothing; one might as well completely destroy Tibetan language education, stamp out the source of trouble and settle the matter once and for all.

The Tibetan poet Woeser wrote this essay in Tibet for Radio Free Asia. It was translated into English and published by www.highpeakspureearth.com on October 28, 2010