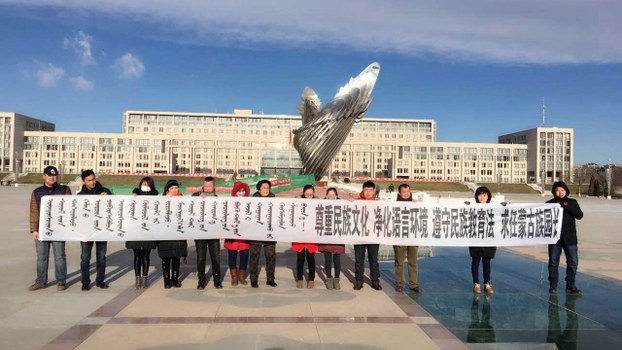 Ethnic Mongolian parents hold banners calling for their children's education in their own language in China's Inner Mongolia in an undated photo.
Screen grab from video

The ruling Chinese Communist Party has suspended two county-level officials in its northern region of Inner Mongolia for failing to implement its directives amid a region-wide schools boycott and widespread protests against plans to phase out Mongolian-medium education.

The party's Central Commission for Discipline Inspection (CCDI) imposed the penalty on two section-level leading cadres in Zhenglan Banner -- a county-level division, according to a Sept. 5 report on the banner government's official Shangdu news website.

They were accused of "failing to implement" directives from the ruling party's Central Committee in Beijing, indicating that the order to make sweeping changes to Mongolian-medium education in the region came all the way from the top.

The Communist Party committee of Bairin Right Banner -- a county-level division -- also warned recently that civil servants and public employees must send their children back to schools on Monday, or face suspension without pay from Sept. 8 pending expulsion hearings.

The announcements came as hundreds of ethnic Mongolians were arrested or forced to resign from public office after they resisted the changes to the curriculum, which were kept under wraps until the start of the new semester at the end of August.

The New York-based Southern Mongolian Human Rights Information Center (SMHRIC) has estimated that some 300,000 students have boycotted class across Inner Mongolia in protest at the policy, which will see Chinese used as the language of instruction for classes in math, physics, chemistry, and political and physical education in schools that previously offered Mongolian-medium education.

The authorities are saying the move is towards "bilingual education," but ethnic Mongolians say it is a form of cultural genocide aimed at cutting off their remaining connection to their culture and heritage.

U.S.-based ethnic Mongolian activist Nomin said the authorities have also put pressure on other high-schoolers to drive out to rural areas and persuade families there to send their children back to school.

"They are organizing teachers everywhere, and each teacher has to recruit 5-10 students to persuade other students," Nomin said. "They are using this method in all locations."

"There has been a steady stream of [students] driving out to rural areas ... to carry out their political duty," he said. "Anyone opposing 'bilingual education' is regarded as opposing the government, and therefore subversive."

“The ethnic Mongolians who gathered in large cities such as Hohhot are largely public servants, so the government has been using various ... means like intimidation over the past few days to put pressure on them," Khubis said.

He said the intense pressure had forced some parents to send their children to school on Monday, although farmers and herding communities were still upholding the boycott.

"In the countryside, the herders still aren't sending their kids to school," he said. "In Ar-Horchin Banner and Chifeng city, hardly any parents were sending their children to school -- until now."

Nomin said hundreds of people have been arrested across the region as a result of the civil disobedience and protest movement.

"They have arrested more than 100 people in Tongliao city, and also in Ordos city," Nomin said.

He said among the arrestees were Urabagen of Ar-Horchin Banner and Tungger, who organized a petition against the language policy that garnered more than 300 signatures among employees of state broadcaster Radio Inner Mongolia.

Meanwhile, police in Linhe district of Bayanuur city announced they had detained four people for "opposing and preventing" the implementation of the language policy, citing posts on the social media platform WeChat.

They were accused in the statement of "publishing false information and making false statement," as well as colluding with class boycotts and inciting illegal gatherings.

They were being held under "coercive measures," a term that often indicates house arrests, on public order charges, the statement said.

"The government doesn't trust its ethnic Mongolian civil servants, and calls them 'two-faced'," Nomin said, citing the recent resignations of an ethnic Mongolian police captain in Ortog Banner, and his wife, a kindergarten principal in protest at the new policy in schools.

School principals had also reportedly resigned in Ordos and Abag Banner of Shilin-Gol League, near the border with the independent country of Mongolia, he said.

Police in Naiman Banner and Horchin Left Middle Banner said they had detained 17 ethnic Mongolians for "forwarding false and harmful information" relating to the new language policy in schools, "creating and spreading rumors," and "maliciously obstructing" students from attending class.

"In the past few days, many local police departments have issued notices of wanted suspects, numbering hundreds of people," Arichaa said.

People are also being held under administrative detention for 10 days just for adding a popular signature to their WeChat accounts supporting the protest movement, Arichaa said.

She said one woman, Yang Jin, and her husband had been incommunicado in Shilin-Gol League for more than a week.

The Global Times newspaper, which has close links with Communist Party official newspaper the People's Daily, said the changes to the curriculum didn't mean that Mongolian would be phased out of the curriculum entirely.

It cited authorities in Shilin-Gol League as saying that the changes to the medium of instruction in some subjects didn't mean the end of preferable policies aimed at helping ethnic minority students get into college.

"The Inner Mongolia government ... released new education regulations last month saying that students entering grade one in ethnic primary and middle schools, will use unified national textbooks for Chinese language and literature and the course would be taught in [Chinese]," the paper reported.

In the past students started taking the course in the second grade. Mongolian language remains the medium of instruction in other subjects from the first grade.

"The new regulation on bringing courses taught in Putonghua has not been fully explained to parents, and disinformation has misled the public," the paper said in a report on Monday.

It said China's National Textbook Committee recently compiled standard textbooks in Chinese language and literature, politics and history for use in all primary and secondary schools nationwide since 2017.