China Has Mixed Reactions to News of Trump's COVID-19 Status 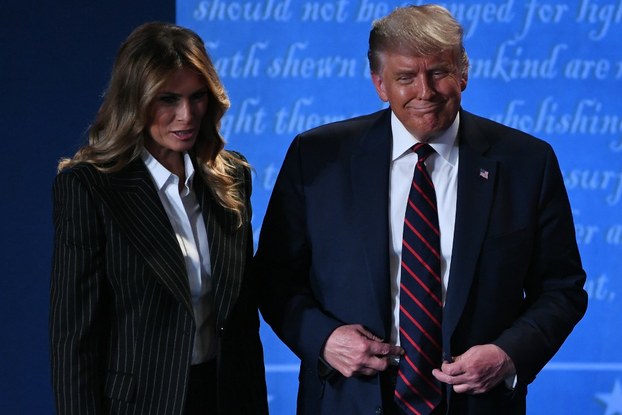 State news agency Xinhua issued a full-length news report based mostly on tweets from the first couple, while ruling Chinese Communist Party mouthpiece the People's Daily issued a two-paragraph news brief with a link on its front page.

China said it hoped the Trumps would soon recover after testing positive for the coronavirus, a foreign ministry spokesperson told Reuters.

"President Trump and the first lady have paid the price for his gamble to play down the COVID-19," Hu tweeted. "The news shows the severity of the US’ pandemic situation."

"It will impose a negative impact on the image of Trump and the US, and may also negatively affect his reelection," wrote the editor of the nationalistic tabloid affiliated with the People's Daily.

"[Trump] himself has long refused to wear a mask and was insufficiently protected," Hu wrote. "It may be that, under the U.S. system, politicians don't have much choice, but the negative impact is clear to see."

"The United States should find a way to make everyone safer," he wrote.

Huang Xiaomin, a rights activist based in the southwestern Chinese province of Sichuan, said the news had polarized ordinary Chinese people.

"This news really came as a shock [to many]," Huang told RFA. "It has split a lot of Chinese people into two fairly polarized camps."

"Less privileged ordinary folk are pretty sympathetic, because they don't like to hear about [misfortune] happening to anyone," he said. "They didn't want to see this."

He said most are aware that the news comes as the U.S. enters the final stages of the U.S. presidential election race.

"But there is another group in China who are gloating over [the Trumps'] misfortune," he said. "They are thinking that this bodes well for the future of both China and the U.S."

Social media comments viewed by RFA on Friday appeared to contain a majority of well-wishing messages, with some gloaters.

An entrepreneur from the southern city of Guangzhou who gave only a surname Zeng said many are concerned about the impact on the election, and on the Sino-U.S. trade war.

"I think people may be more concerned about the effect this will have on the outcome of the election," Zeng said. "They are wondering about the impact on Sino-US relations and on trade policy further down the line."

Why are no Chinese leaders infected?

A Xiamen-based commentator who gave only a surname Lin said there are plenty of people in China who admire Trump.

"There are many people in mainland China who like Trump, especially those with democratic ideas," Lin said. "I am sad that this has happened."

"I didn't like him very much at the beginning, but actually he has brought new ways of understanding [China] to the global political arena," he said.

"He pays no attention to high-sounding words, and is more focused on the goals that he wants to achieve," Lin said.

Independent scholar Zhang Tongzu said it was interesting to note that while coronavirus infections had been common among world leaders outside China, none had yet been reported among the Communist Party's political elite.

"Why do you think it is that presidents, prime ministers and some ministers have been infected with COVID-19, but nobody at provincial or ministerial level and above has in China?"

"Does that mean the Chinese are better protected?"

Ignoring or downplaying the views of top scientists and medical experts in WHO and other scientific organizations can come back to bite you. With respect to Covid-19, white nationalist politicians like Brazil's Bolsanero and the US's Trump have had to find this out the hard way. Whether either of them will develop more respect for science and evidence-based reasoning is doubtful, though, given these men's poor track record in facing facts.