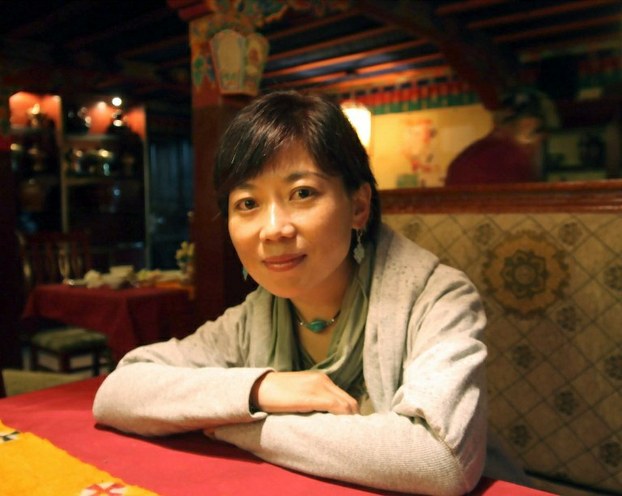 Chinese authorities have further tightened restrictions on Beijing-based Tibetan poet and blogger Tsering Woeser, moving police guards to the floor of her apartment building a day ahead of a State Department ceremony honoring her for her courage in striving to uphold Tibetan rights.

Beijing has blocked Woeser from traveling to Washington to receive the award, which she has dedicated to the more than 100 Tibetans who have self-immolated in protest against Beijing’s rule in Tibetan-populated areas.

Woeser said she and her husband have been placed under 20 days of house arrest at their Beijing home while meetings of China’s National People’s Congress, the country’s rubber-stamp parliament, are in session.

Restrictions on her movements, already strict, have now been tightened, Woeser told RFA’s Tibetan Service by phone on Thursday.

“Today at around 7:00 p.m. [local time], I saw that two security officers were stationed at the door to the elevator of my apartment building,” Woeser said.

“They look friendly, but my movements are now even more restricted than before,” she said.

“They suspect that the U.S. Embassy might organize an event [for me], and that if that happens there could be media people present. So I was told that I cannot go out.”

“If these restrictions last for just a few days, I can cope, but it will be difficult for me if they go on for 20 days,” Woeser said, adding, “If they block my Internet and website, that will be a real problem for me.”

A total of 107 Tibetans have set themselves on fire so far in protests challenging Beijing’s rule in Tibetan areas and calling for the return of the Dalai Lama, Tibet’s spiritual leader, who lives in exile in India.

Woeser has said that the self-immolations have given her the courage to continue with her own struggle for Tibetan freedom.

Woeser “has emerged as the most prominent mainland activist speaking out publicly about human rights conditions” for Tibetans, the State Department said this week in a statement.

Her website Invisible Tibet, together with her poetry and nonfiction and writings on social media have given voice to millions of Tibetans “who are prevented from expressing themselves to the outside world due to government efforts to curtail the flow of information,” the State Department said.

Woeser has violated no laws yet she is under house arrrest & prevented from leaving the country. This shows the CCP does not respect the rule of law or the PRC Constitution or the rights of citizens. I'm glad she won an award in the USA. Shame on the PRC for preventing Woeser from traveling to DC to accept her award.