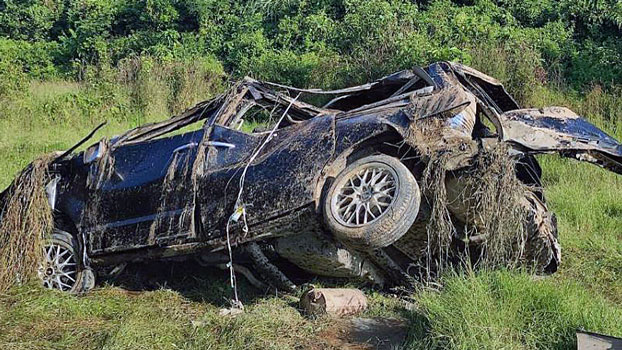 The wreckage of a car blown up by a landmine sits on the side of a road in Maungdaw township, western Myanmar's Rakhine state, Nov. 17, 2020.
Photo courtesy of Myanmar Military Information Committee

Three civilians, including a toddler, were killed when their car hit a landmine in western Myanmar’s Rakhine state, an incident that punctuated a rare period of quiet in the two-year-old war between government troops and the rebel Arakan Army that has raised hopes of peace.

Nine members of an extended family from a village in Maungdaw township were traveling home from a Buddhist alms-giving ceremony when their vehicle hit the mine. Kyaw Ye Aung, 25, his wife Aye Sann Nu, 20, and their son Kyaw Hsan Oo, 3 were killed, while four severely injured family members were taken to a hospital in the state capital Sittwe on Wednesday.

The car that hit the landmine was one of three returning from the ceremony, said Ma Win Thar, the older sister of injured passenger Saw Yin.

“Their vehicle passed two other cars,” she said. “Then, we heard the blast. It was like a big tree had fallen to the ground. Their car was blown away by the blast.”

The Myanmar military blamed the Arakan Rohingya Salvation Army (ARSA), a group that has been designated a terrorist organization for planting the landmines.

The Muslim militant group carried out deadly attacks on police outposts in northern Rakhine state in 2016 and 2017 that sparked violent military-led crackdowns on Rohingya communities, together driving about 830,000 members of the minority group out of the country and into Bangladesh.

RFA could not reach ARSA for comment. The shadowy group is not known to be actively fighting government security forces in Myanmar since other attacks on border guard stations in northern Rakhine state in 2019.

The deadly blast came as daily fighting between the AA and Myanmar troops stopped temporarily for the first time in the aftermath of general elections held on Nov. 8, local aid groups, residents, and lawmakers said Wednesday.

The break came after the AA issued a statement on Nov. 12 requesting that “by-elections” be held in parts of Rakhine where voting had been cancelled as a security precaution. The ethnic army also said it was extending a unilateral cease-fire until the end of the year so the elections could take place.

The same day, the Myanmar military issued a statement welcoming the AA’s appeal to election officials to hold the balloting by end of the year.

A ‘ray of hope’ for peace

Fighting between the Myanmar military and the AA, a mostly ethnic Rakhine rebel force that seeks greater autonomy for its people in the state, has killed 308 civilians and displaced nearly 226,000 civilians, according to tallies by RFA and a local relief organization.

The two forces last clashed on Nov. 10, when six civilians, including four children, were critically injured by an artillery blast in Ann township.

Ann Thar Gyi, a member of a humanitarian group helping civilians displaced by the war, said he hoped the pause in fighting would usher in a period of peace.

“Since then, we haven’t heard any news about armed conflicts in Minbya, Mrauk-U, or Kyauktaw [townships],” he said. “We pray and hope that this will be the ray of hope for long-lasting peace.”

“There had been armed combat in Rakhine state almost on a daily basis. …Now, we have seen the AA and the military compromise on something,” he said. “We see this as very promising for peace.”

Kyaw Zin, a resident of Pan Myaung village in Minbya township, said the pause in hostilities is a positive development that sets the stage for elections to be held in the state.

“It is a good time to hold the elections that we missed,” he said. “Otherwise, we will be without any civil administrations.”

“We are also glad that the military endorsed the appeal made by the AA,” he said. “I think the battles will cease for a longer time if we can hold the elections in the region.”

Myo Lwin, a resident of Ann town, who is helping civilians injured in the armed conflict, agreed that the latest development was a good sign for possible peace.

“When both combatants compromised on holding the elections, I concluded that it would expand the political sphere and lessen the chances of armed conflict,” he said.

But Myo Lwin pointed out that military troops are still present in and mobilizing on the ground in war zones, while locals continue to flee their homes.

Myanmar soldiers also are still searching for civilians whom they believe may have connections to the AA, he said, though on Nov. 14, the military released nearly 150 villagers it had detained earlier in Zaing Chaung village in Kyaukphyu township.

Phoe San, a Rakhine state parliament lawmaker from Kyaukphyu township, said state officials and legislators had discussions with the state security and border affairs minister and military officers about halting the fighting.

“So far, the armed combat has stopped completely,” he said.

Tun Thar Sein, a Rakhine state lawmaker from Mrauk-U township, said that fighting has come to a standstill in his township as well as in Minbya, Kyauktaw, and Ponnagyun townships.

But he warned that the armed conflict would resume if the government did not arrange for elections to be held.

“If the government acts to implement these appeals, it could be beginning of national reconciliation and peace, [but] if the government fails to do so, the armed conflict will resume and intensify,” he said. “It would bring more trouble for civilians.”

AA spokesman Khine Thukha told RFA that the cessation of military engagements is a good start for possible political negotiations.

“Ending the gunfire could mean the beginning of a new setup for the future with political negotiations,” he said. “Primarily, it is important to build trust between the parties by sustaining the cease-fire.”

Zaw Min Tun told RFA on Nov. 12 that the armed forces supported the AA’s request for elections to be held in Rakhine so that citizens could exercise their right to vote.

Zaw Htay, spokesman of the President’s Office, said that the government will negotiate holding elections in townships where voting had been suspended.

Political analyst and writer Than Soe Naing pointed out that the military no longer is referring to the AA as a terrorist organization, as the government previously designated the rebel army.

“It has resolved one of the issues hindering the peace process,” he said. “This compromise on the election could open the door for more peace negotiations.”

Negotiators involved in Myanmar’s peace process could not be reached for comment on the prospects of talks between the AA and the military.