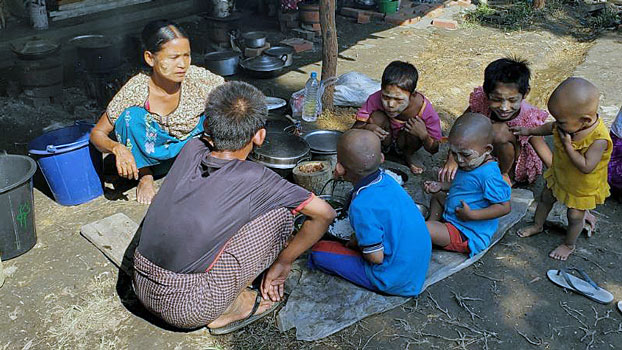 An elderly woman at one of dozens of war refugee camps in Myanmar’s Rakhine state has tested positive for COVID-19, the first confirmed case among more than 200,000 people displaced by nearly 23 months of fighting, government authorities said Friday as a WHO official predicted more cases.

A surge of COVID-19 cases beginning in August has alarmed Myanmar health authorities and relief workers in Rakhine, where an estimated 226,000 internally displaced persons (IDPs) are sheltering in some 26 official camps as well as in Buddhist monastery compounds or with friends and relatives.

The mostly ethnic Rakhine refugees have been driven from their homes by fighting between Myanmar government forces and the Arakan Army (AA) that erupted in December 2018. Fierce fighting, including the use by government forces of air power and artillery, has gone on without pause during the pandemic.

The first case announced by the Ministry of Health and Sports is an 80-year-old woman who was staying with more than 130 others at a Buddhist monastery-based IDP camp in Kyauktaw, a scene of repeated fighting.

The case emerged as the Myanmar representative of the World Health Organization told RFA that despite a massive effort to prevent “generalized community transmission,” particularly in the hotspots of Rakhine and the populous commercial capital Yangon, recent developments point to more infections.

“We are also on a path where we know there is more transmission happening, and we need to make every effort to capture it and to target our interventions to that situation,” he added, speaking of the nationwide situation.

“Cooperation from all people is very important,” Jost said.

The elderly woman, whose name was withheld, was diagnosed with COVID-19 when she went to see a doctor after four days of illness and breathing problems.

“The patient came to hospital for treatment with symptoms of shortness of breath and high fever,” said Dr. Than Tun Oo, the head of Kyauktaw Hospital, where the woman first was taken.

“She tested positive for the coronavirus. We sent her to Sittwe hospital the next day,” he said. The Rakhine state capital Sittwe is 75 kilometers (46 miles) from Kyauktaw.

“Now, we have sanitized the whole hospital and quarantined those in the IDP camp where she lived,” he added.

Than Tun Oo said tracing the 80-year-old first IDP patient’s infection was difficult because crowded camp conditions made it impossible for residents to practice social distancing.

“If they can’t maintain social distancing, it will be a big problem soon,” Than Tun Oo said.

Zaw Zaw Tun, secretary of the Rakhine Ethnics Congress, a local relief NGO, warned authorities that refugees would try to leave in search of food and personal protective equipment unless it was provided in the camps.

“It is impossible to quarantine the entire camp since they are IDPs,” he said.

“If the authorities need to lock down the camp, then they need to provide enough food, PPE and other necessary items. Only then will the IDPs not try to leave, and the outbreak can be contained.”

Maung Aye Saw, secretary of a volunteer committee helping the IDPs in Kyauktaw, said the supply of face masks from donors at the camps was low and that the IDPs had not had hand sanitizer for a while.

“We’ve relied only on washing our hands with soap and water in the camp,” he said. “I would like to appeal to the government to provide these materials.”

Though the IDPs have received some rice, cooking oil, and salt rations, they must try to find other necessities on their own, Maung Aye Saw said.

“Currently, we are facing an uphill struggle to provide enough food for both people in the IDP camp and ordinary people in town,” he said.

“Finding a COVID-positive person now complicates the situation pretty badly here,” he said. “I’ve visited all the camps, and they are struggling to put food on the table.”

Win Myint, Rakhine state’s spokesman and municipal minister, was not available to comment on the situation, but he told RFA on Sept. 28 that the state was ready to help the IDP camps if they requested assistance.

As of Friday, Myanmar reported 33,488 confirmed COVID-19 cases, including 1,137 new ones, 799 total deaths, and 15,477 recoveries. Most of the cases have occurred in Yangon region and Rakhine state, the latter of which was where a locally transmitted case was detected in mid-August when the number of cases began to surge nationwide.

Kyauktaw township had 182 confirmed cases and one related fatality, as of Friday.

According to the Norway-based Internal Displacement Monitoring Center, Myanmar, a multiethnic country of 54 million people slightly bigger than France, had more than 450,000 IDPs from the Rakhine war, as well as long-running conflicts in Shan and Kachin states as of December 2019. Another 40,000 people in the country were displaced by natural disasters, it said.