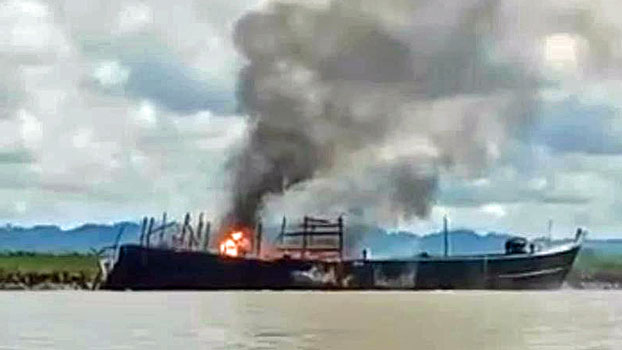 A boat hired by the ICRC to transport food supplies to IDPs floats in the Mayu River after being destroyed by an artillery attack and subsequent fire in Rathedaung township, western Myanmar's Rakhine state, Oct. 28, 2020.
Photo courtesy of a citizen journalist

One man was killed and two others were injured in a Myanmar Navy artillery attack Wednesday on a boat hired by the Red Cross to deliver aid to civilians displaced by armed conflict in western Rakhine state, witnesses to the clash said.

The vessel was hit and set ablaze as it traveled on the Mayu River between Pyin Win and Kan Pyin villages in Rathedaung township, one of several areas in Rakhine where Myanmar forces have been fighting the rebel Arakan Army (AA) for nearly two years.

The death was not the first aid worker killing in the Rakhine conflict. As in the shooting death in April of a World Health Organization driver killed by gunmen as he carried coronavirus test samples from the conflict zone to be tested, both sides blamed the other for the ambush.

The boat was transporting food supplies for the International Committee of the Red Cross (ICRC) to internally displaced persons (IDP) camps in Rathedaung and neighboring Buthidaung township.

Maung Chey, 20, was killed in the attack, while Maung Than Wai, 34, and Hla Win Maung, 50, were injured, said Kan Aye Chan, another man aboard the vessel.

The four men had been hired by the relief organization to transport ICRC supplies by boat with permission from the Rakhine state government, and had been on the job for three months, he said.

“Around 11 a.m near Pyaine Taw village on the Mayu river, we saw them (troops on a navy vessel). When I asked them to come to us, they started shooting at us with small weapons," said Kan Aye Chan, adding the navy vessel was 800 meters away.

"We carefully slowed down the boat as they were approaching. We were waiting for them with ICRC documents in hand to show them," he said, referring to letters from the ICRC and the Rakhine state government.

"At the time, another (reinforcement) vessel arrived and they started firing with heavy weapons, without notice, which hit our fuel containers and exploded with fire. They fired maybe more than 100 rounds at us," said Kan Aye Chan.

We four were hiding in the bottom of the boat. Because of the fire and explosion, one of the crewmen died and two were injured.”

A villager from nearby Pyin Win village, who declined to give his name for safety reasons, said the boat was carrying ICRC food aid for displaced ethnic Rakhines and Muslims in Buthidaung’s Sin Khone Taing village.

“They fired heavy artillery and machine guns, and the boat got hit and caught fire,” he said. “The injured men were sent to the regional hospital. The other man was killed by the gunshots. We rescued the survivors once they stopped firing.”

The ICRC’s office in Rakhine’s capital Sittwe confirmed that the organization had hired the boat to transport the supplies.

The Myanmar military issued a statement about the incident along with a short video recording of a burning vessel, saying that AA members onboard the boat had fired at them.

Government troops fired back, and later the boat burned and sank into the river, the statement said. It also said that the ICRC confirmed with the military that the boat did not belong to the organization.

The ICRC later issued a statement saying that it had hired the men and the boat to transport the food supplies, and that none of its own employees were onboard. The organization has suspended its operations in the region while it investigates the incident, it said.

Rejecting the military’s account, however, AA spokesman Khine Thukha said there were no clashes between AA soldiers and Myanmar forces in the area where that boat was attacked.

“This is an incident in which the Myanmar military has committed war crimes against civilians by indiscriminately firing on them,” he added.

Moe Chey, who is helping displaced civilians in the area, said that the ICRC had informed the Myanmar Navy beforehand about the supply boat.

“They said they had informed the navy, but the vessel was hit by the naval boat near [the] village,” she said. “The boat was burning. I could see the smoke from the village.”

Khin Maung Latt, an upper house lawmaker from Rathedaung township, said it is unacceptable for the government military to fire on boats transporting aid.

“The military troops are required to avoid attacking civilian vessels, not to mention the ICRC’s vessels,” he said. “They are delivering much-needed aid to the IDP [internally displaced persons] camps. They should be safeguarding the boat.”

RFA could not reach Myanmar military spokesmen for comment.

A report presented in April by Michelle Bachelet, the U.N. high commissioner for human rights, to the Human Rights Council in Geneva said the Myanmar military had committed possible war crimes against Rakhine civilians with airstrikes by fighter jets, helicopter and heavy artillery attacks, and fighting close to densely populated residential areas.

“For the most part, however, it appears that the Arakan Army was not active or present in the areas where these attacks took place, and no armed clashes were reported to have been ongoing at that time,” the report said.