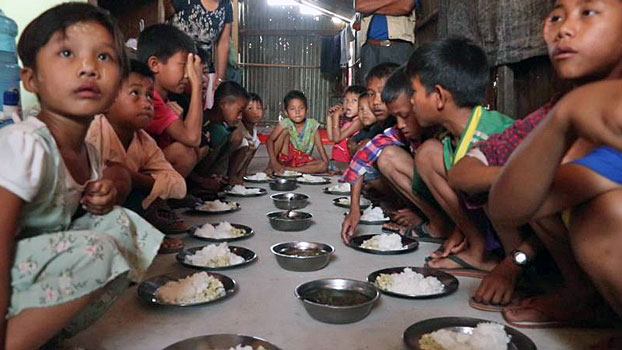 Myanmar’s conflict with the Arakan Army in Rakhine state has caused severe food shortages in a small corner of adjacent Chin state, where residents of some 200 villages are trapped by roadblocks and mandatory coronavirus lockdowns, a humanitarian worker said Thursday.

As many as 60,000 residents of remote villages of Paletwa township, a Rakhine-speaking area in southern Chin that borders Rakhine state, are cut off from the closest food markets in Paletwa town — blocked by the warring armies or locked down by local authorities amid a resurgence in the COVID-19 pandemic, said Mai Nan Wai, spokesperson for the Relief and Rehabilitation Committee for Chin IDPs (RRCCI).

For the past 21 months, the rebel Arakan Army (AA) has fought government forces in northern Rakhine state and in Paletwa township — areas where it seeks to assert control to secure greater autonomy for ethnic Rakhine people in their historic homeland along the Bay of Bengal near Bangladesh. The fighting has left nearly 300 civilians dead and displaced more than  220,000 others.

The road blockages and lockdowns have meant that villagers in Paletwa township have seen their supplies of rice dwindle over recent months.

More than 200 of 400 villages in Paletwa township may be in desperate need of rice, Myanmar’s staple food, Mai Nan Wai said.

“All villages close to Paletwa are trapped now,” she told RFA’s Myanmar Service.

She said residents of Tone Ma village contacted her group for rice supplies, while all communities close to Samee town and along the Kaladan River are also experiencing shortages.

“They have been cut off from Paletwa,” she said. “The villages south of Samee are close to Kyauktaw in Rakhine state, but AA troops are active in that area, so we cannot send rice supplies there.”

Many elderly people in the villages have chronic illnesses such as diabetes and  paralysis are facing a shortage of medicine because they cannot get to cities and the RRCCI cannot get to them, Mai Nan Wai said.

The humanitarian group estimates that 26,000 to 60,000 displaced Chin civilians are now trapped in their villages, while more than 18,000 have left their homes and sought shelter in cities during the armed conflict.

State officials are sending donations from the government, the public, and the RRCCI directly to villages so residents can buy food themselves, Chin state Municipal Minister Soe Htet told RFA on Sept. 19, though he indicated that this alone would not alleviate severe food shortages.

Some civil society organizations are also working with state officials and donating money, while the UN World Food Programme is trying to help civilians living in displacement camps, he said.

“But it is very challenging for people who live outside the IDP camps,” Soe Htet said, referring to those still in villages. “We need the help of the Union government and the military to get things done.”

Villagers said the money would be of no use since they cannot go anywhere to buy food, but that the need for rice supplies was urgent.

Taung Min, a resident of Paletwa’s Kaytha village, said people are afraid of being shot if they leave their homes to travel to buy food.

“All the roads are closed,” he told RFA. “For now, we are just eating what we have. The food supplies are running low. We can’t travel down south. If we do, they will shoot us. We cannot buy food anywhere. All the gates are closed now.”

A pastor from Paletwa township who declined to be identified out of fear for his safety said conditions there are growing worse, and aid workers can now safely reach only 30 villages.

“Even in Paletwa town, a bag of rice costs more than 65,000 kyats,” he said. “Now all the roads connected to town are closed.”

One displaced resident, who also declined to provide his name, said that rice supplies would not be delivered to at least 100 villages in Paletwa township until October.

A former Chin state minister wrote on his Facebook page that villagers who have tried to bring back rice from other areas have been robbed on their return trips and have not been able to enter Paletwa because of the lockdown to contain the spread of the coronavirus.