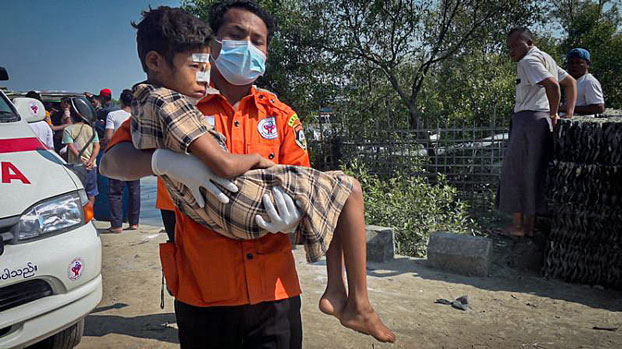 An emergency medical technician carries a child injured by a landmine explosion in Maungdaw township, western Myanmar's Rakhine state, as he is being transported to Sittwe General Hospital for medical treatment, Nov. 17, 2020.
RFA

Myanmar's military should be put back on the United Nations secretary-general’s “list of shame” for grave violations against children in the conflict in Rakhine state between the government military and a rebel ethnic army, Human Rights Watch said.

In June, U.N. Secretary-General António Guterres removed the Myanmar military from his annual “list of shame” conditioned on the Myanmar government immediately ending and preventing the recruitment and use of child soldiers. Myanmar’s army was found by the U.N. chief in 2018 to have 71 cases of child recruitment.

An article posted on New York-based HRW’s website on Tuesday pointed to an incident in the war-torn state on Oct. 5 when a military column conscripted 15 Rohingya Muslim civilians, including children, to guide soldiers through terrain believed to be mined by the rebel Arakan Army (AA).

Two young cattle herders were killed and an adult was injured when the column was ambushed by AA troops, villagers had told RFA, which originally broke the story.

Immediately following the incident, the Myanmar military denied that shooting by government soldiers killed the two children and wounded the adult, instead blaming the AA for firing on the civilians.

“Using civilians as ‘human shields’ is a war crime, as is using children in combat. The Tatmadaw [Myanmar military] says it will investigate the deaths, but this incident highlights a deeper problem,” said the HRW report, written by Myanmar freelance journalist Manny Maung, who also identifies herself on her LinkedIn profile as a part-time communications consultant for UNICEF.

The United Nations Country Taskforce on Monitoring and Reporting on Grave Violations against Children in Myanmar has called for a transparent and expedited investigation of the incident and for those responsible to be held accountable, the report noted.

“This recent incident shows that the Tatmadaw is still making use of children in hostilities, violating the terms of the ‘delisting,’” the HRW report said. “The secretary-general should return the Tatmadaw to his list for the recruitment and use of children.”

HRW also said that the U.N. Security Council should sanction Myanmar authorities “implicated in the sickening practice of using civilians, and children in particular, as human shields.”

“These are war crimes for which all those responsible should be prosecuted,” the report said.

RFA could not reach spokesmen for the military, Myanmar’s social welfare, relief and resettlement ministry, or the President’s Office for comment on HRW’s statement.

Human rights groups have decried the use of civilians, including children, as forced porters and human shields by the Myanmar military and some non-state armies has gone on for decades amid the country’s various internal conflicts pitting government forces against ethnic armies in the border regions.

In 2019, the Myanmar government set up a Committee on the Prevention of Grave Violations against Children in Armed Conflict and enacted a Child Rights Law to align its national policies and regulations with those of the U.N. Convention on the Rights of the Child. The law prohibits the violation of children’s rights during armed conflict and makes it illegal for soldiers to use minors as forced laborers.

Myanmar ratified the U.N. convention in 1991, agreeing to prohibit all forms of violence against children under the age of 18. It also criminalizes six grave violations against children and grants them legal protections.

In response to the scores of children killed, maimed, and conscripted as laborers in the country’s ongoing ethnic wars, the government in July said it was setting up a national complaint mechanism for reporting violence and sexual crimes against minors in regions under conflict.

Meanwhile, the U.S. mission to the U.N. condemned ongoing serious human rights violations and abuses across Myanmar, including Rakhine state and other areas of unrest, and called on Myanmar authorities to deepen democratic reforms.

The U.S. mission on Wednesday also called for an assurance of accountability for those responsible for human rights violations and abuses, including for the ethnic cleansing of Rohingya Muslims from northern Rakhine state during previous military-led crackdowns.

“We strongly condemn the ongoing violence in Myanmar and urge all involved to demonstrate restraint and respect for the human rights of members of affected populations,” said a statement delivered by Jason Mack, the U.S. mission’s counselor for economic and social affairs. 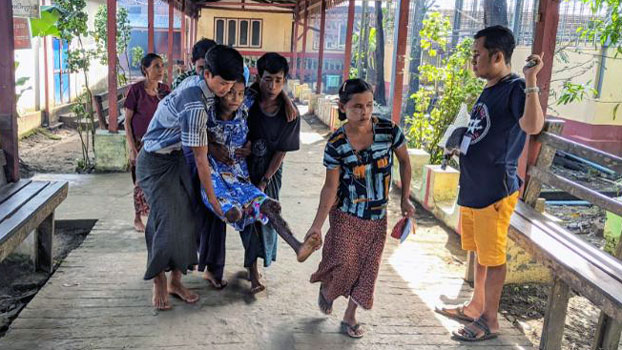 Villagers carry a child injured by a landmine explosion in Ponnygyun township, western Myanmar's Rakhine state, as he is being transported to Sittwe General Hospital for medical treatment, Nov. 3, 2020. Credit: RFA

Zaw Zaw Tun, secretary of the Sittwe-based relief group Rakhine Ethnics Congress (REC), said the Myanmar military has stepped up its questioning of minors in combat zones in the western state.

“When government troops go to villages, they detain and question villagers, not for a couple of days but for weeks, even up to 15 days,” he told RFA. “These days, they even take children to interrogate as a new method of gathering intelligence. More children are now being detained and questioned.”

Children in Rakhine state are among the more than 300 civilians who have been killed and over 700 injured amid fighting in the nearly two-year-long war or from airstrikes near their homes, schools, or playgrounds, according to civil society groups. Others have been injured by landmines or arrested by soldiers on suspicion of having connections to the AA.

Of these figures, 46 children up to age 18 have been killed, and 148 others have been injured, according to an RFA tally.

Rights activist Nickey Diamond from Southeast Asia-based Fortify Rights said he believes the U.S. secretary-general should put the Myanmar military back on his “list of shame.”

“The Myanmar military should be reinstated because there is a lack of transparency, especially from the military,” he said. “In other countries, [U.N. organizations] can enter and inspect or inquire about what the military is doing, according to international rules and regulations. There is no such transparency in this country.”

“Although the military has denied recruiting child soldiers, there are reports about recruiting in various ways,” he said, recommending that the U.S. set up a mechanism to investigate the use of child soldiers by Myanmar troops.

Maung Maung Lay of the Human Rights Defenders and Promoters NGO noted that his organization has received no more than 10 complaints per year about the recruitment of child soldiers since 2010, though children are still being used indirectly in armed conflict.

“Although they are not directly recruiting them as child soldiers, armed groups are using children for noncombat activities such as guides to obtain intelligence or as reserve soldiers,” he said.

Aung Myo Min, executive director of the Yangon-based human rights education group Equality Myanmar, said that if war crimes against children were not stopped in Myanmar, they could be condemned by the international human rights machinery.

Myanmar military spokesman Major General  Zaw Min Tun told RFA on Nov. 11 that any related complaints would not be ignored.

“The government and the military have been working tirelessly if someone reports any issue not only in Rakhine, but in all war conflict areas,” he said.

Tun Win, a lower house lawmaker from Rakhine’s Kyauktaw township, said that he has reported crimes committed against civilians by lower-ranking soldiers to Rakhine state officials, but no action has been taken.

“We have sent letters to the Myanmar National Human Rights Commission, the president, and other top-level country leaders on these issues,” he said. “Only the Defense Ministry answered us once, saying it would form a tribunal to investigate the issues, but we haven’t heard anything more yet either about the formation of a tribunal or about an investigation.”

RFA contacted the President’s Office and the human rights commission for comment via e-mail, but had not received replies by the time of publication.