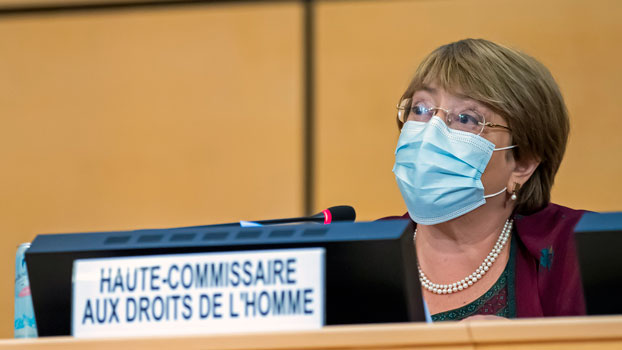 Michelle Bachelet, the UN high commissioner for human rights, speaks during the opening of the 45th session of the Human Rights Council at the UN's European headquarters in Geneva, Sept. 14, 2020.
AFP

The U.N.'s human rights chief on Monday said the Myanmar military’s brutal tactics in its 21-month-long war in Rakhine state were producing possible war crimes and that Naypyidaw had made no progress in resolving an earlier crisis sparked by the army’s expulsion of Rohingya Muslims.

Michelle Bachelet, the U.N. high commissioner for human rights, told the Human Rights Council in Geneva that hostilities between the Myanmar military and the Arakan Army (AA) had led to disappearances, extrajudicial killings, arbitrary arrests, torture, deaths in custody, and the destruction of property.

“Civilian casualties have also been increasing,” she said. “In some cases, they appear to have been targeted or attacked indiscriminately, which may constitute further war crimes or even crimes against humanity.”

Bachelet made the comments as she presented a report to the 47-member Council that provided detailed accounts of military actions in Rakhine state — “conduct which may constitute war crimes and crimes against humanity by the Tatmadaw in Chin and Rakhine states.”

“Tatmadaw units have undertaken widespread arbitrary arrests and detention of civilians. Use of torture and other cruel, inhumane or degrading treatment or punishment against detainees has also been alleged,” said the report, using the Burmese name for the powerful military.

Following Bachelet’s statement, Kyaw Moe Tun, Myanmar’s permanent representative to the U.N., said in prerecorded remarks that the Rakhine issue is “complex and delicate” and that the government has placed priority on finding a sustainable solution to it.

He went on to say that “terrorist attacks” in Rakhine were to blame for the current humanitarian crisis there, which has been complicated by fighting between the government army and the AA.

Kyaw Moe Tun also said that Myanmar is “willing and able to address the issue of accountability” and that the government has been taking necessary action based on the recommendations of its Independent Commission of Enquiry (ICOE) set up to probe the military-led crackdown on the Rohingya in 2017.

The ICOE said it its final report submitted to Myanmar President Win Myint that war crimes and serious human rights violations had occurred in Rakhine but did not have “genocidal intent.” 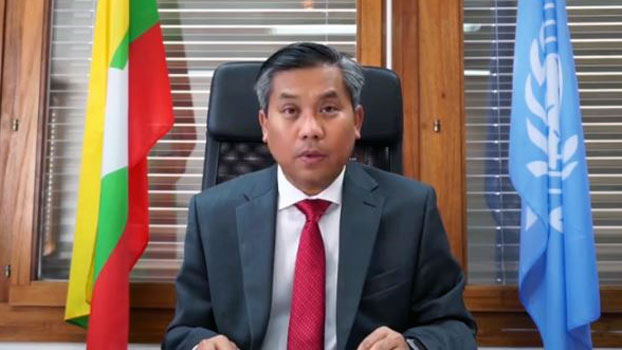 The new U.N. report noted that since last year there had been “a significant increase in incidents of airstrikes by fighter jets, and helicopter and heavy artillery attacks, and in ground battles in more densely populated civilian areas” in Rakhine state.

“For the most part, however, it appears that the Arakan Army was not active or present in the areas where these attacks took place, and no armed clashes were reported to have been ongoing at that time,” it said.

“The destruction of villages and civilian homes has caused suffering for civilians. Directing attacks against civilians and civilian objects constitutes a violation of international humanitarian law,” said the report, a follow-on to the U.N.-backed Independent International Fact-Finding Mission (FFM) on Myanmar, set up after the 2017 military campaign expelled more roughly 740,000 Rohingyas to Bangladesh.

Myanmar has made limited progress with the FFM’s recommendations to conduct independent and impartial investigations and to hold perpetrators accountable for human rights crimes committed not only in Rakhine but also in other parts of the country, Bachelet said.

“Three years have passed since the military operations in Rakhine created a terrible human rights crisis,” she said.

“The situation of many hundreds of thousands of Rohingya refugees and internally displaced people remains unresolved.”

The FFM's report issued in September 2019 found signs of genocidal intent in the 2017 crackdown and presented critical evidence that government security forces committed atrocities and serious crimes under international law.

Though the Council and the U.N. General Assembly have called for accountability for the violations, “no concrete measures have been taken,” Bachelet said.

National initiatives, including secretive and selective courts-martial and the national Commission of Enquiry, have been inadequate and fallen short of international standards,” she said.

A number of satellite images and eyewitness accounts indicate that areas in northern Rakhine have been burned in recent months, she said, while noting that the Myanmar government has contested the reports.

“This only underscores the need for independent, on-the-ground investigation,” added Bachelet.

In the meantime, government administrators have reclassified areas where Rohingya villages once stood, removing the communities’ names from maps and potentially altering how the land may be used, Bachelet said.

She expressed concern that evidence relevant to determining legal responsibility for acts committed during military operations in Rohingya communities before and after 2017 may be destroyed in the process.

The report cast doubt about Myanmar’s pledges to hold military personnel accountable for their actions in Rakhine.

“So far, the steps taken through its national commission and military justice processes appear to have been insufficient and to have replicated past patterns of delaying effective accountability processes and maintaining impunity,” it said.