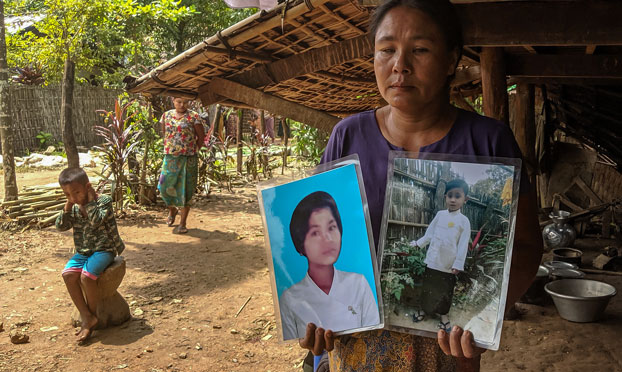 A recent rise in child casualties in northern Rakhine state comes as U.N. observers note an increased use of airstrikes and heavy artillery attacks on civilian communities by the Myanmar military in its 21-month-old conflict with the Arakan Army (AA), which says it fights for autonomy for ethnic Rakhine people who live in the coastal region.

Forty-two children under the age of 18 have died and 135 have been injured since December 2018 by artillery shelling, gunshots, and landmine explosions, according to groups that advocate for children. They are among nearly 300 civilians killed, and more than 640 injured in northern Rakhine state and in Paletwa township of next-door Chin state, according to an RFA tally.

In a conflict exacerbated by the coronavirus pandemic that has resurged in Rakhine, some 200,000 civilians have fled their homes to escape fighting and now live in official or makeshift displacement camps or in the homes of relatives, according to an estimate by the Rakhine Ethnics Congress, a local NGO.

On Monday, as the U.N.’s human rights chief issued a report in Geneva warning that the army’s actions in Rakhine could constitute war crimes, two teenagers were seriously injured by mortar shells that fell onto their village amid what witnesses said was an exchange of artillery fire by a Myanmar Navy vessel in the Mayu River and AA soldiers on land.

Residents of Rathedaung township’s U Gar village said Myanmar soldiers on the boat and troops in Rathedaung town fired artillery for more than an hour in response to the AA’s firing.

AA spokesman Khine Thukha said his army’s troops did not engage in combat with Myanmar forces along the Mayu River that day, and accused two navy vessels of intentionally firing artillery at the civilian villages.

A Myanmar military spokesman, however, said the troops were responding to 107-millimeter rockets and rocket-propelled grenades fired at the navy boat by the AA in a clash that lasted 30 minutes.

“Regarding the civilians who got injured, you can’t say it for sure it was caused by the military’s artillery. You can’t assume the military is responsible whenever there are artillery blasts,” he said. 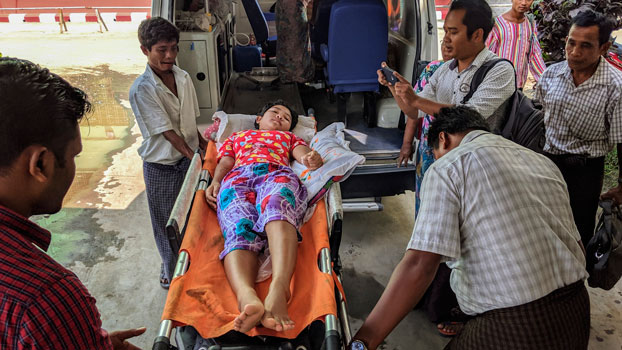 The report on Myanmar presented Monday by Michelle Bachelet, the U.N. high commissioner for human rights, based on interviews with more than 80 victims and witnesses whose accounts were verified, said that it was frequently the case that villages were attacked by the army without any AA provocation or presence.

“Tatmadaw tactics have shifted, with periodic reliance on airpower against the Arakan Army, but in some instances it appears that civilians may have been directly targeted,” the report said, using the Burmese name for the military, Myanmar’s most powerful institution.

The report went on to say that there had been a significant increase in the number of airstrikes by fighter jets, helicopter and heavy artillery attacks, and ground battles in more densely populated civilian areas.

“For the most part, however, it appears that the Arakan Army was not active or present in the areas where these attacks took place and no armed clashes were reported to have been ongoing at that time,” the report said.

Hardly a week goes by without reports of new Rakhine child casualties in conflict-affected areas.

On Sept. 11, a six-year-old boy was transferred from a regional hospital to Sittwe General Hospital’s emergency unit after sustaining serious injuries from an artillery blast in Rathedaung’s Aung Si Kone village.

Cho Cho, the boy’s mother, told RFA that the child was injured while the family was hiding in a bomb shelter under their house as a military boat patrolling the Mayu River approached their village and passed.

They waited until the boat was far from the village and then left the bomb shelter though they were still under the house, she said.

“At that time, we heard the blast,” Cho Cho said. “It shattered a ceramic pot, house fences, and a door. Artillery fragments from the blast came under the house [and] penetrated the child’s left shoulder to the bone.” 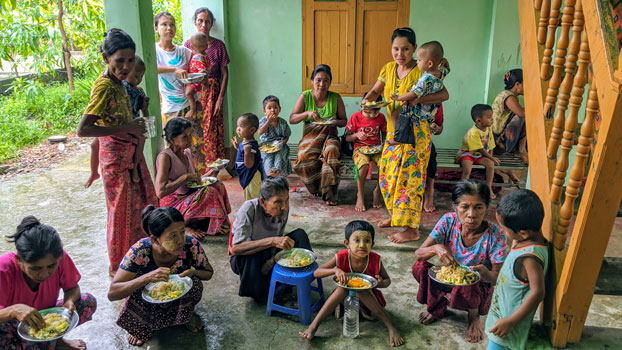 On Sept. 8, four civilians, including two five-year-olds, were killed, and a child was among several others injured by artillery blasts in Nyaung Khat Kan village in Rakhine’s Myebon township, drawing condemnation from UNICEF.

“Children should never be targeted during armed conflicts,” said UNICEF in a statement issued the following day.

Adults have become inured to exchanges of artillery fire between AA troops and military vessels patrolling the rivers of Rakhine state. Everyone hides in bomb shelters as a precaution whenever Myanmar navy vessels are on the river, villagers said.

Life during conflict is stressful for children, experts said.

“Children in Rakhine state are insecure, both physically and mentally,” said Oo Khin Thein from Sittwe-based Arakan Youth New Generation Network, referring to minors in “dire conditions” in both internally displaced persons (IDP) camps and in towns and villages.

“I found children in towns and villages in conflict areas who were physically injured by the armed conflict,” she said. “They are also emotionally impacted by trauma and fear of getting injured in artillery blasts. We see more and more children living in fear.”

Intensifying hostilities mean that nowhere in northern Rakhine is safe for anyone, said Oo Tun Win, a lawmaker from Kyauktaw township. 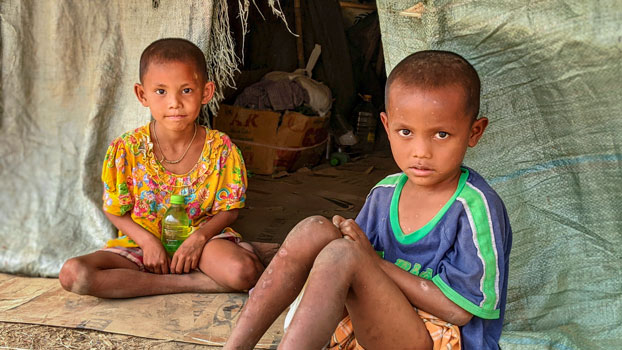 ‘Senseless’ shelling of a school

Myanmar forces also have detained a few minors on suspicion of having connections to the AA and charged them under the country’s Counter-Terrorism Law, said Myo Myat Hein, the director of the Thazin Legal Aid Group in Sittwe.

“In these cases, the accused children have not been given their rights under the Child Rights Law, [which] guarantees detainees immediate access to legal representation, though this is often not the case,” he said. “In many cases, the lawyers meet the detained children only when they are brought to trial.”

Those held in custody are sometimes subject to torture by authorities or disappear, their family members have reported, according to Myo Myat Hein, who is also known as Nyein Chan.

The annual report by the U.N.’s human right chief noted that schools, religious sites, and civilian homes in Rakhine have been targeted in attacks and damaged by heavy artillery and by Myanmar military patrols.

In February, at least 17 schoolchildren ranging in age from five to 12 were wounded when a mortar shell hit their primary school in Khamwe Chaung village in Buthidaung township, the report said.

The following month, soldiers set houses and a school ablaze and destroyed a local monastery with a rocket-propelled grenade in Minbya township’s Pha Bro village, it noted.

Save the Children called the injuries “senseless” and pointed out that they occurred on the same day that the U.N. expressed concern over the continuing humanitarian impact of conflict in western Myanmar and urged parties to respect international humanitarian law and to protect civilians.

“Many children are among these victims, and the actual number of casualties is likely to be higher due to limited monitoring and reporting in the conflict-affected areas,” the statement by Save the Children said.

UNICEF said the children of Rakhine face long-term repercussions because “their education is being hampered by attacks against schools and the use of schools by parties to the conflict.”

Myanmar has ratified the U.N. Convention on the Rights of the Child, which states that “governments must do everything they can to protect and care for children affected by war and armed conflicts.”

In 2019, the country also ratified the Optional Protocol on Children and Armed Conflict, whereby states agree to protect children from military recruitment and use in hostilities.